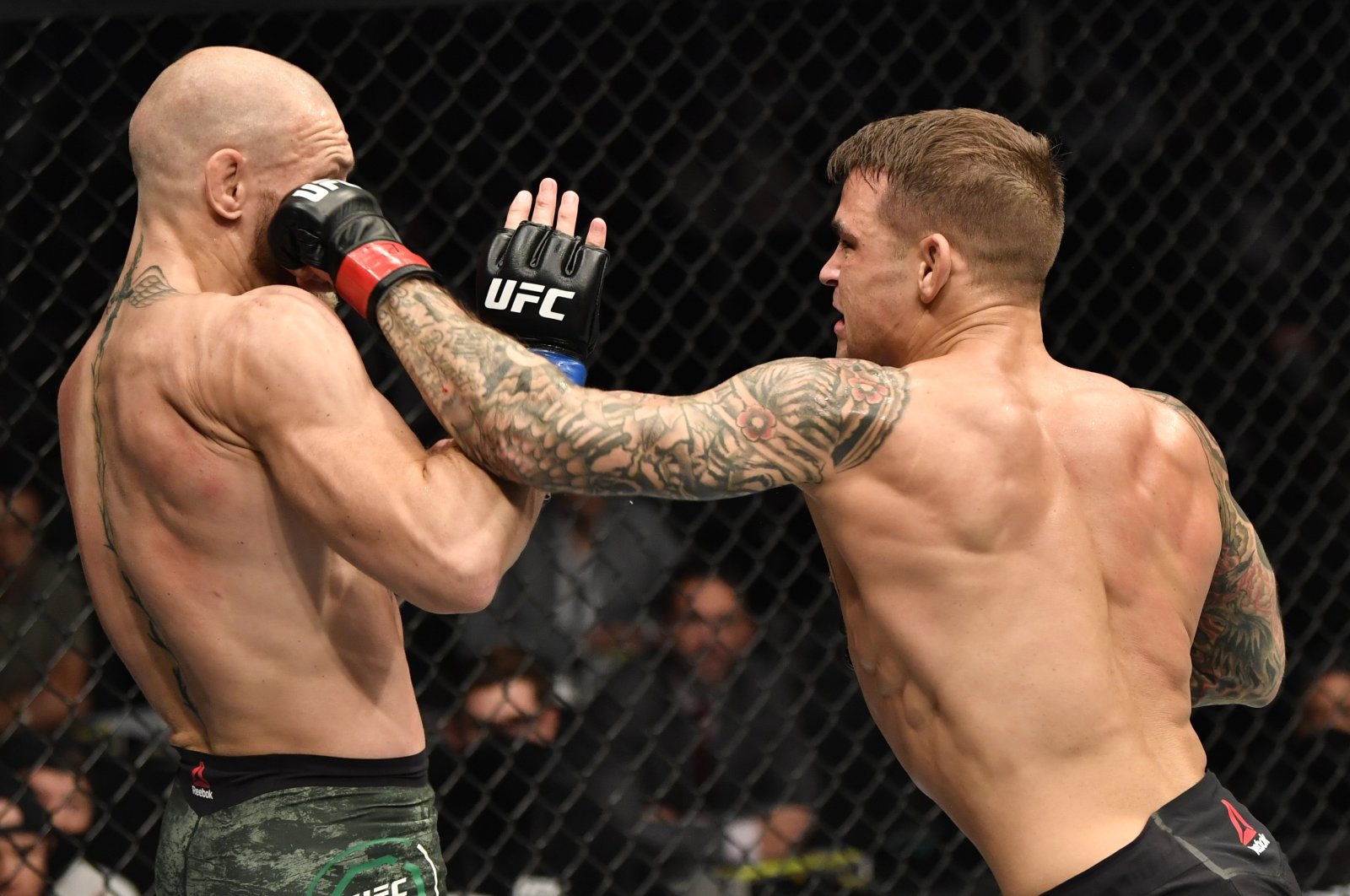 Dustin Poirier stopped Conor McGregor with a flurry of punches midway through the second round Sunday, avenging his loss to the Irish superstar with a knockout victory at UFC 257.

Poirier (26-7) caught McGregor with a series of shots to the head before buckling his knees with two left hands. Poirier then sent McGregor to the canvas with a short right hand and finished it at 2:32 of the second, setting off stunned excitement among the few thousand screaming fans allowed inside the Etihad Arena on Yas Island.

“I think this is a title fight,” Poirier said of their lightweight bout. “I’m the champion.”

In his first fight in a year, McGregor (22-5) had a strong first round before he was stopped by punches for the first time in his mixed martial arts career. McGregor, whose previous four losses all came by submission, stayed on the canvas for several moments afterward, gathering himself after his second loss in his three MMA fights since 2016.

“You know, it's hard to overcome inactivity over long periods of time,” said McGregor, who hadn't fought since beating Donald Cerrone in 40 seconds last January. “I just wasn't as comfortable as I needed to be, but Dustin is some fighter. If you put in the time, you're going to get cozy in here. I have to dust it off and come back, and that's what I will do. ... I'll take my licks, but I'm gutted.”

McGregor and Poirier met for the first time in September 2014 as featherweights, and McGregor won by knockout in just 106 seconds during his incredible early-career success. McGregor became the featherweight champion 15 months later, while Poirier rebuilt his career with just one loss in his next 11 fights.

With a second chance to derail McGregor while boosting his own hopes of regaining the lightweight title, Poirier didn't miss.

Sporting a shaved head and a beard, McGregor pushed the action early against Poirier, who landed an early takedown before getting backed against the cage for stretches of the first round. But Poirier bothered and battered McGregor with leg kicks throughout the fight before throwing the punches that ended it.

In the co-main event at UFC 257, three-time Bellator lightweight champion Michael Chandler made a stunning UFC debut with a violent knockout of New Zealand’s Dan Hooker midway through the first round.

Chandler could be the next matchup for Poirier in a fight for the lightweight title apparently vacated by long-reigning 155-pound (68-kilogram) champ Khabib Nurmagomedov, who announced his retirement after his final victory last fall. Nurmagomedov has beaten both McGregor and Poirier in the past 2 1/2 years.

UFC President Dana White so far has been unable to persuade Nurmagomedov to go back on his vow to his mother to quit the sport after his father's death, not even for a wildly lucrative rematch with McGregor, who repeatedly vowed to fight on after this loss to Poirier.

McGregor has not fought regularly in recent years, but his popularity was undiminished: UFC 257 is expected to be one of the most popular pay-per-view events in the promotion's history, according to White, and distribution problems in the U.S. early in the PPV portion of the card led fans to bombard social media and ESPN with complaints.

Chandler's long-anticipated UFC arrival was worth the wait for his 27th professional fight in a career that began in 2009.

After a deliberate start, Chandler (22-5) jabbed to the body as he lunged forward and caught Hooker with a left hand to the face that crumpled his opponent. Chandler finished a dazed Hooker with punches on the ground before climbing atop the cage and doing a full standing backflip into the octagon from atop the fence.

And Chandler was still fired up in his post-fight interview, calling the bout “the greatest moment of my professional life.”

"Conor McGregor! Surprise, surprise, there's a new king in the lightweight division," Chandler added. "Dustin Poirier, your time is coming. And Khabib, if you ever do see fit to grace us with your presence back here in the UFC octagon in your quest for 30 (victories), you know you've got to beat somebody, so beat me – if you can!”

Marina Rodriguez opened the pay-per-view portion of UFC 257 by upsetting fellow Brazilian strawweight contender Amanda Ribas. Rodriguez got a second-round stoppage with a flurry of punches and a knee in the opening minute.

UFC 257 concluded a run of three shows in eight days with a few thousand fans allowed inside the promotion's coronavirus bubble in the Middle East. The promotion hadn't held shows with fans since before the pandemic began last March.

The UFC returns to Las Vegas in two weeks for another run of shows at the fan-free Apex gym on its corporate campus.