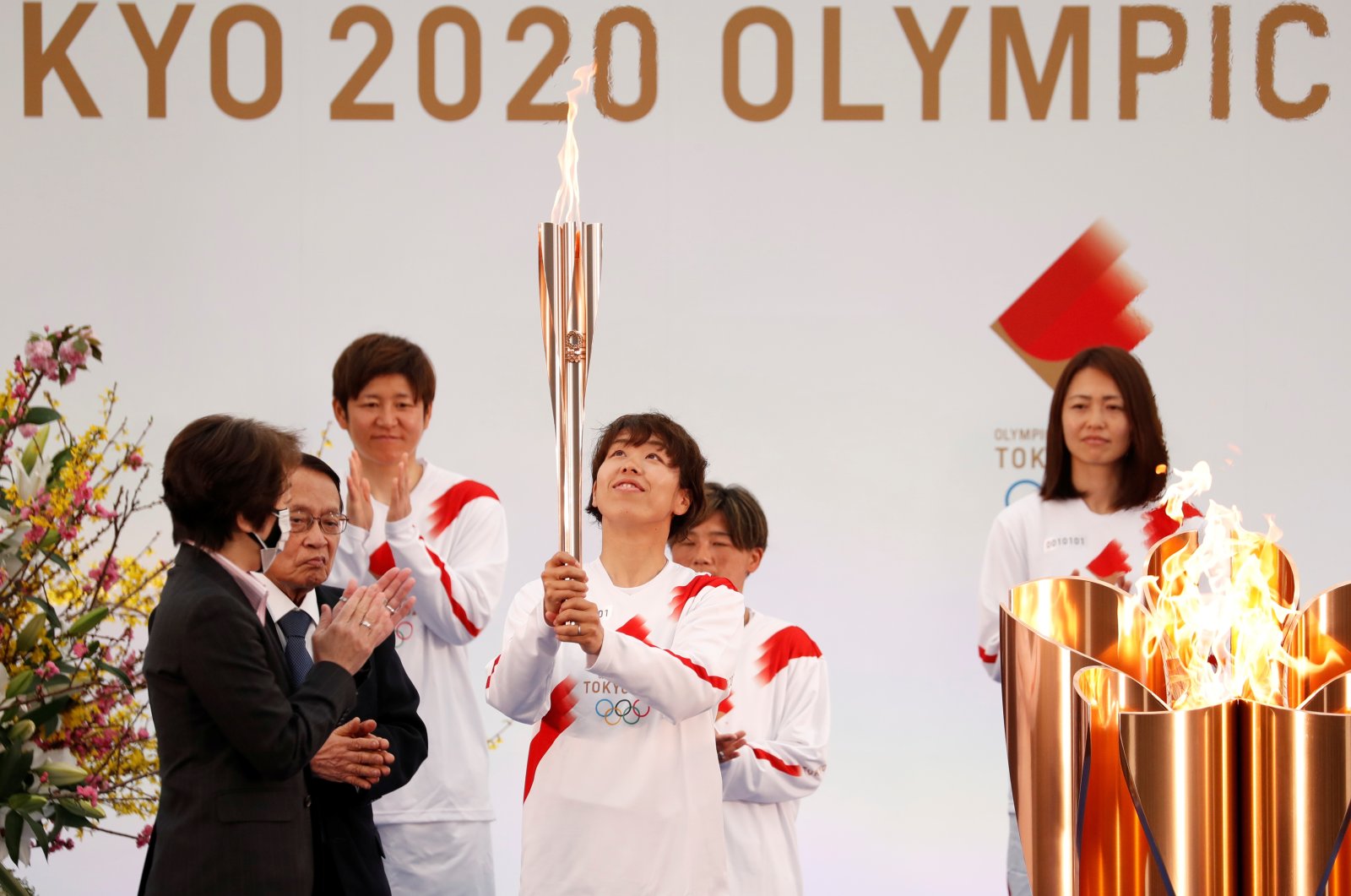 The torch relay for the postponed Tokyo Olympics began its 121-day journey across Japan on Thursday and is headed toward the opening ceremony in Tokyo on July 23.

The relay began in northeastern Fukushima prefecture, the area that was devastated by the 2011 earthquake, tsunami and the meltdown of three nuclear reactors. About 18,000 people died in the tragedy.

The first runner with the torch was Azusa Iwashimizu, a key player in the Japan team that won the Women’s World Cup in 2011.

Wearing a white tracksuit, she carried the torch out of the J-Village indoor soccer training center and was surrounded by 14 other members of that 2011 World Cup squad and coach Norio Sasaki at the rear. They were also decked out in white track suits.

The ceremony was closed to the public because of the fear of spreading COVID-19 but was streamed live.

“The torch of Tokyo 2020 will become a bright light for hope for Japanese citizens and citizens in the world and a light at the end of the tunnel,” said Seiko Hashimoto, the president of the local organizing committee and a former Olympian herself.

Homare Sawa, the biggest star on the 2011 team, missed the ceremony. She is being treated for a condition affecting her inner ear and had to withdraw from the event.

Fans were told to social-distance along the roadside as the torch passes, and they were to refrain from loud cheering. Organizers have said they will stop or reroute the relay if crowding becomes a problem during the four-month parade.

Spectators cooperated in Naraha Town, just down the road from where the torch started its trip. A few hundred people stood on the roadside and were safely spread out.

Setsuko Hashimoto, a 63-year-old local resident, was emotional as the torch passed.

“Ten years ago there was a nuclear accident so (seeing the torch) it felt like I could really look forward to something and live,” she said. "When you become my age, this is the last Tokyo Olympics and it’s here. It was very touching.”

Prime Minister Yoshihide Suga chimed in from Tokyo with a statement.

"The Olympic torch relay starting from today is a valuable opportunity for the people to get a real sense of the Olympics and Paralympics that are approaching,” Suga told reporters.

Local organizers and the International Olympic Committee hope the relay will turn public opinion in Japan in favor of the Olympics. Sentiments expressed in polls in Japan so far are overwhelmingly negative with about 80% suggesting another delay or cancellation.

The relay and the Olympics both stir fear that the events could spread the virus. There is also opposition to the soaring cost of staging the Olympics, now put officially at $15.4 billion. Several audits suggest it’s twice that much and a University of Oxford study says these are the most expensive Olympics on record.

The relay is a big test for the upcoming Olympics with fear among the public that the event could spread the virus to rural and more isolated parts of the country. Vaccinations have not been rolled out yet in Japan to the general public. About 9,000 deaths in the country have been attributed to COVID-19.

About 10,000 runners are expected to take part, with the relay touching Japan's 47 prefectures.

After the postponement a year ago, there was early talk of eliminating the relay to save money. However, that idea was quickly dropped with the relay heavily sponsored by Coca-Cola and Toyota.

The relay is a prelude to the difficulties the Olympics and Paralympics will present with 15,400 athletes entering Japan, along with thousands of other officials, judges, VIPs, media, and broadcasters.

Athletes will be kept in a “bubble” like atmosphere in Tokyo and will be limited to the Athletes Village on Tokyo Bay, the competition venues and training areas. Most others will be outside the bubble and will be kept at a distance from the athletes.

Organizers announced a few days ago that fans from abroad will be banned from attending the Olympics and Paralympics. Most volunteers from abroad have also been ruled out.

Organizers are to announce the venue capacities in April. Ticket revenue for the Olympics was to be $800 million but will be severely reduced by the lack of fans. Japanese government entities will have to make up the shortfall.