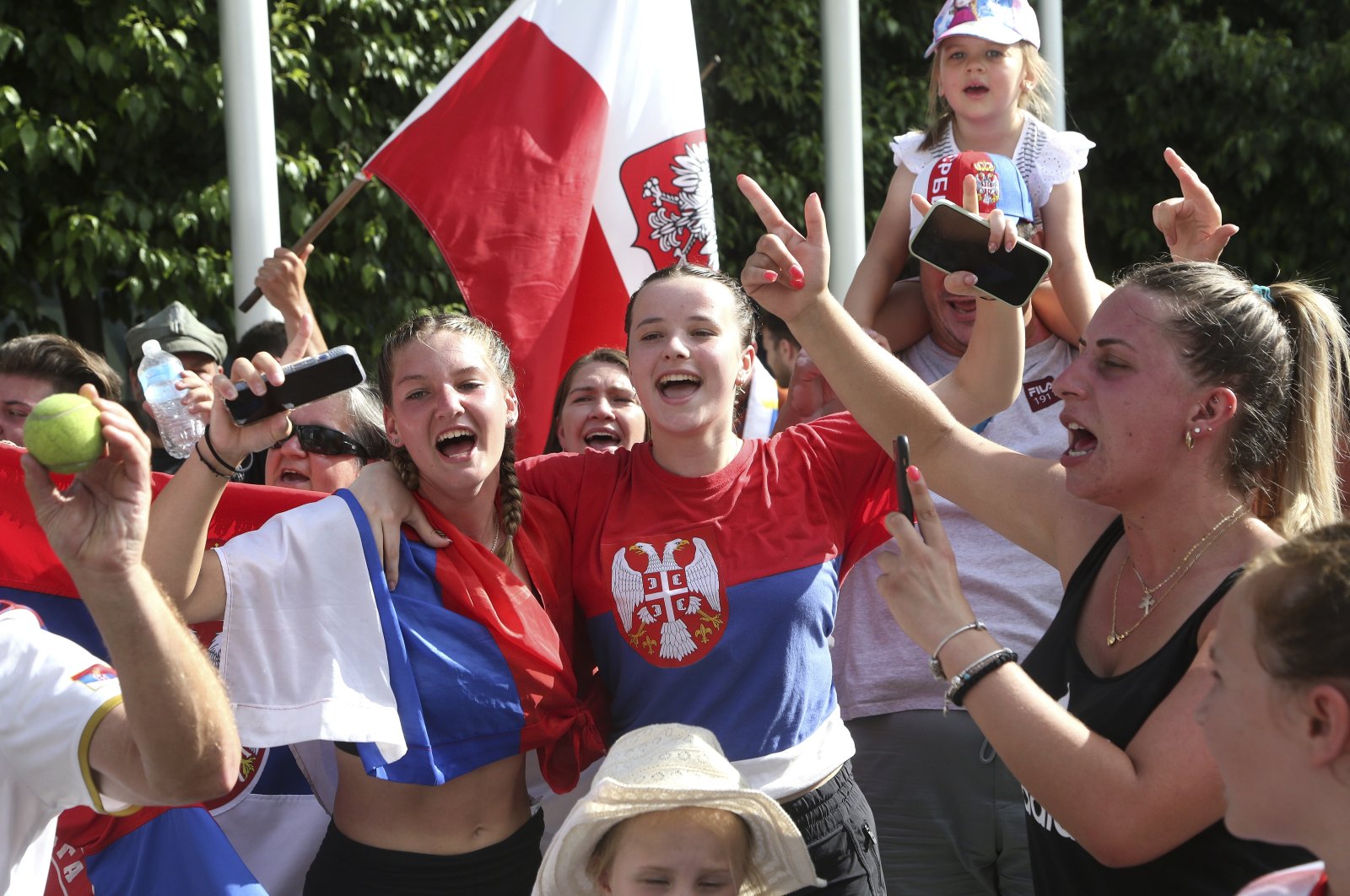 Fans of Serbia's Novak Djokovic react to news of his overturned ruling outside Federal Court ahead of the Australian Open, Melbourne, Australia, Jan. 10, 2022. (AP Photo)
by ASSOCIATED PRESS Jan 10, 2022 10:01 am

However, the world No. 1 tennis player's participation in the Australian Open still hangs in balance since the government lawyer said the Immigration Minister could consider exercising a personal power of cancelation

An Australian court on Monday reinstated Novak Djokovic's visa, which was canceled following his arrival last week over the Serbian's COVID-19 vaccine status.

Government lawyer Christopher Tran told the judge after the ruling that the minister for Immigration, Citizenship, Migrant Services and Multicultural Affairs, Alex Hawke, "will consider whether to exercise a personal power of cancelation."

That would mean Djokovic could again face deportation and could miss the Australian Open, which starts on Jan. 17.

The Australian government canceled 34-year-old Djokovic's visa shortly after he arrived in Melbourne late Wednesday to play in the Australian Open because officials decided he didn’t meet the criteria for an exemption to an entry requirement that all non-citizens be fully vaccinated for COVID-19.

Djokovic, who court documents say is unvaccinated, argued he did not need proof of vaccination because he had evidence that he had been infected with the coronavirus last month.

Australian medical authorities have ruled that a temporary exemption for the vaccination rule can be provided to people who have been infected with COVID-19 within six months.

Circuit Court Judge Anthony Kelly noted that Djokovic had provided officials at Melbourne’s airport with a medical exemption given him by Tennis Australia, which is organizing the tournament that starts on Jan. 17, and two medical panels.

"The point I’m somewhat agitated about is what more could this man have done?” Kelly asked Djokovic’s lawyer, Nick Wood.

Wood agreed with the judge that Djokovic could not have done more.

Transcripts of Djokovic's interview with Border Force officials and his own affidavit revealed a "repeated appeal to the officers with which he was dealing that to his understanding, uncontradicted, he had done absolutely everything that he understood was required in order for him to enter Australia,” Wood said.

Djokovic has been under guard in hotel quarantine in Melbourne since Thursday, when his visa was canceled.

But the judge ordered that the world No. 1-ranked tennis player be released from hotel quarantine during his court hearing. It was not clear where Djokovic relocated to during his hearing. He did not appear on screen in the first hours of the virtual hearing.

Djokovic's lawyers submitted 11 grounds for appeal against his visa cancelation. The lawyers described the cancelation as "seriously illogical," irrational and legally unreasonable.

Lawyers for Home Affairs Minister Karen Andres said in their submission that if the judge ruled in Djokovic's favor, officials might cancel his visa a second time.

They said the vaccination requirement could only be deferred for arriving travelers who have had a COVID-19 infection if their illness was acute.

"There is no suggestion that the applicant (Djokovic) had 'acute major medical illness' in December" when he tested positive, the written submission said.

The virtual hearing crashed several times because of an overwhelming number of people from around the world trying to watch the proceedings.

At one point, an expired court link was apparently hacked and broadcast pornography, The New Daily News website reported.

Djokovic is a nine-time Australian Open champion. He has 20 Grand Slam singles titles, a men’s record he shares with Roger Federer and Rafael Nadal.