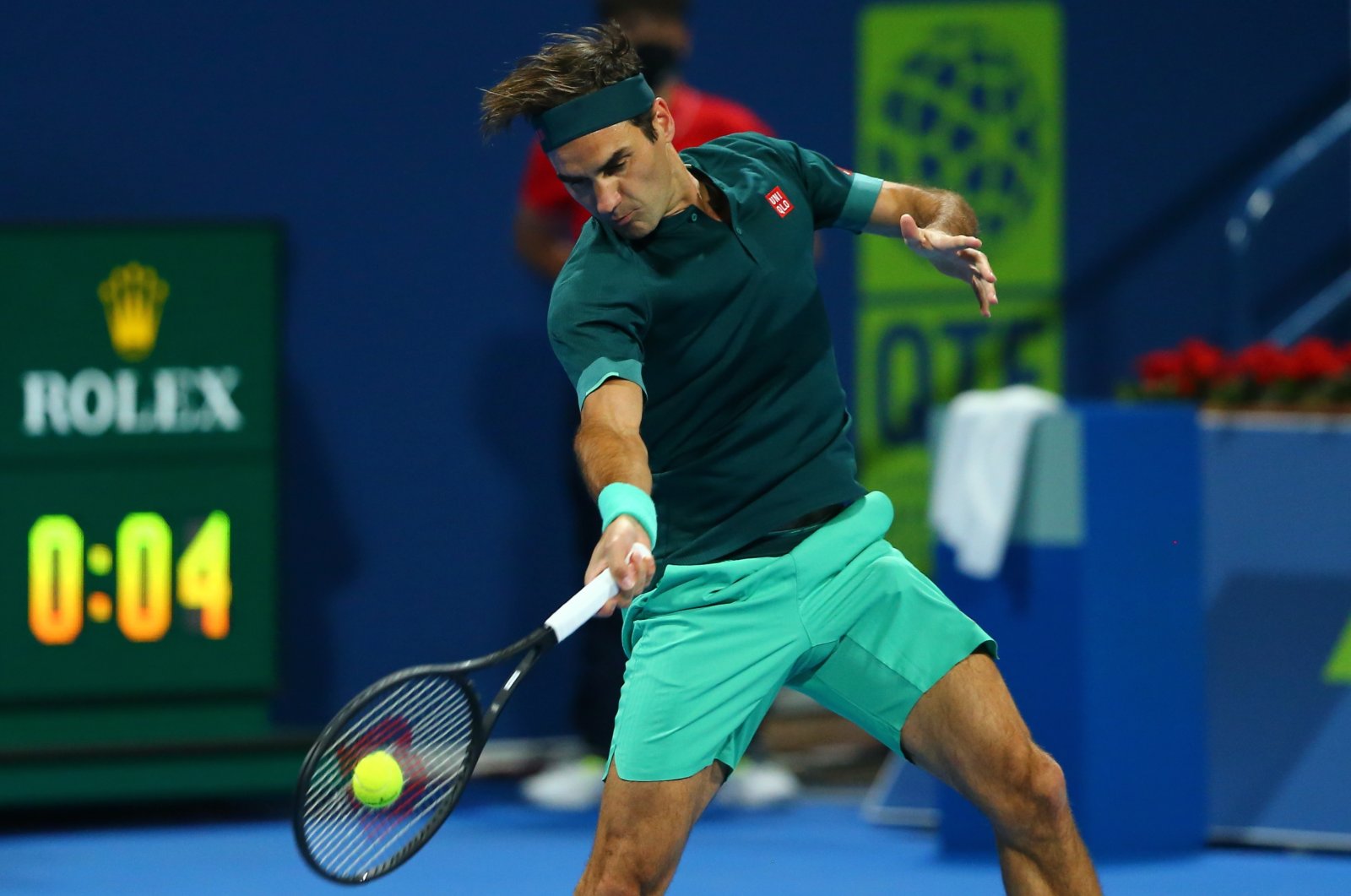 A handout photo made available by beIN Sports of Roger Federer of Switzelrand playing a forehand against Daniel Evans of Great Britain during their match at the Qatar Exxonmobil Open in Doha, Qatar, 10 March 2021. (EPA handout by beIN Sports)
by REUTERS Mar 10, 2021 9:36 pm
RECOMMENDED

The 14-month absence of Roger Federer finally came to an end as the veteran player returned to action at the Qatar Open on Wednesday beating Dan Evans 7-6(8) 3-6 7-5.

The 39-year-old Swiss had not played a competitive match for 405 days and underwent two knee surgeries in 2020, but clicked smoothly back into gear against the British number one.

A socially-distanced evening crowd at the Khalifa Tennis Complex were treated to a high-quality duel with Evans pushing the 20-times Grand Slam champion to the limit.

Federer showed great physical condition and kept his nose in front in the deciding set before pouncing in the 12th game to rifle a backhand winner down the line on his second match point.

It was a magical moment for Federer who said it had been a long and tough road since his last match, a semi-final defeat by Novak Djokovic at the 2020 Australian Open.

"It feels good to be back, happy to be standing here whether I won or lost," the evergreen Federer, who received a bye in the first round, said on court after his fourth win from four meetings against the skilful Evans.

"I was tired and focused on being tired rather than winning the points. If I was going to go out I wanted to go out swinging. Incredibly happy about my performance and it was nice to finish with a backhand winner down the line."

Federer and Evans had played around 20 practice sets in the build-up to the tournament, but the real test was how the Swiss, who recently pulled out of Miami Open, would hold up in real match conditions.

The answer was emphatic.

From the first point he struck the ball with his trademark panache and power and his serve was ruthlessly efficient.

Evans, whose game Federer clearly admires, stood firm, however, and brought up the first break point of the match with a superb backhand winner at 4-4, but Federer swatted away the danger.

Federer saved a set point in the tiebreak with a forehand, then Evans saved two before Federer nailed a crosscourt backhand that flew past the 30-year-old Briton.

Evans upped the intensity, though, and took the second set with a single break of serve.

It was the first competitive set Evans had won against Federer and he looked capable of claiming a notable victory before late errors allowed Federer to squeeze through.

"We'll see how I feel tomorrow and the next day and the next six months," Federer said. "It's been a long and tough road but I enjoyed it, it was a huge challenge and I had a wonderful team around me who supported me throughout."

After a traumatic year for the world and a testing one for tennis, the sight of Federer going through his silky repertoire again was a reassuring one.

"After everything I hope this was a bit of an uplift," said three-times champion Federer, who will face Georgia's Nikoloz Basilashvili in the quarter-finals.