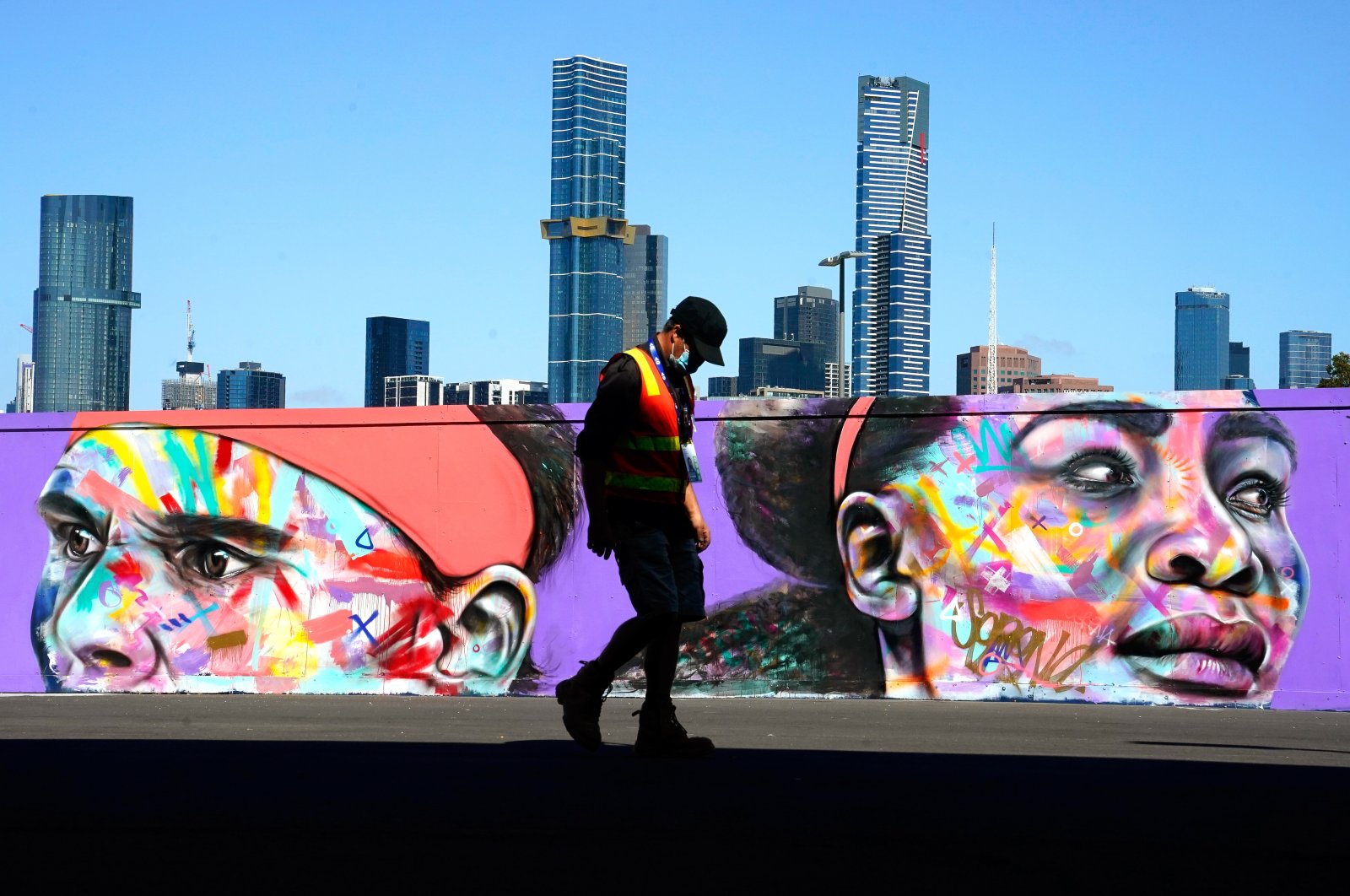 A worker in a protective mask walks inside the Melbourne Park tennis precinct in Melbourne, Australia, on Feb. 3, 2021. (EPA Photo)
by Agencies Feb 07, 2021 12:46 pm
RECOMMENDED

After a three-week delay, a massive logistical mission and a handful of health scares, a very different Australian Open gets underway on Monday with pandemic protocols providing a backdrop of caution to the action on the court.

Serena Williams begins her latest campaign to win a record-equaling 24th Grand Slam title on Day One while Novak Djokovic is also in action, the Serb seeking a record-extending ninth Australian Open crown.

Once dubbed the “Happy Slam” by Roger Federer, this year's edition might be remembered as the “Nervous Slam” after struggling to build enthusiasm in a wary host nation, but organizers hope the anxious buildup will be forgotten when the action begins.

Tennis Australia (TA) has made a Herculean effort to try to stage it safely and spent a fortune on biosecurity measures in a country where community transmission of the coronavirus has become rare.

It will be the third Grand Slam of the pandemic, with the US and French Opens passing safely enough.

Yet many in Melbourne regard it a pointless risk to the freedoms they earned after spending nearly four months in a brutal lockdown to crush an outbreak last year.

Warmup tournaments that packed out stadiums across the country a year ago have drawn tiny crowds to Melbourne Park over the past week, even with the game's biggest stars in action.

A smattering of COVID-19 cases among the 1,200 Australian Open players, coaches and other personnel that landed in the country last month did little to build momentum.

News that a worker at one of the tournament's quarantine hotels caught the virus triggered tighter social restrictions in Melbourne last week and saw 160 players isolate until cleared of infection.

Tournament director Craig Tiley asked the media to boost the tuneup events, but the modest crowds that turned up on Saturday were denied the chance to watch Williams and other former champions after they pulled out of their matches rather than risk injury ahead of the main event.

Melbourne Park is usually heaving with fans, but crowds will be capped at 30,000 per day during the Grand Slam, about half normal capacity. They will have to wear masks in the show courts if the roofs are closed. Digital tickets and the division of fans into three zones will make contact tracing easier if required.

This will be Rafael Nadal's first chance to grab sole possession of the men’s mark for most Grand Slam singles titles. He pulled even with Roger Federer at 20 by winning the French Open in October, beating Djokovic in a lopsided final.

However, Nadal admitted Sunday he had been "suffering" for 15 days with a sore back and could not guarantee he'll play the Australian Open, with the injury threatening to derail his bid for a record 21st Grand Slam.

"The muscle is still tight, so is difficult to play with freedom of movements," he told a pre-tournament news conference Sunday. "Let’s hope (the) situation keeps improving.”

A second Australian Open trophy also would allow Nadal to become the first man in the Open era to win each Grand Slam tournament at least twice. He has 13 championships at Roland Garros, four at the US Open, two at Wimbledon. He still would have work to do to catch Williams: She already has 23 Slam singles titles (plus 14 in doubles and two in mixed doubles), the most by anyone in the Open era. Only one player owns more: Margaret Court, with 24 – 11 after professionals were admitted to major tournaments.

For Djokovic, in addition to trying to break his own record for most men's titles at the Australian Open by getting No. 9, and trying to ensure he will eclipse Federer for most weeks at No. 1 in the ATP rankings, there is the matter of closing the Grand Slam gap. Adding another major championship would give him 18 – two behind Federer and Nadal.