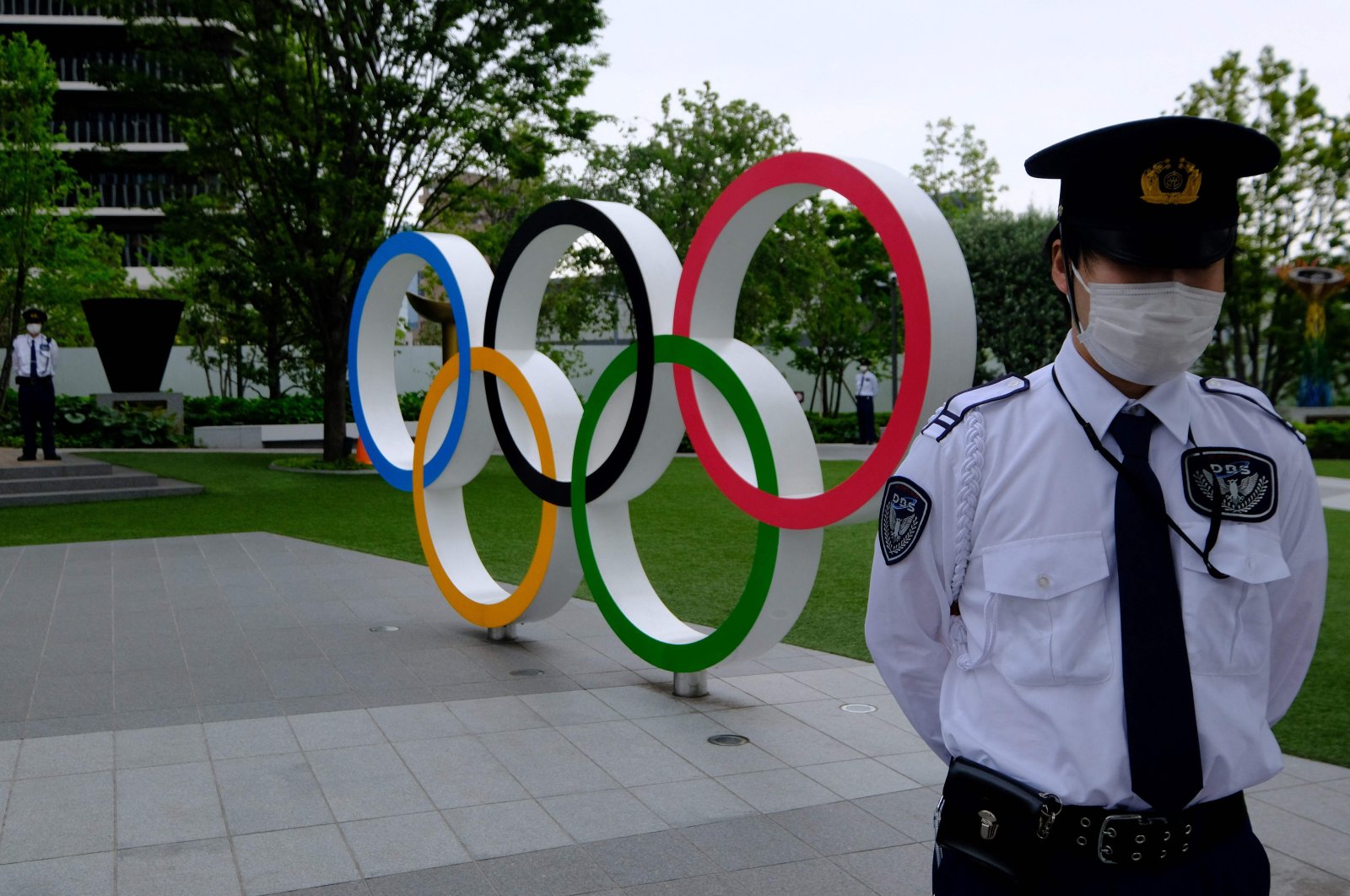 Security guards keep watch next to the Olympic Rings while people take part in a protest against the hosting of the 2020 Tokyo Olympic Games, in front of the headquarters building of the Japanese Olympic Committee in Tokyo, Japan, May 18, 2021. (AFP Photo)
by REUTERS May 25, 2021 12:54 pm
RECOMMENDED

With less than two months to go for the Tokyo Olympics, a U.S. advisory against travel to Japan over growing coronavirus concerns will not affect the Games, top Japanese officials said Tuesday.

They also reiterated that the U.S. support for the COVID-delayed Games was unchanged.

The U.S. State Department's "Do Not Travel" advisory and guidance for Japan on Monday did not mention the Olympics specifically but warned against visiting the country now.

"At present, we can see no particular impact," Olympic Minister Tamayo Marukawa told a news conference. She noted that the advisory did not ban essential travel and the U.S. Olympic & Paralympic Committee had said planned mitigation practices would allow for safe participation of Team USA athletes.

Japanese and Olympic officials have pledged the Games will go ahead as planned on July 23 after being postponed in 2020, even as surveys show a majority of Japanese want the Games canceled or postponed due to worries over coronavirus.

"There is absolutely no change in the United States' support for Japan's decision to hold the Olympics, we believe," Kato said.

In its new guidance, the U.S. Centers for Disease Control and Prevention said travelers should avoid all travel to Japan.

"Because of the current situation in Japan even fully vaccinated travelers may be at risk for getting and spreading COVID-19 variants," it said.

Australia has also advised against travel to Japan due to health risks from COVID-19 and disruptions to global travel.

Japan has avoided the large-scale infections suffered by many other nations, but a fourth wave has triggered states of emergency in Tokyo, Osaka and other localities across the nation.

The governor of Osaka said on Tuesday the prefecture would seek to extend the emergency beyond the current end date of May 31.

The country, which has recorded 715,940 infections and 12,308 deaths from the virus, has delivered vaccinations to just under 5% of its population, the slowest among the world's larger, rich countries.

Defence Minister Nobuo Kishi told a parliamentary panel the government was arranging to send military medical personnel to the Games at the request of organizers but added the move would not affect mass vaccination sites set up by the military in Tokyo and Osaka, the Nikkei newspaper reported.

The U.S. Olympic & Paralympic Committee (USOPC), which oversees Team USA, said in a statement to Reuters that it was aware of the updated State Department advisory on Japan.

"We feel confident that the current mitigation practices in place for athletes and staff by both the USOPC and the Tokyo Organizing Committee, coupled with the testing before travel, on arrival in Japan, and during Games time, will allow for safe participation of Team USA athletes this summer," the statement said.

Ruling Liberal Democratic Party heavyweight Toshihiro Nikai also said he saw no direct impact on the Olympics from the U.S. travel advisory but added that there were important practical issues that remained to be resolved.

International spectators will not be allowed to enter Japan to attend the Games but a decision has yet to be made on domestic viewers.

Banning overseas spectators will cut the economic boost from the Games by 151.1 billion yen ($1.39 billion) while a full cancellation would mean a lost stimulus of 1.8 trillion yen, or 0.33% of gross domestic product (GDP), the Nomura Research Institute said in a report.