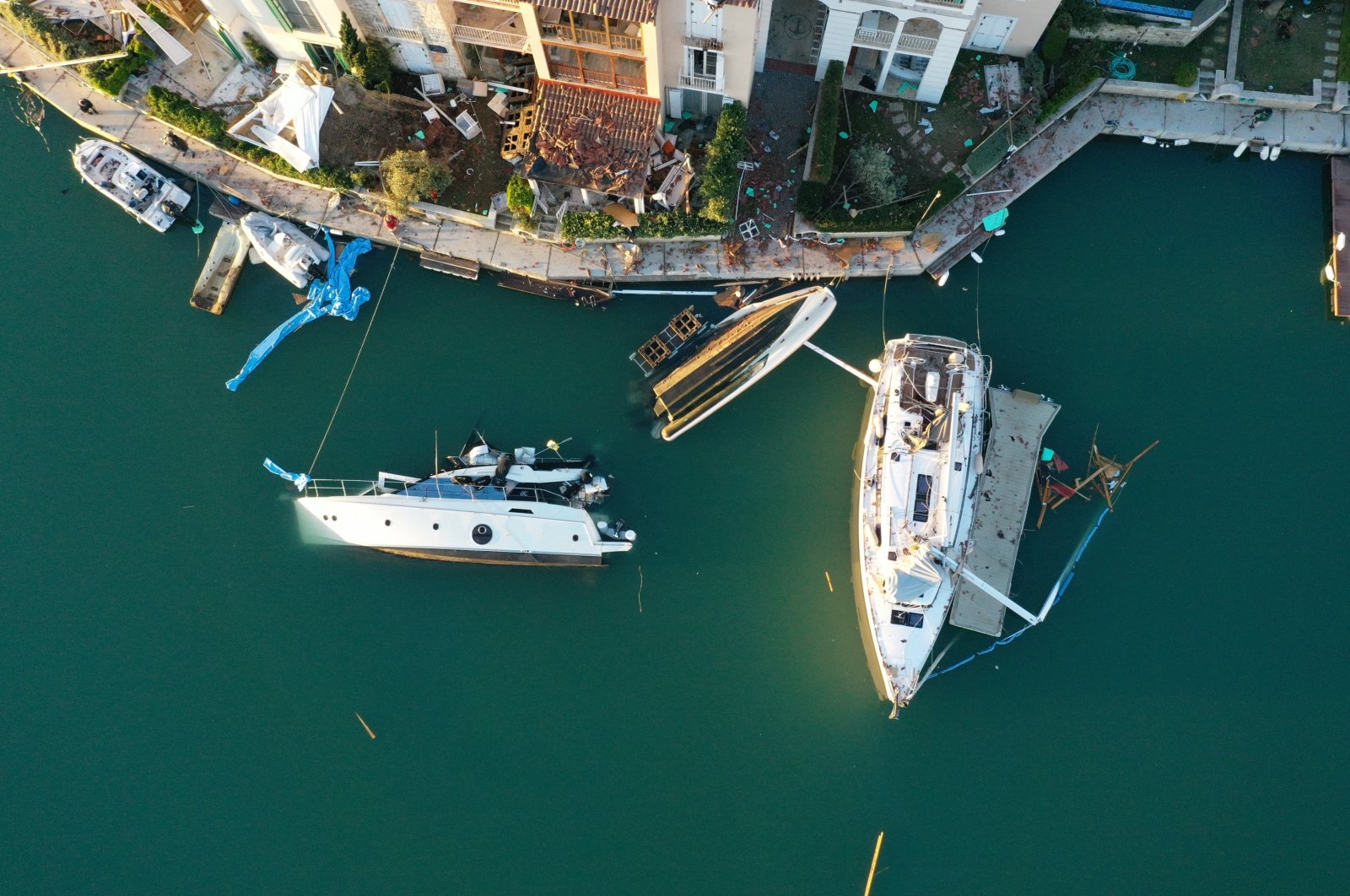 A boat lies almost completely submerged in water after being capsized by a tornado during a severe storm in Çeşme, Izmir province, western Turkey, Feb. 12, 2021. (AA Photo)
by DAILY SABAH Feb 12, 2021 10:13 am

Storms and tornadoes wreaked havoc in towns in the western provinces of Izmir and Balıkesir late Thursday. Eighteen people were injured in Alaçatı, the hardest-hit district in Izmir

Authorities worked quickly to assess the damage on Friday morning caused by severe storms and a tornado that battered Izmir, the country's third-largest city, and a resort town in Balıkesir province.

At least 18 people were injured and dozens of homes sustained significant damage after storms spawned a tornado in the Çeşme district of Izmir late Thursday.

The popular tourist destination first witnessed a heavy downpour around 9 p.m. local time on Thursday but the weather quickly turned violent, with a tornado wreaking havoc across much of Çeşme around midnight. According to Izmir Gov. Yavuz Selim Köşger, at least 16 people were injured. The number was later revised to 18.

“An unprecedented event has occurred in Izmir. This was a very powerful tornado. We have just inspected the coastline. Several cars in the area were flung over the rooftop of houses and were found far as eight to 10 meters (33 feet) away from their parking spots; it’s clear there is significant damage,” Köşger said in the early hours of Friday.

Most of those injured were workers staying in prefabricated housing units at a construction site in Alaçatı. A large crane at the site was toppled by the tornado and fell on the units.

Izmir Metropolitan Municipality Mayor Tunç Soyer voiced similar concern over material damage that occurred throughout the night. “The financial damage caused by the tornado that appeared near Çeşme Alaçatı Port is significant,” Soyer said. Both officials said all emergency teams were made available to help the city. Meanwhile, Agriculture and Forestry Minister Bekir Pakdemirli departed from Ankara to arrive at the scene of the storms, but the minister’s plane could not land in Izmir due to adverse weather and had to return to the capital.

Soyer said it would have been worse if not for the nighttime curfew imposed against coronavirus outbreak. "People were mostly at home. Otherwise, there could be casualties. We have seen tiles from the roofs hurtling toward streets," he told reporters Friday. Soyer said the tornado was brief but very strong. "It is incredible. It lifted cars into the air and hurled them. I think this is nature's way of punishing us as we upset the balance of nature," he said, referring to climate change.

As the day dawned, photos from the resort town revealed the true size of the damage.

Officials seeking to assess the damage of the night witnessed several boats and luxury yachts half-submerged after capsizing during the violent tornado. The heavy downpour during the night also caused a road to collapse elsewhere in the city, while strong winds ripped the roofs of dozens of houses and barns across the province. No casualties have been reported so far, and it is expected to take some time for authorities to tally the true financial cost of the night. It was the second time this month that the Aegean province has been hit by severe weather conditions. Less than two weeks ago, one person was killed in flash floods that occurred in Izmir following torrential rains.

In Çiğli district, torrential rains caused floods and a road collapsed due to heavy rains, while some cars were damaged in floods. The damage was less in Torbalı district where strong winds damaged the roofs of a number of buildings.

In Urla, a hailstorm proved devastating for greenhouse owners. Hailstones the size of walnuts wreaked havoc on greenhouses. "I have never seen such a thing in my life," Kenan Balcılar, a greenhouse owner, told Ihlas News Agency (IHA). "It was like stones were raining down upon us," he added. Balcılar said the hailstorm lasted only about 30 minutes but dealt a blow to his livelihood. "The damage to my greenhouse will cost about TL 70,000 ($9,955). I had just planted vegetables. I need to change the covering of the greenhouse, otherwise, my crops will be ruined," he lamented.

In the Ayvalık district of Balıkesir province, north of Izmir, a severe rainfall was combined with a tornado late Thursday, tearing apart the roofs of residences and uprooting trees. The damage was significant in the Sarımsaklı area. Extreme weather led to power cuts. In Çamlık Cove, 15 boats anchored to the port capsized, while 30 trees were torn apart by the tornado in the Paşalimanı area. No casualties were reported while municipality crews, joined by crews from the Disaster and Emergency Management Authority (AFAD) rushed to help the affected population.

Ayvalık Mayor Mesut Ergin told reporters Friday that they were "spared" from a bigger disaster. "Roofs flew off and pieces damaged houses, shops and cars on the streets," he said. Mahmut Aydın, a local, said the tornado tore apart the roof of a house opposite his apartment building and the roof struck on their building. "We had no power until 4 in the morning," he told Anadolu Agency (AA) on Friday. Çiçek Zekai, another local, said they were celebrating her daughter's birthday at home when the tornado hit. "We saw a pine tree in the courtyard fall down. The window of our living room was shattered. We later saw the walls of the courtyard collapsed. We were shocked. It took only about three minutes," she said.