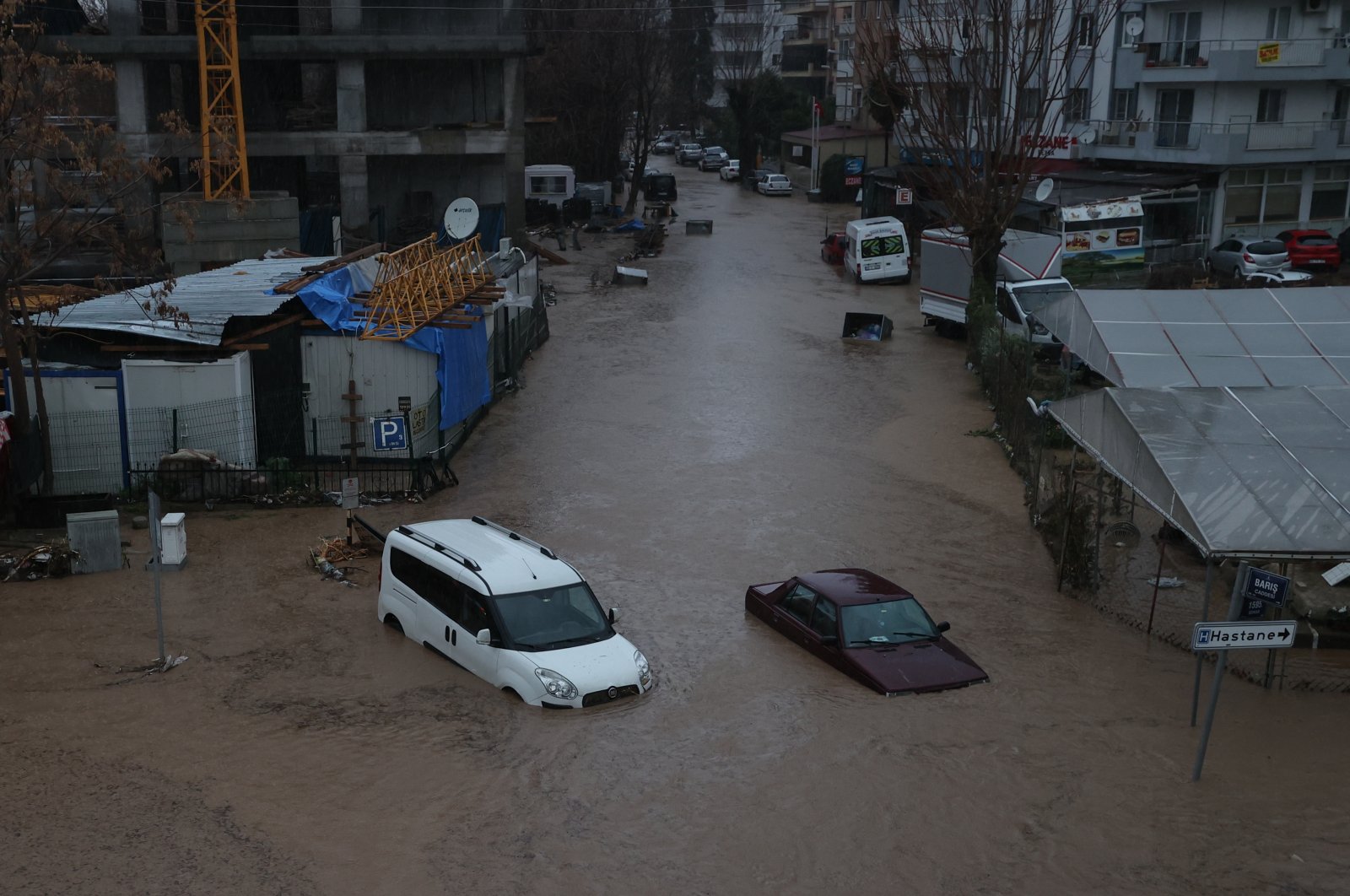 Heavy rainfall, which started late Monday wreaked havoc on Izmir, the country's third-largest province where roads were inundated and authorities urged people to stay indoors on Tuesday. One person was killed in the floods

Torrential rains caused flash floods Tuesday morning in Izmir, blocking main arteries in the downtown area and surrounding districts of Aliağa, Foça and Dikili. Calling the situation a disaster, the municipality urged residents not to leave their homes unless necessary. Media outlets, quoting the governor's office, said one person was killed in the floods in the province's Menderes district. Teams with Izmir Metropolitan Municipality are working around the clock to drain excess water.

Some streams in the Balçova district overflowed, and many residences and businesses in Karabağlar and Bayraklı were especially hit hard by the floods. Vehicles got stuck in the muddy waters, causing traffic jams in the early morning rush hours. The Turkish State Meteorological Service (TSMS) had previously warned of heavy rainfall for the province, which had started during the night and gradually increased its effectiveness. More severe rainfall was predicted for Tuesday, both for Izmir and nearby Aydın province.

"I have been living here for 30 years and have never seen such a disaster," Mehmet Akyol, a resident of Çetin Emeç neighborhood in Balçova district where a stream was clogged with debris and cars drifted by floodwaters piled up on each other, told Anadolu Agency (AA). Indeed, authorities announced that the rainfall, equivalent to what is normally seen over the entire month of February, battered the province in just eight hours. Municipality crews struggled to drain waters while Mayor Tunç Soyer called on motorists not to hit the roads for a while amid the flood danger. Soyer tweeted that streams overflowing their banks due to the rainfall caused disruptions to tram and bus services in some parts of the province. IZBAN, the province's main commuter rail system, temporarily suspended its service on one line. Soyer said extraordinary rainfall almost evolved into a disaster. Though floods are common during heavy rainfall in the province, it was unusual this time. Mayor Soyer later said in a written statement that the province had "18% of rainfall normally seen throughout the entire year." "126 kilograms of rainfall hit per square meter. This is a serious figure," he said. It was almost equal to the amount of rainfall that caused another flood disaster in the province in November 1995 when 61 people were killed. Izmir was also hit by floods in December though their density was lower.

In Karabağlar district, a reinforcement wall adjacent to Poligon Stream collapsed due to an excessive amount of water. People residing in basement floors evacuated their houses. Growing puddles of water on İnönü street in the same district slowed down the traffic. An underpass located right across Izmir municipality building was entirely flooded while drivers stranded there had to evacuate. Kordon, the province's famous promenade along the Aegean Coast, was also partially inundated. Several streets were closed to traffic. Some passengers took shelter on elevated bus stops to flee roaring floodwaters. Floods turned waters in parts of the Aegean Sea into brown as the debris and mud flowed into the sea. Disaster and Emergency Management Authority (AFAD) and Turkish Red Crescent (Kızılay) crews were deployed to flooded areas to help evacuation and deliver aid to citizens affected by floods.

A tranquil holiday resort town by the Aegean, Foça was also heavily hit by floodwaters that inundated residences and businesses. Locals frantically tried to evacuate floodwaters when the municipality crews struggled to respond to multiple flooding emergencies across the town which has a population of around 30,000 people. A hailstorm also battered down the town where streams were overflowed its banks. Foça Mayor Fatih Gürbüz told reporters that the town has never seen "any rainfall like that in 30 years." He said it was only after rising seawater that the floods lost their intensity of flow. The town received reinforcements from rescue crews dispatched from the central province.

Northwestern provinces in Trakya (Thrace) region bordering with Bulgaria and Greece also suffered from heavy rainfall and floods late Monday and early Tuesday. In Kırklareli province, a neighborhood in the Babaeski district was inundated when streams raged through the place after torrential rains. Residences and businesses were flooded and cars were submerged in water. Some locals stranded in their houses were evacuated with the help of bulldozers and were accommodated at schools and hotels. It only took less than one hour for the neighborhood to be inundated. Local authorities said the majority of citizens stranded were evacuated while others managed to reach the dry ground on their own. Turkish Red Crescent delivered food to evacuated citizens. Local municipality's search and rescue crews also rescued stray animals from the floods.

In Tekirdağ province, torrential rains were accompanied by strong winds. Crews strived to drain waters from overflown streams. A bridge connecting a Tekirdağ village to neighboring Edirne collapsed due to floods. In Edirne, authorities issued a public alert as water levels reached dangerous levels in the Ergene and Tunca rivers. The Ergene had already overflown its banks several times last week due to rainfall and inundated agricultural lands next to its banks. Tunca has seen a surge in water levels due to heavy rains in neighboring Bulgaria where its source is located in a basin there. Tunca suffered from floods two weeks ago as well, inundating agricultural lands and leading to the closure of some roads to the province's villages.