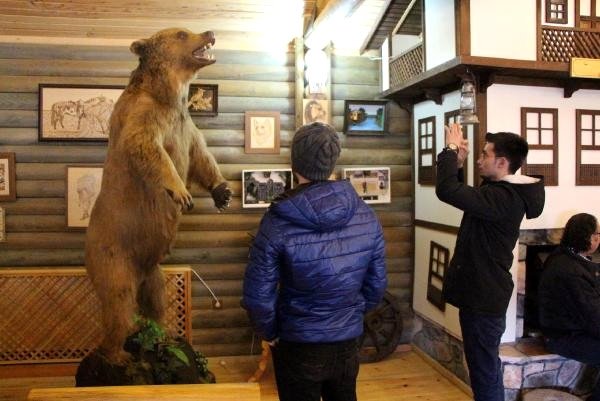 Bolu Mayor Tanju Özcan has once again stirred up controversy in this northern province. The mayor’s plans to erect a 10-meter-high (33-feet-high) statue of a brown bear have encountered both support and opposition from locals in a country where the word “bear” is often synonymous with insult.

Özcan defended his decision, saying Bolu is a natural habitat of brown bears. “You see that most bears in zoos across Turkey have Bolu as their homeland,” he told reporters Tuesday.

Brown bears are commonly seen in eastern parts of the Black Sea region, east of Bolu, though the mayor claims the Aladağlar mountains are home to brown bears. Bears in the province had hit the headlines in recent years due to attacks on humans in rural areas.

The mayor criticized opposition to his idea. “People think it is insulting, but it is not. Bears are symbols for other cities like Berlin and Moscow. We have to own what we have. It is not something strange. My predecessor erected a sazan (carp) statue. Did he mean to insult the people of Bolu?” he argued, referring to the fish species which is also used as a derogatory term in Turkish. “If we want to be a city of tourism, we should get accustomed to statues and monuments. I want to give people something they can take photos with and something they can associate with Bolu,” he said. He also underlined the municipality would not pay for the statue, and it would be built largely by contributions from a sponsor. Özcan pointed out that other cities were associated with statues, giving an example of central Turkey's Eskişehir, home to a statue of a donkey eating seeds, which was originally erected as a criticism of people casually throwing away sunflower seed shells, littering the environment. Like bears, donkeys have a derogatory meaning, often used for rude people in Turkish.

“I think this statue will be a good thing for Bolu, but they should erect it in the forest, not in the city,” Ahmet Katmer, a local, told Ihlas News Agency (IHA) on Wednesday. Ahmet Demir, another resident, supports the idea. “I have no problem with the bear being a symbol of Bolu. It will be good for tourism,” he said.

Mehmet Kodaloğlu, a local, said people of Bolu would now be remembered as “bears.” Though he opposes the mindset that associates animals with rudeness, he said he does not want to be called a “bear-man.” “This is what people would call us when they find out we are from Bolu. Why don’t you erect a statue of something else? The mayor wants to make Bolu the home of bears,” said Ibrahim Akyürek, who opposes the statue.