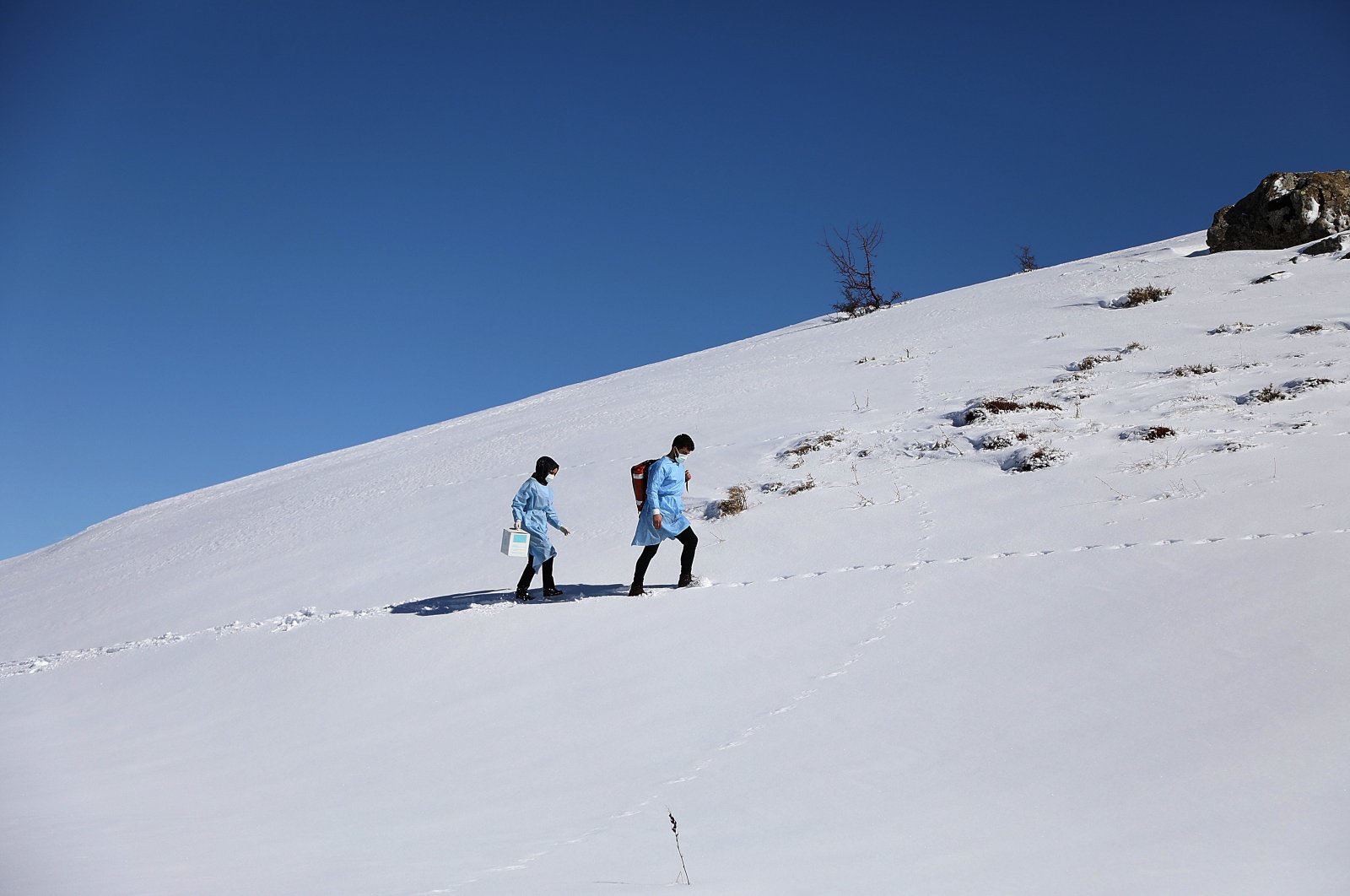 Access to the vaccine is merely an affair of waiting for your turn for city dwellers. For people living in remote, rural locations, health care workers are mobilized for inoculations against the deadly coronavirus amid a harsh winter in Turkey.

Traveling across roads covered with ice and snow, vaccination teams have been going to isolated mountain villages as the government seeks to inoculate 60% of the country's people against coronavirus over the next three months.

After much effort, medical workers arrived Friday to vaccinate older villagers in Gümüşlü, a small settlement of 350 in the central province of Sivas that lies 230 kilometers (142 miles) from the provincial capital.

"It’s a difficult challenge to come here,” said Dr. Rüstem Hasbek, head of the Directorate of Health in Sivas. "The geography is tough, the climate is tough, as you can see.”

Turkey rolled out the Chinese Sinovac vaccine on Jan. 14 and has so far given out more than 8.5 million doses. The vaccine is given in two doses, 28 days apart. Ankara has also ordered 4.5 million doses of the Pfizer-BioNTech vaccine. Health Minister Fahrettin Koca said that Turkey aims to vaccinate 52.5 million people by the end of May. To date, around 10% of Turkey’s 83 million population has received at least the first dose.

"I can’t go to the hospital. I have a heart condition and I get motion sickness in cars,” 70-year-old Gümüşlü resident Zeynep Yiğit told The Associated Press (AP) on Friday. "The doctors came and vaccinated us.”

In Bingöl, an eastern province, mountain villages are the major challenges for vaccination crews. They climb snow-capped mountains as high as 2,500 meters (8,202 feet) to reach some isolated villages. "Sometimes, we walk for hours because some places are impossible to travel by car. But this is not an obstacle for us," Sehergül Tekin, a midwife who works in a vaccination team, says.

Yelesen is one such village. Though on the outskirts of an intimidatingly high mountain, it is still difficult to gain access to the village under bad weather. Tekin, who previously worked in a contact tracing crew that tracks down people who came into contact with COVID-19 patients, is no stranger to the difficulties of the job. Along with her crew, six others are in the field in Bingöl and in two months, they vaccinated more than 16,000 people.

Travel is the main challenge for crews as snowfall closes down roads most of the time. "What relieves us is seeing people smiling and thanking us after we deliver them the vaccine," she told Anadolu Agency (AA) on Sunday. Tekin also notes a higher trust in health care workers for vaccination, since the start of the pandemic. "While I was working in contact tracing, I could see the fear of people in their eyes but health care services built trust. People trust in vaccines now and want it," she says.

Though they use vehicles designed for travel in wintry conditions, it is impossible to overcome the depth of snow in some places. "The only access sometimes is snow tunnels up to six-meters high," she says.

Yelesen's 87-year-old Ali Alpkıray is beaming as he sees a crew walking to his doorstep for his second dose of his vaccine. "May Allah bless them. They made us happy with their visit. I had my first shot and feel fine and hope the second one will make it better for me," he says.

Lütfiye Alpkıray, a 73-year-old local, showers praise on the vaccination crew in the local Zaza language and utters prayers as they prepare to vaccinate the elderly woman.

In Van, a province east of Bingöl, similar challenges await vaccination teams. Sometimes walking through knee-deep snow, they reach senior citizens in their homes. Dr. Hasret Çakıl, who visits a village with her team in Saray, a district on the border with Iran, says the process is "tiring and strenuous" but feedback from citizens motivates them. "You have to travel for six hours sometimes to reach one citizen. But seeing appreciation from them for what we do made us forget what made us tired. These people need us. They can't even leave their home because of snow sometimes," she says.

Another crew heads to a small settlement in Erciş district, after a challenging journey through a snow-covered road. There, 72-year-old Hanım Kelen welcomes them with a bunch of flowers as she prepares to get her shot. "I think we are the luckiest nation in the world," her son Halis Kelen says. "Doctors come to our doorstep, to give us free vaccines. We are grateful to doctors and nurses visiting us despite the snow," he says.

Vaccination is key for a return to days before the pandemic. President Recep Tayyip Erdoğan is expected to announce the easing of coronavirus restrictions on Monday. He previously said the government would evaluate the situation on a province-by-province basis before allowing restaurants, cafes and other shuttered businesses to reopen. Weekend and evening curfews could also be relaxed.