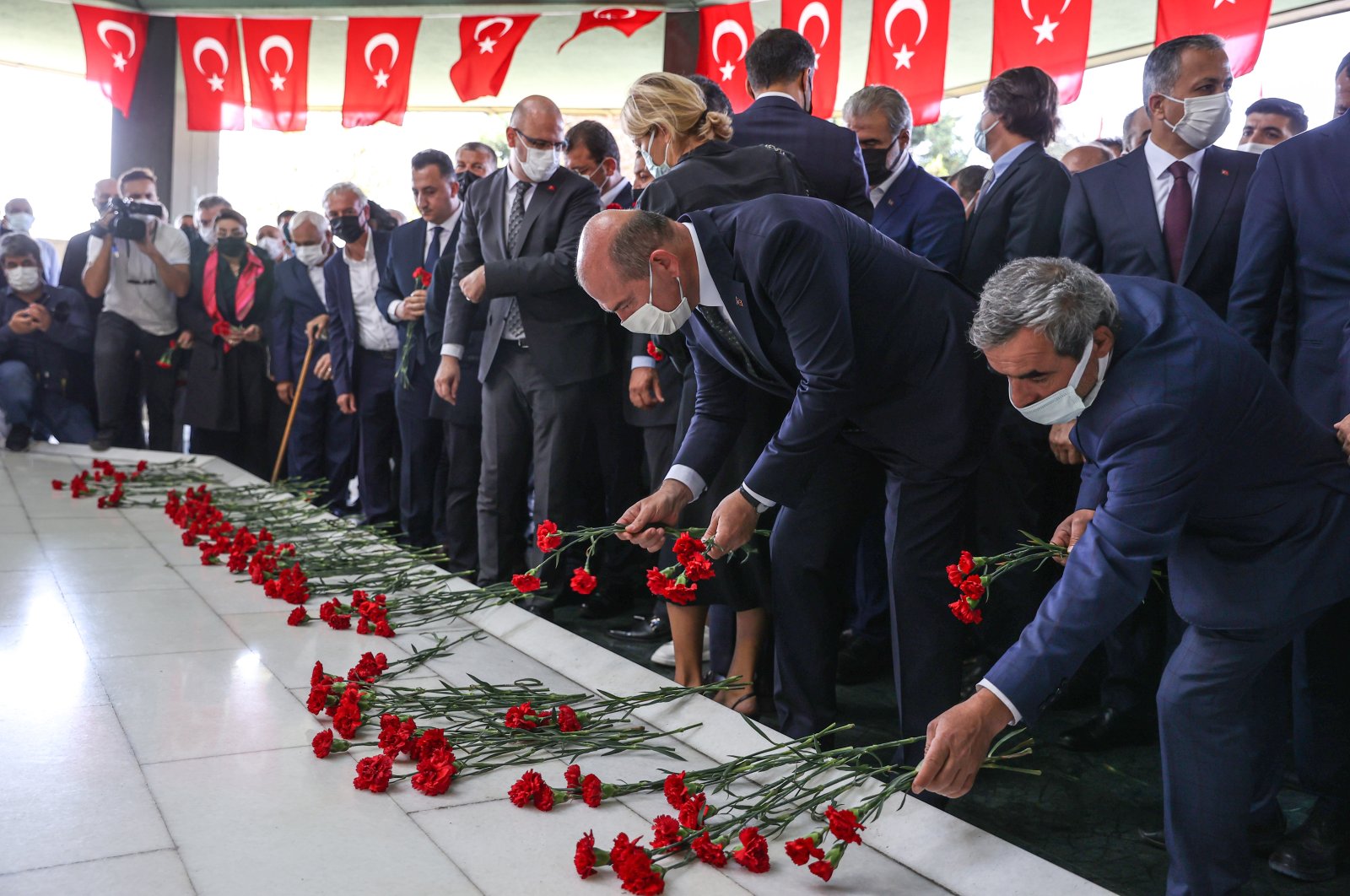 Turkey on Friday marked the 60th anniversary of three executions that remain a dark chapter in the country’s history of democracy. First democratically elected Prime Minister Adnan Menderes and his two ministers, Fatin Rüştü Zorlu and Hasan Polatkan, were the victims of putschists who seized power on May 27, 1960. Over two days in September 1961, all three were hanged in the Imralı island in the Marmara Sea.

A commemoration ceremony was held for the three names by their graves in Istanbul, with the participation of dignitaries, including Interior Minister Süleyman Soylu and descendants of the trio.

The coup was the first in the brief history of the Republic of Turkey but not the last. The Menderes government, which won the landmark 1950 elections, could govern for only a decade before the military seized power. The coup derailed the democratic progress in the country that elected Menderes as prime minister in the first genuine multiparty elections. The governments that followed it after the putschists allowed the elections lived under the shadow of military tutelage and threat of coups for a long time. It weakened the political system and in 1980, the democracy would take another blow when putschists toppled the government again.

The three men are also the only politicians to be sentenced to death by putschists who either imprisoned politicians or forced them to resign in the subsequent coups.

Menderes, a wealthy landowner hailing from a rural part of western Turkey with a law degree, launched his political career in the Republican People’s Party (CHP) in the 1930s. He split from the CHP, however, when he had a falling out with Ismet Inönü, successor to the republic’s founder Mustafa Kemal Atatürk and went on to establish the Democrat Party (DP). The DP found tremendous success in post-World War II when Turkey was grappling with economic challenges and Menderes’ campaign under the motto “Enough! It Is Time For Nation to Speak Up” won the hearts of people weary of the single-party system. The politician carved up an image of a “man of people” and boosted his public support with the development programs of his government.

The second half of Menderes’ tenure, however, was marked with political turmoil and accusation of oppression of dissent. This was, at least, the excuse of the National Unity Committee of putschists who seized power. Menderes, Polatkan and Zorlu, imprisoned by putschists, spent months following the coup by trying to defend themselves against a long list of accusations, from treason to embezzlement, before the putschists’ court, set up in Yassıada island, ruled for death sentences. One day after the verdict, Zorlu and Polatkan were taken to Imralı island and hanged while Menderes was hanged separately one day after them. “I wish endless bliss for my state and nation in this moment of bidding farewell to life,” Menderes famously said as his last words.

Today, three coup victims are remembered as “democracy martyrs” while the current government converted Yassıada where they were tried to “Democracy and Freedom Island.”

Speaking at the commemoration ceremony, Soylu said memories of the 1960 coup shaped his childhood and political life and the coup taught him and the nation how democracy was “put in shackles” on that day. “But still, I don’t understand the cause of the underlying hatred that ordered Menderes, Zorlu and Polatkan to the gallows. We know all about the thirst of power of people behind the coup but I still don’t know the cause of hatred. I don’t know the cause of the hatred that rushed to hang an already sick man (Menderes),” he said.

The minister said incumbent President Recep Tayyip Erdoğan and the government faced the same plot Menderes and his colleagues faced today. “Just like people lying here in these graves, we are ready to follow the same path without thinking about our end, against those wagging their fingers every day,” he said, denouncing a campaign of slander against the government, similar to a campaign against the Menderes government.