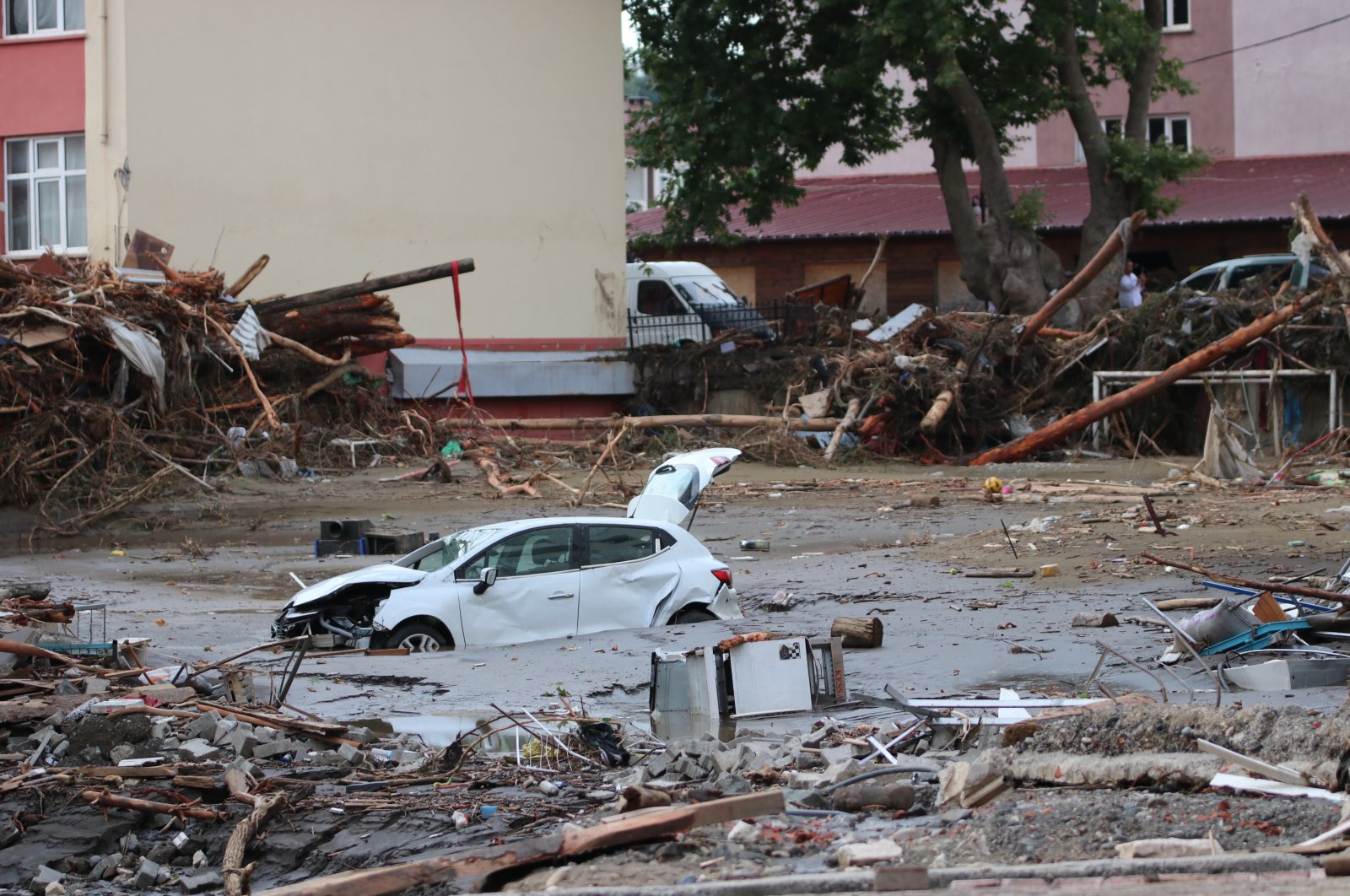 Casualties from mid-week floods in the Black Sea provinces of Kastamonu, Sinop and Bartın have reached 27, while recovery, search and rescue efforts are still underway in towns devastated by torrential rains that destroyed buildings, roads and bridges

The death toll from floods in Black Sea provinces now stands at 27, the Disaster and Emergency Management Authority (AFAD) announced Friday. The highest casualties were in Kastamonu at 25, while two deaths were reported in Sinop. Another person is still missing in Bartın.

Floodwaters carried away people, tore down buildings near streams and wreaked havoc in an area spanning from Bartın in the west of the region to Sinop in the east. Kastamonu was the province hit hardest by the floods triggered by torrential rains mid-week. In Sinop, floods left destruction in their wake in the Ayancık district.

Floodwaters caused streams to crisscross villages and towns and led to the collapse of bridges and roads connecting them. Search and rescue crews have spent the past two days evacuating hundreds of people stranded on rooftops and delivering food to places where access was restricted due to heavily damaged roads. Thousands were relocated to student dormitories. Heavy precipitation that continued sporadically into Thursday challenged search and rescue efforts.

The first floods started late Tuesday, turning streets into running rivers and set off mudslides. Emergency services said the water briefly rose in some areas as high as 4 meters (13 feet) before subsiding and spreading across a region stretching more than 150 miles (240 kilometers). Agriculture and Forestry Minister Bekir Pakdemirli warned Wednesday that the area was facing "a disaster that we had not seen in 50 or 100 years."

Rescue workers rushed to a four-floor apartment building that had partially crumbled and another one next to it that had completely collapsed in the Bozkurt district of Kastamonu. Images showed parts of both river-front buildings toppling into the rushing flood of brown water below. Weather services predicted that rain would continue to lash the affected area for the remainder of the week.

President Recep Tayyip Erdoğan visited flood-hit areas on Friday and addressed the public in the Bozkurt district. The president pledged assistance for the survivors.

Erdoğan said the affected provinces were declared “disaster zones,” which means compensation for losses and other assistance to locals will be covered by the state. “Our country is battling disasters like the rest of the world. We are facing every kind of catastrophe. I hope we will overcome them with minimum damage,” he said, referring to a recent spate of wildfires that raged across the country’s south.

“Our nation shares the grief of families of victims in Kastamonu and other provinces. As the state, we have been with you since the disaster broke out and we will remain so. We did everything we can and will continue doing so,” Erdoğan said, noting that more than 4,700 personnel were working in search, rescue and humanitarian efforts in affected places while 19 helicopters and hundreds of vehicles were working to evacuate people and clear the debris left by floodwaters. He hailed the efforts of soldiers and police officers who airlifted the survivors from rooftops. “They saved 95% of people trapped in these provinces,” he said. Presidential Communications Director Fahrettin Altun tweeted that 1,720 people had been evacuated to safe areas in Kastamonu, Bartın and Sinop.

The president said all patients at a public hospital flooded in the Ayancık district of Sinop were safely evacuated and offered accommodation in other hospitals in the region. He added that efforts were underway to resume access to places cut off due to damaged roads and collapsed bridges. “Work is also underway to resume power in places with power outages and crews are working to repair infrastructure in places with water shortages,” he said. Erdoğan said that the government will also provide free loans and postpone tax payments for residents of flooded districts. “We cannot bring back the people we lost but our state has the power to recover all the other losses,” he said. The president said they would build new residences within one year for people who lost their houses in the disaster.

Turkish charities and municipalities were already in the region to deliver aid to the displaced. In towns where roads were heavily damaged, people formed human chains to deliver water and other basic needs to residents through primitive bridges set up over roaring streams. Turkish Red Crescent (Kızılay) Chairperson Kerem Kınık said they deployed about 300 people in three provinces affected by floods and were delivering meals every day to thousands in Bartın, Sinop and Kastamonu. He said floods had damaged the water grid in the region and the charity was also distributing clean water to locals. "We also dispatched psychiatry experts to help the survivors cope with the trauma of this disaster," Kınık said.

On Friday, relatives and friends of people who went missing in collapsed buildings anxiously awaited on dry ground as search and rescue crews scoured possible spots where the missing might have been carried by the roaring floodwaters.

Ümmü Gülsüm Bulut was among them. She managed to pluck her two children from the water that invaded her home, but her 5-year-old son Kudret Emre slipped from her hands. The Bulut family moved to Bozkurt district some 20 days ago when Ümmü Gülsüm Bulut's husband Özgür Bulut, a police officer, was reassigned there. "Glass shattered and everything started falling apart outside. I saw trees and cars drifting. Then, furniture in our home toppled. I grabbed Emre, but the refrigerator toppled and hit me. I lost my grip and he slipped, I could not save him," Bulut told Ihlas News Agency (IHA) in tears. Her mother Zekiye, who clutched to Emre's younger brother, said the family was living on the fourth floor of an apartment building, but the floodwaters had reached as high as their home.

Münevver Gencek, the sister-in-law of Şengül Kuş, waited for her outside an apartment building after the water overflowing the banks of Ezine stream in Bozkurt almost ate away the lower floors of a multistory building, toppling it to one side. Speaking outside the building whose wrecked facade was dangling toward the stream, Gencek said Kuş, her 20-years-old daughter Senanur and her two cousins, both 7, were in their third-floor apartment when the floods erupted. "The last I heard from them was when Senanur typed to a WhatsApp group of relatives and family members. She wrote: 'It is pretty bad here, pray for us.' This was two days ago," she said Friday.