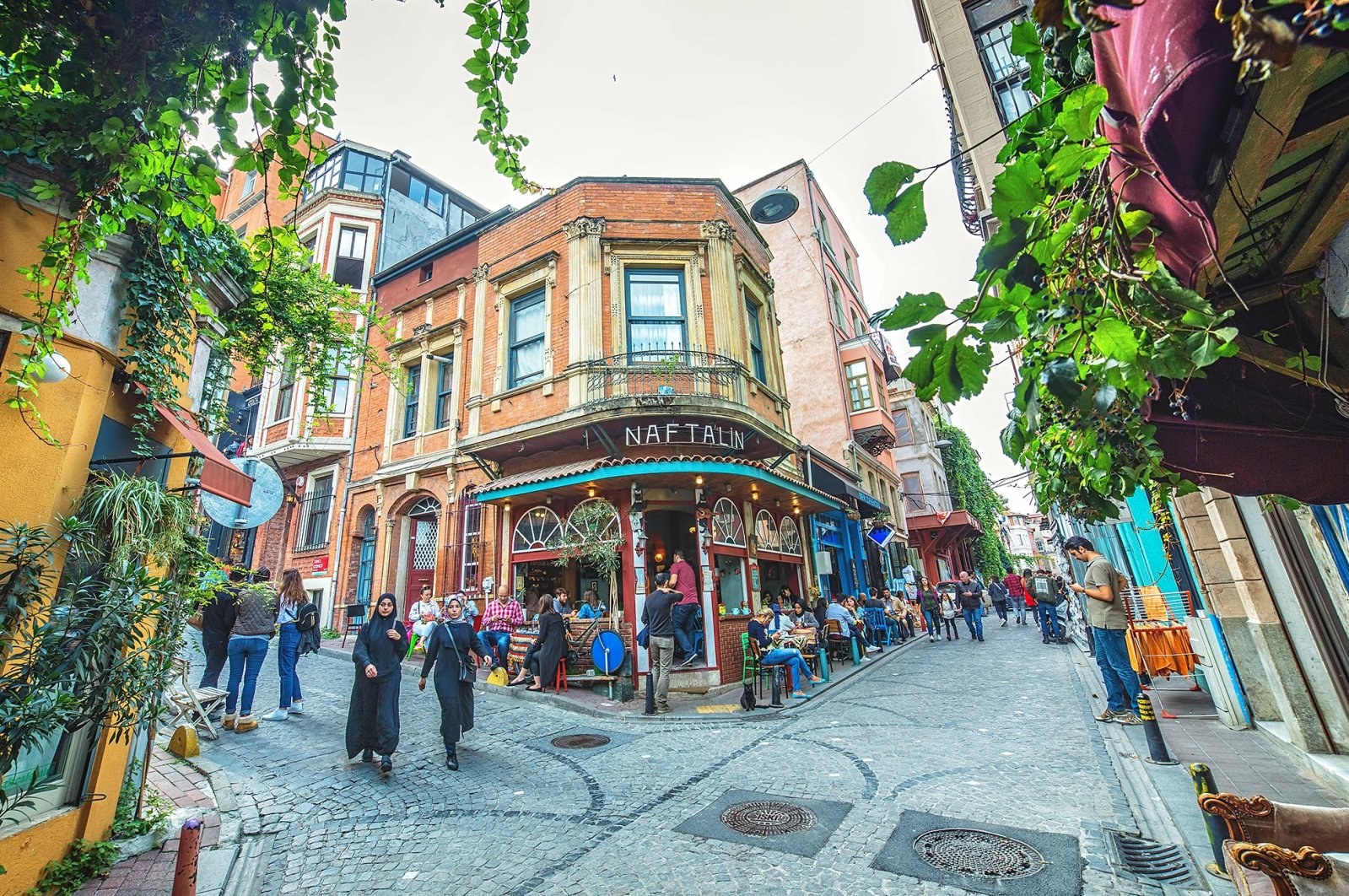 People mill about in the colorful streets and cafes of the Balat neighborhood in Istanbul, Turkey, Oct. 20, 2018. (Shutterstock Photo)
by Leyla Yvonne Ergil Jun 22, 2021 9:48 am

Are you vegan and really want to try every pearl of the local cuisine? Check out these delicious restaurants

Whether you are vegan yet or not, it is always good practice to consume less meat, whether it be for the environment, your perspective or health. Luckily, there is a wide range of vegan varieties of Turkish comfort classics available in cafes and for delivery.

While the world is seeing an escalating trend of people choosing to completely adopt or at least incorporate a vegan diet, in Turkey, there is an exciting new wave of completely plant-based products that are Turkish classics that taste almost like the real thing. From döner to köfte, tantuni to lahmacun and even the street food classic kokoreç, check out these new venues on the vegan scene in Turkey to make sure you get your greens while your eyes deceive you.

The following venues are taking Turkish food to a whole new level:

Having recently added a vegan “butchershop” to the roster, Limonita started off as a cafe in Kozyatağı, where it still operates today as a spacious and comfortable venue with outdoor patio seating to enjoy a varied menu of vegan dishes. Their specialty is dishing up vegan versions of classic Turkish meat dishes such as kokoreç, tantuni, lahmacun, midye and içli köfte, but they also serve a number of international items such as hot dogs, burgers and burritos. The offering of vegan renditions of meat dishes made Limonita so popular they opened an express branch in Moda called Limonita En Moda, which also has garden seating. Most recently they made headlines for their Vegan Kasap – in other words, a vegan “butcher” shop – which is located just down the street from the cafe in Moda. Here they sell plant-based sucuk, tantuni, sausage, schnitzel and lots more.

The group of four young professionals behind the venture includes an entrepreneur, a sculptor, a software engineer and a doctor. Together they have made what seemed culinary-impossible, very much possible. Their butcher shop sells their signature plant-based meat products including döner, roast beef, minced meat, pastrami, salami and you name it.

This isn’t just any regular butcher shop because, in addition to mock meat products, there is also a vast selection of charcuterie items including dozens of vegan cheeses, yogurts and even a take on the famous Big Mac sauce.

In addition to purchasing from the shop or choosing in-house dining, their wide range of products is available for order on the Vegan Kasap website. The two cafes also deliver meals via Yemeksepeti in their respective neighborhoods, namely Kadıköy and Kozyatağı.

Veganarsist has been around for three years now with their signature location in Nişantaşı and a branch in Moda. Soon, there will also be a third Veganarsist in Istanbul’s colorful Balat neighborhood.

Perhaps the first purveyors to embark upon transforming traditional Turkish dishes into plant-based variations, you can dine on kokoreç, stuffed muscles and a wide variety of burgers including Turkey’s famous wet burger, which is doused in a tomato sauce. While at this venue you can try vegan Adana and Urfa durums, and there is even a dish that is an ode to Arnavut Çiğeri. The most popular dish at Veganarsist is their içli köfte, which comes in a soy-based “meat” or green lentil variation.

You can order all of these dishes and more from their website, which delivers countrywide in bulk and half-cooked or frozen for preparing at home. While the venues in Nişantaşı and Moda are adorable in their own right with relaxed indoor and outdoor seating, it will be exciting for vegans and foodies in Istanbul to have a new locale in Balat, which is set to open next month on July 12.

Serving as Izmir’s first-ever and most popular vegan venue for the past six years, Yaşam Vegan Kafe will soon be opening up a second branch in Antalya’s Konyaaltı neighborhood next month. Yaşam Vegan Kafe is also famed for its take on plant-based versions of traditional meat classics. From vegan burgers to sucuk, lahmacun and döner – which comes as a dürüm or as a vegan version of the beloved Iskender variation – every recipe is the result of immense efforts by 34-year-old owner Hasan Yaşam, who spent countless hours working out perfect plant-based replicas of comfort food favorites.

The space in Izmir has indoor and outdoor seating in a quaint backyard patio and they deliver to neighborhoods close by via Yemeksepeti.com, where you can also purchase packages of vegan burgers, sucuk and döner to prepare yourself at home. These items and other vegan charcuterie products such as cheese, yogurt and butter are also available from their in-house deli and the Yasam Foods website. They also offer Cheezmir’s vegan cheddar and a smoked cheddar that comes conveniently in slices.

Meanwhile, by teaming up with friends who happen to be a vegan couple, Yaşam Vegan Kafe will be branching out in July to Antalya's Konyaaltı.

Dalia Vegan Mutfak is a recently opened vegan cafe located in close proximity to the Turgutreis Marina. Their menu is available for indoor and outdoor dining on a garden deck or to go. Their selections rotate daily but almost always include their most popular dishes – falafel, burgers and köfte.

The recipes to these meat-free variations on classic comfort foods were conceived by Didem Önder, an Istanbul native who has been connected to Bodrum since her childhood and recently moved there for good to join her family who also lives here. Explaining that she wanted to do good for nature, maybe save a few animals and make people feel good with the food she makes while also creating an enjoyable meeting point that didn’t previously exist.

Dalia Vegan Mutfak also has a wide range of delicious desserts including Didem’s lemon cake and chocolate tart as well as refreshing purple basil lemonade and masala tea. While some items may rotate, everything is prepared fresh and plant-based and they even roast their own Zapatista coffee straight from Mexico, which is considered to be the world’s most organic coffee.

On a worldly note

Moda in Istanbul’s Asian district of Kadıköy is a prime location as it is close to a variety of hip and happening vegan restaurants. In fact, there is even an exclusive restaurant called Yuzu: Taste of Nature that is dedicated solely to Asian specialties like sushi and vegan Bao steamed-bun sandwiches. They also serve pad thai, Japanese gyoza dumplings, vegan teriyaki and a variety of soups and kombucha teas.

Sleek yet relaxed seating indoors and out at their location on a quiet street in Moda, Yuzu may not be new, as they have been around for three years now, but this restaurant warrants reminding as it is always an impressive option for any foodie or visiting vegan.

Just a few streets over is Croisandwich that, as you may guess, is a shop for sandwiches – both sweet and savory – made from croissants. Well, the good news for vegans is that they also offer a vegan croissant and five different sandwich filling options.

Vegan Dükkan is Turkey’s oldest and most well-established vegan shop in Cihangir and it now has its own website.

Similarly, Vegan Bakkal is a shop situated in Kadıköy’s Moda that delivers through their website.

Last, but certainly not least, is Vegan Dünyası. They have a wide variety of vegan products available online, including other up-and-coming brands in the vegan Turkish foods genre such as Veggy and Vappy – to name just a few. They have also recently opened a shop in Kağıthane.

In Antalya, Simply Vegan and in Izmir, Terra Bakkal are both shops with boutiques in person and online.