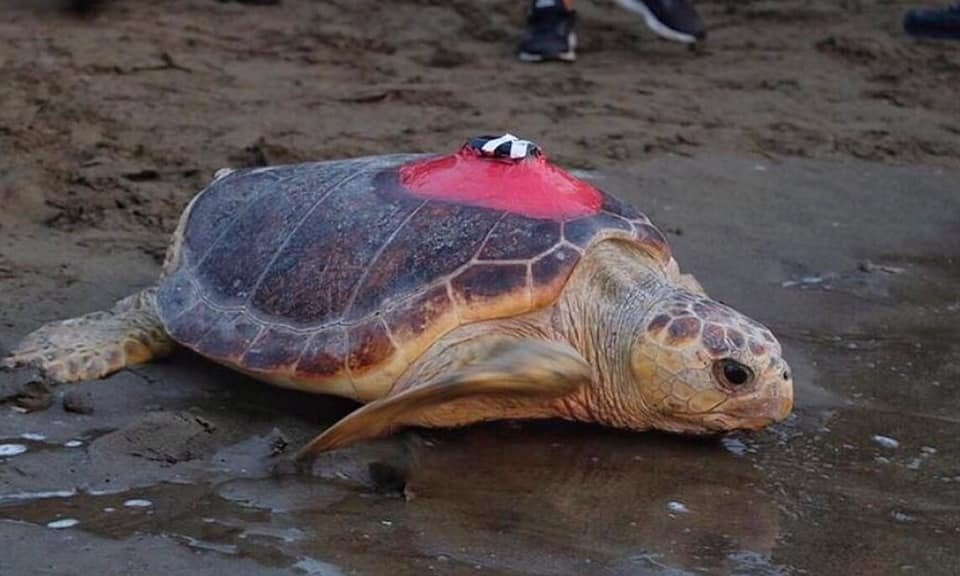 A Caretta caretta, also known as a loggerhead sea turtle, named Tuba, was found on Turkey's Aegean coast in Muğla's Dalyan district two years ago. Tuba's shell was cleaned by the team of a Turkish volunteer organization and she was released into the sea after a satellite tracking device was fitted. After about two years of tracking, the team discovered that Tuba had traveled 10,000 kilometers (around 6,214 miles) from Turkey to the Adriatic. Tuba's world tour is also being watched on a public website.

The Sea Turtle Research and Rescue Rehabilitation Center (DEKAMER) in Dalyan, a district of Muğla in southwestern Turkey, has been conducting sea turtle monitoring for a long time. Tuba, found on Iztuzu Beach in the region, has become the turtle they have watched for the longest time. Tuba's map has been viewed more than 4 million times by people around the world.

DEKAMER scientific coordinator Doğan Sözbilen told Anadolu Agency (AA) that sea turtles are creatures that live for a very long time and spend most of their lives in the sea.

"The life of a Caretta caretta in the sea is very important. We started to monitor the turtles by using satellite tracking technology to obtain this information. Strict protection measures are in place on many beaches and important research is carried out in Turkey," he said.

Sözbilen described Tuba's route as she started her journey from Turkey's Iztuzu Beach and stayed off Marmaris, on the Mediterranean coast, for about two months. Tuba then crossed the Aegean islands and reached Greece, from there she passed to Malta to spend the winter season. Then, with the arrival of summer and the water temperature increasing, she moved to the Adriatic.

"The public reaction for Tuba's journey is amazing. Her travel map currently has over 4 million views. People are really curious about Tuba, as she traveled 10,000 kilometers since we started monitoring her. (The tracker) still sends signals to us since she was released into the sea about two years ago. Tuba is the first turtle to be tracked from Turkey to the Adriatic," he said.

The biggest problem in the satellite monitoring process is the device's battery. No one knows for how long or how far we will be able to follow Tuba's journey.

Sözbilen, his team and all of Tuba's followers are excited about the next phase of Tuba's journey and where she may go. They are hoping that the battery life continues and allows them to follow the rest of her story.

The movements of turtles, which are tracked with a satellite tracking device, can be viewed on DEKAMER's website.