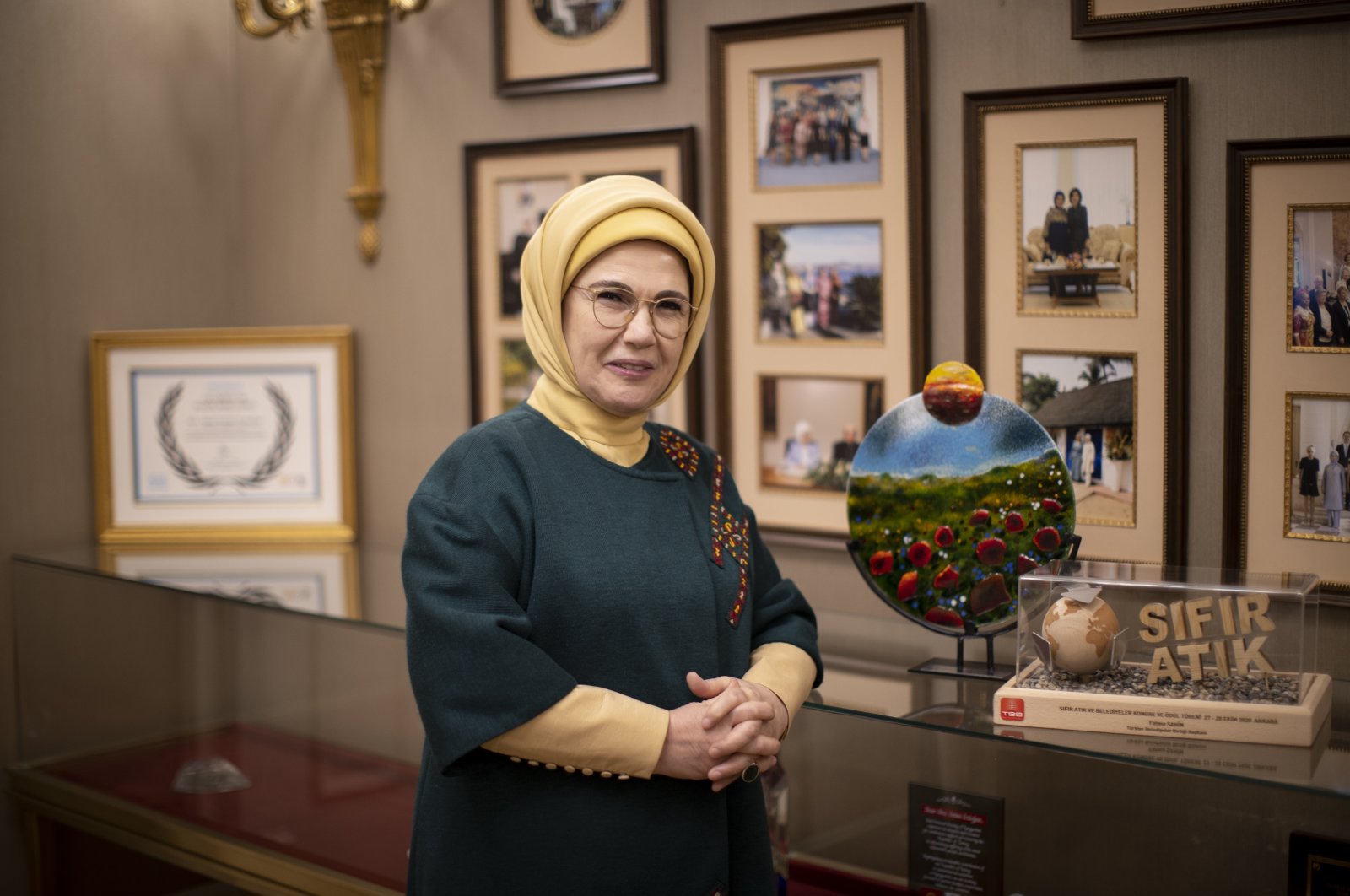 'It is beyond my dreams,' first lady Emine Erdoğan says, as the Zero Waste Project, a comprehensive recycling initiative, takes hold in Turkey

Emine Erdoğan champions a wide array of campaigns and projects, from initiatives encouraging the education of women to volunteering efforts and the preservation of local seeds.

Yet, the first lady’s name is perhaps most synonymous with one special campaign she started in 2017: The Zero Waste Project. As its name implies, the initiative aims to eliminate all waste, especially the kinds that pollute the environment, through recycling and other means. “The Zero Waste Project is now at a stage far beyond what I dreamed. It pleases me very much and is an important gain for our country, to see that it is recognized, embraced by almost everyone in Turkey, by people of all ages,” she says.

The first lady is very proud of the project and says it has been making strides in the international community, explaining that she engages in diplomacy with other first ladies since many countries have shown an interest in also implementing zero waste practices.

Zero Waste seeks to revert industrial pollution and a culture of waste that permeates society, though it has inherited religious teachings and ancestral customs that promote "saving" instead of "dumping." The project is all-encompassing, targeting everything from massive business complexes to one-person households in its bid to minimize waste, particularly discarded plastics and food. Moreover, its ambitions include saving billions for the country, where packages of products have long been confined to limited recycling efforts.

For Emine Erdoğan, the primary goal is to leave behind “a livable world, a clean and developed Turkey” for future generations. She takes pride in turning the Zero Waste Project into a global brand that has been recognized with several international awards.

The first lady says women have a pioneering role in spreading zero waste practices and she has called upon other first ladies to carry out joint efforts to combat climate change, “the most significant issue our world faces.”

The project received awards last year from the United Nations Development Programme (UNDP) and U.N.-Habitat program and was also included in an Organisation for Economic Co-operation and Development (OECD) country report in 2019 as a promising project. More recently, it was honored by the Parliamentary Assembly of the Mediterranean, something the first lady says is important as Turkey is “a significant actor” in the Mediterranean region, “one of the places affected from climate change most.”

“Zero waste is now a concept in the lives of all the people in Turkey and we aim to spread it through the entire country by the year 2023 (the centenary of the Republic of Turkey),” Erdoğan told Anadolu Agency (AA) on Sunday. The Ministry of Environment, Urbanization and Climate Change spearheads the implementation of zero waste practices, along with municipalities that are helping establish proper waste disposal and recycling facilities. The private sector also embraced the project, something made clear by the waste sorting bins found in most places for recycling purposes.

As is the case with most issues, education is key in overcoming the problem. Zero waste recently made its way onto school curriculums, which will teach grade school students the importance of recycling practices and the impact of climate change.

A landmark step in the project was the implementation of a new regulation that required all businesses, from supermarkets to e-commerce, to ask customers to pay for plastic bags. Since its implementation in 2019, Turkey managed to reduce plastic bag use by 75%, Erdoğan says. “So far, the formation of 354,000 tons of plastic waste, stemming from plastic bag use, was prevented. This in turn curbed raw material imports for plastic bag production and hence, helped Turkey to save about $165.4 million (TL 2.44 billion),” she stated, adding that this also meant about 14.6 tons of greenhouse gas emissions from plastic bag production had been prevented.

Plastics might be new but saving is ancient. The first lady says people only need to “remember their roots” so that they can attach importance to reducing the waste. “This has been a part of the lives of our ancestors, past generations. This is something etched in our culture. People used to consume only what they need and avoid excess and prolong the life of things by fixing them instead of dumping them when they broke down or stopped working. Certainly, people live in a world now where consuming more is a global concept. Leading a nature-friendly life and making choices to this extent equals to individual responsibility. We have to stop looking at things as ‘waste,’ ‘garbage.’ Preferring recyclable materials instead of single-use ones will make a great contribution to the future of the world,” she says.

“It is simple. Keep away from the plastics. Use a water flask instead of plastic bottles, for instance. Ideally, we should not create waste. Fighting waste is the hardest part while preventing its creation is easier,” she says.

The first lady seeks to set an example with her work at home. At the Presidential Complex, all facilities, from the office of the president to the kitchen, have adapted to zero waste practices. Mrs. Erdoğan boasts not having “garbage trucks” on the premises. Instead, trucks carry food waste from the kitchen to animal shelters where the food is delivered to cats and dogs. Leblebi, a dog the first lady adopted from a shelter in Istanbul, is among the beneficiaries of the food destined for animal shelters, including a small sanctuary at the Presidential Complex in the capital Ankara.