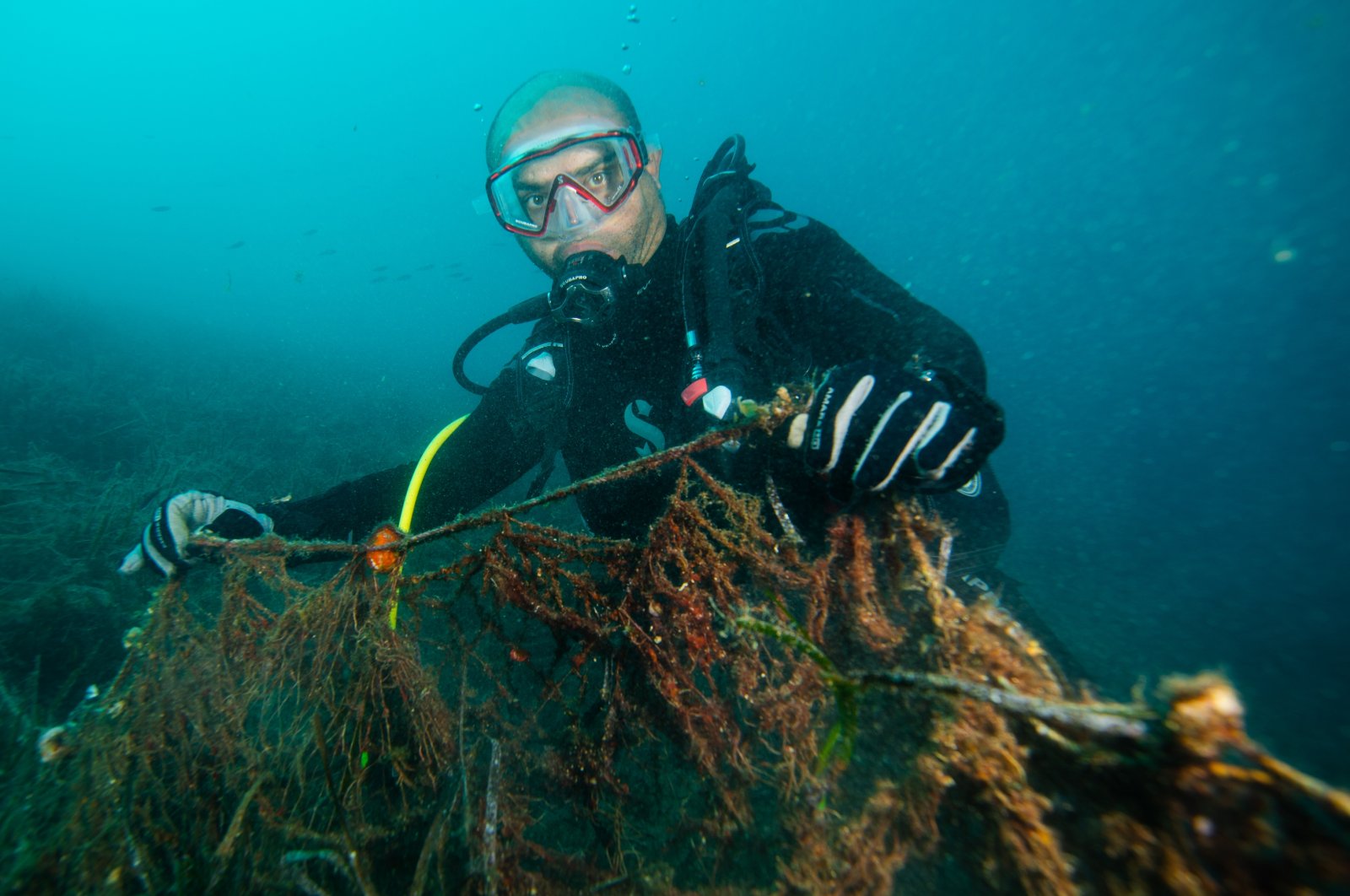 Human-caused pollution of the seas manifests itself in different forms, and ghost nets are just one of the many contaminants harming the marine ecosystem.

As their name implies, ghost nets are nets that have been abandoned at sea after falling into disuse and, without intervention, remain in the ecosystem for years. When left unattended, the nets continue trapping unaware marine creatures and can be swept to different parts of the sea due to changes in currents. Volunteers and public agencies pursuing efforts to clean up those nets are currently the only solution to the problem, which also threatens diving tourism, a lucrative sector in Turkey thanks to its access to the Aegean, Mediterranean and Black seas.

“Their ability to keep trapping any fish after they are abandoned can continue for between four months and seven years,” says professor Adnan Ayaz from the Faculty of Maritime Sciences at Onsekiz Mart University in Çanakkale, a western Turkish province on the Aegean coast. “Fish trapped there are not collected, thus, predators of those fish eat them but in turn, they are trapped too. This becomes a cycle. Ghost nets are like black holes for a marine ecosystem,” Ayaz told Anadolu Agency (AA) on Saturday.

Though the exact figures are not available, it is estimated that 1,500 kilometers (932 miles) of nets are lost or left by fishing boats in total every year. Nets made of plastic derivatives also contribute to plastic pollution at sea. In 2020 alone, authorities removed ghost nets from 10 locations across an area of 10,000 square meters. In 2019, the government mandated that all commercial fishing boat operators must inform the authorities of the type, quantity and coordinates of the nets lost at sea.

Ayaz says ghost nets render the place they are dumped or stuck completely uninhabitable, effectively killing all marine life there. He added that trawling for lobsters and other crustaceans was also a form of “controlled” ghost net hunting and posed risk to marine life. “We need awareness (among fishermen) and a ban in areas under risk for nets. For instance, nets should be banned from rocky underwater areas and fishermen should allow using nets only in designated areas,” he warned.

Hamdullah Aras, a diving instructor, is among the volunteers clearing the seas of ghost nets. Recently, he and friends removed about 200 meters of ghost nets from the Aegean Sea, off the coast of Izmir province in the west. “Though we remove them, fishermen continue spreading nets in areas where nets are most likely to get stuck,” he told AA.