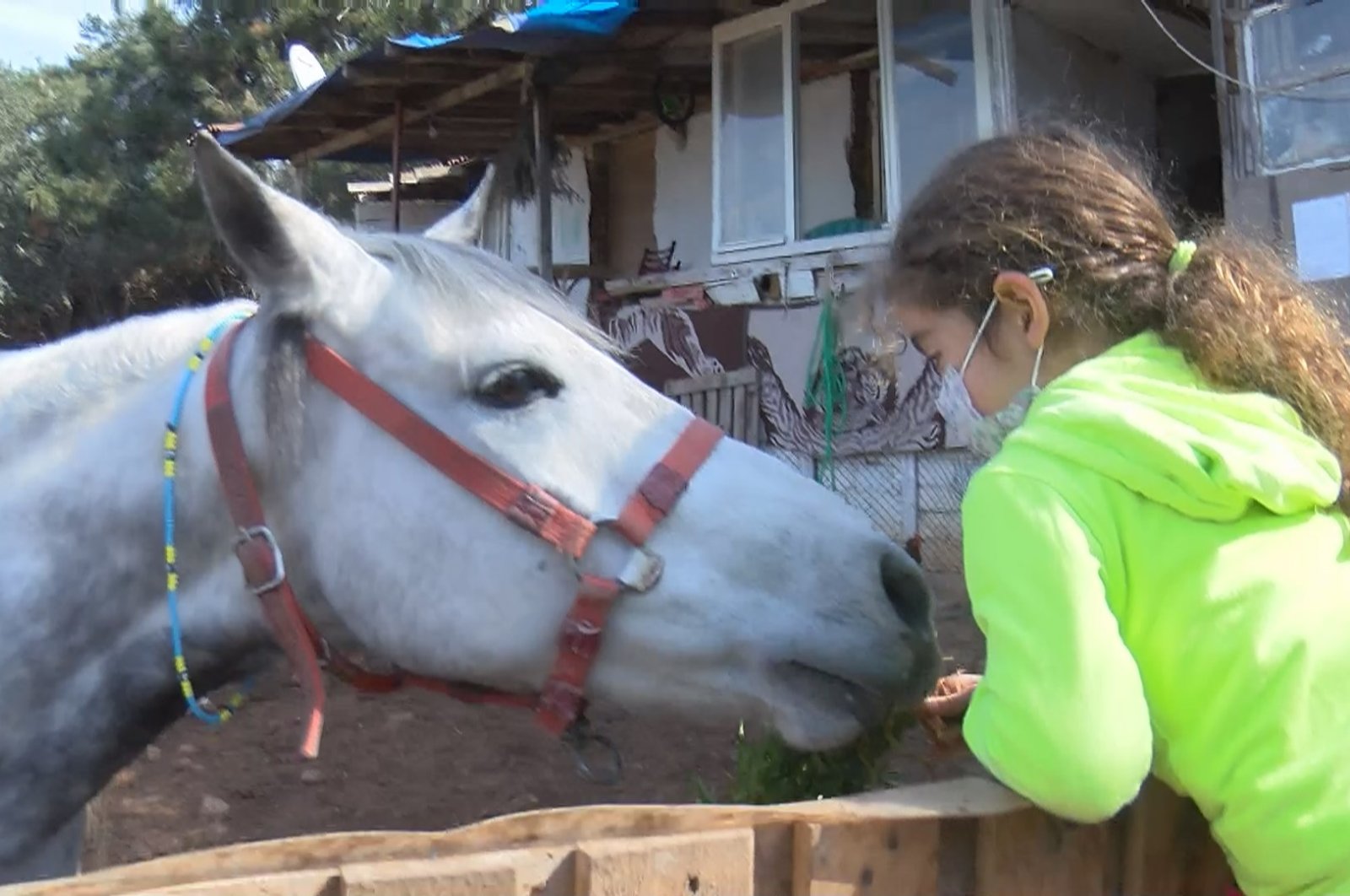 A group of activists staged a protest Saturday, urging the Istanbul Metropolitan Municipality (IBB) to keep stables on two of the city's renowned Princes' Islands intact and keep the remaining horses where they are.

Members of the "Horses of the Islands Platform" gathered at the stables in Burgazada Island upon rumors that the IBB is seeking to demolish the stables along with the ones in neighboring Heybeliada and transfer remaining horses to a larger stable located in Büyükada, the largest of the islands located in the Marmara Sea off the coast of Istanbul.

The islands are closed to motor traffic and have long used horse-drawn carriages for transportation. However, due to a boom in domestic and foreign tourists over the last decades, more horses were brought to the islands to meet the endless demand. These horses were kept in dilapidated conditions at the hands of untrained drivers who forced them to work up to the point of exhaustion. This led to accidents that left passengers and horses injured, with the latter often left to die.

Over the past years, several other Turkish cities and towns banned the use of horse-drawn carriages for transport or touristic purposes. Increasing animal rights activism, public outcry after accidents and a glanders outbreak marked the end of the centurieslong tradition of Prince Islands after the Istanbul Governorate imposed a ban in December 2019. This ban was later made permanent as the IBB pledged to introduce electric vehicles to replace horse-drawn carriages. However, the fate of the remaining horses continued to remain a source of contention.

Sevgi Çekiç, a member of the platform, told reporters that only two horses are remaining on Burgazada and five more on Heybeliada, and they don't want to transfer the remaining horses to the stable on Büyükada operated by the IBB's subsidiary ISPARK. "The transfer of horses to IBB ISPARK stable of Büyükada mark their doom, we saw this last year. IBB bought almost all Heybeliada and Burgazada horses in February and March and brought them to the stable in Büyükada, then demolished their stables. There is no room for horses to move around at the Büyükada IBB stable," Çekiç said in remarks carried by the Anadolu Agency (AA).

"The horses are chained in the stables for over a year now. The IBB stable on Büyükada is like a modern prison. There are no carriages but the horses are not free there, they are imprisoned. Hundreds of horses have died at the Büyükada ISPARK stable over captivity, lack of love or people. At the end of 2019, there were 1,700 horses living in the Adalar district (covering all Princes' Islands). Now, only 100 are living while 845 horses were transferred elsewhere by the IBB, without any inspection or announcement of their whereabouts. This is why we don’t want their transfer. The stables here should not be torn down until new and proper stables are constructed as promised by high-ranking IBB officials,” she added.

Çekiç said that they want the horses to continue living at their home and the island is where they belong. "The horses have the right to live where they are accustomed to and without breaking off with their families," she added.

The press statement read out by Çekiç noted that the IBB is the tenant of the land where the stables are located on both islands, and if the IBB removes the horses, the prime land will be returned to their owners and more construction projects would take their place.

Tolga Demir, who owns a crippled horse, told Demirören News Agency (DHA) that he wants to keep his stable to look after the animal. “If they tear down the stable, I will keep looking after my horse in the woods,” he said.

Zeynep Alpar, another resident, said the rubble from stables that were torn down last year have still not been removed, and they ask the municipality to remove it as soon as possible.