No plan to interrupt education due to COVID-19, Koca says 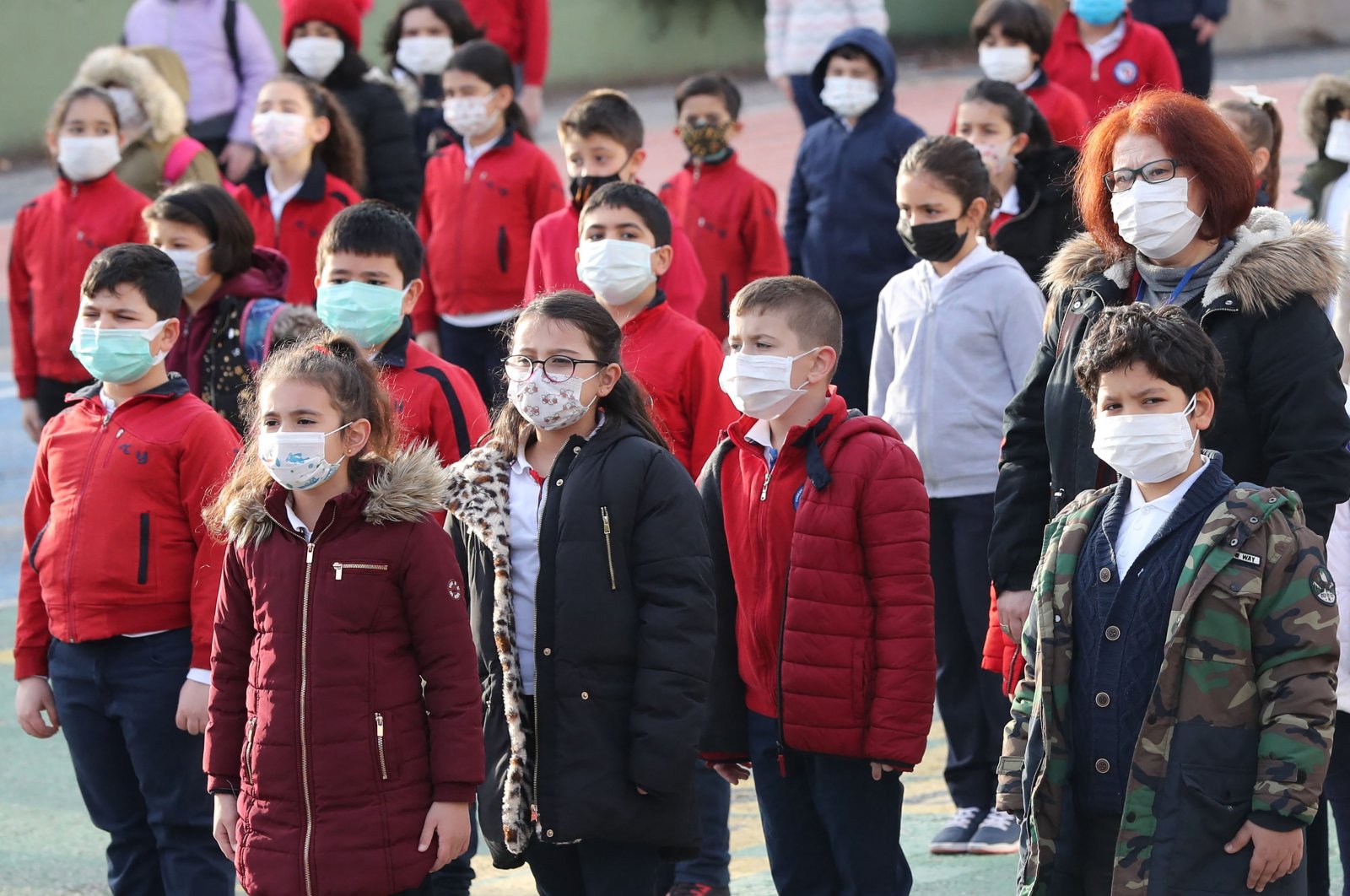 Pupils wearing protective facemasks stand in the courtyard of a school in Ankara on March 2, 2021, after the country lifted restriction measures against the COVID-19 pandemic in regions with lower infection rates. (AFP Photo)
by Daily Sabah Sep 28, 2021 1:37 pm
RECOMMENDED

Health Minister Fahrettin Koca said Tuesday that the government doesn’t plan to impose new restrictions or closures on schools due to COVID-19 cases.

“One-fourth of our average active cases are in the 0-17 age group. Previously it was 10-11 percent. However, this increase is reflected in hospitalizations by 10 percent, but not in the number of intensive care and intubated patients. So there is nothing to be alarmed about. We do not want to put closures and restrictions on the agenda in the new period. As the Science Board and the Health Ministry, we think that all alternatives, including weekend education, should be tried and schools should remain open in every way,” he said.

The health minister added that the vaccination rate of teachers is increasing and those who have at least one dose of vaccine has reached 92%, while 82% of teachers have received two doses.

“The active case among teachers is three percent, the number stands at about 12,000,” Koca noted.

First graders started schools in late August for an orientation program. As part of the preparations for the start of the new academic year, pre-school and first grade students participated in the face-to-face integration training on Sept. 1-3. Over 2.3 million students were given training by 165,450 teachers. As part of COVID-19 measures, a total of approximately TL 650 million ($78.1 million) was sent to around 58,000 schools for masks, disinfectants and cleaning needs, while 113,000 cleaning personnel were assigned.

The Ministry of National Education and the Health Ministry set up a “data integration system” to track the health status of teachers and students. That is intended to facilitate contact tracing if necessary. The education staff were trained on infection control before the start of the new school year.

Koca underlined that the domestic vaccine Turkovac will also be ready in the coming months, adding that all citizens will be offered the right to choose a vaccine.

Turkovac – a domestically produced COVID-19 vaccine – was developed by scientists at Erciyes University in Turkey and started its Phase 3 human trials in June. The inactive vaccine is now at the emergency-use approval phase, and Health Minister Koca announced that its mass production would likely begin in October once it gains approval.

The officials have announced that they were already in talks with other countries to carry out Phase 3 trials of Turkovac. Vice President Fuat Oktay also confirmed that negotiations were continuing with Pakistan, Azerbaijan, Argentina, Colombia and Poland, among others, to bring trials to those countries. “We are working hard to make our locally made vaccine available not only to our nation but for all of humanity,” Oktay said. He noted that international trials would help Turkovac become recognized internationally.

Regarding anti-vaxxers, Koca said Turkish people generally do not have a problem with vaccination, but that "there may have been some who postponed their vaccination."

As with many parts of the globe, anti-vaxxers continue their fearmongering efforts in Turkey too, leading to more infections and death.

Earlier this month, the Istanbul Governorate greenlit a rally that brought together hard-line anti-vaxxers in the city’s Maltepe Square. The rally, the brainchild of a small political party, drew nearly 3,000 people according to organizers, while scientists slammed the event. Anatolian Union Party (ABP) first faced a ban from the Maltepe District Governorate, but the Istanbul Governorate later approved the rally.

Although vaccine hesitancy is believed to be higher in Turkey than outright vaccine opposition, anti-vaxxers found support over social media since the coronavirus pandemic made its foray into Turkey in 2020. They do not categorize themselves as anti-vaxxers and claim they are not opposing the vaccines but rather the “forcing of a commercial liquid” onto the masses, experts say.