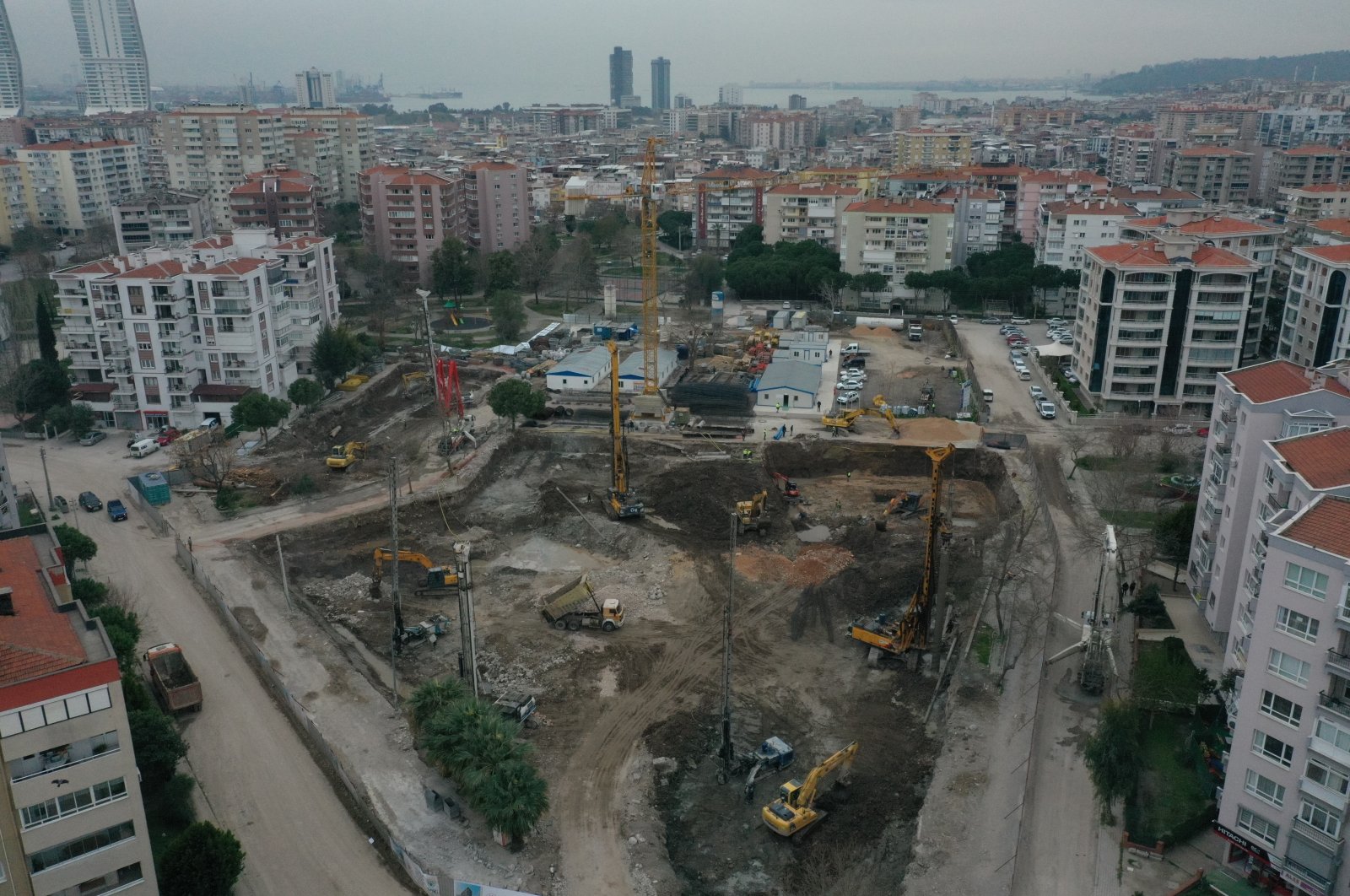 A groundbreaking ceremony on Monday marks the first step for new residences for hundreds of residents of Izmir, the western province that was hit by a deadly earthquake four months ago

The horrible memories will remain but survivors of the Izmir earthquake, which killed 117 people on Oct. 30, 2020, are set to start over their new life in new houses. President Recep Tayyip Erdoğan laid the foundation for 1,844 houses which will be constructed by a housing authority for those who lost homes or had their buildings heavily damaged in the disaster.

An earthquake of a magnitude of 6.6 had flattened buildings and left locals homeless when it struck off the coast of Seferihisar in Turkey's third-largest city. The devastation was the greatest in Bayraklı district, and survivors were settled in prefabricated housing units after a brief stay in tents in the aftermath of the disaster.

The government designated seven areas for the construction of new houses in Bayraklı. The Housing Development Administration of Turkey (TOKI) is in charge of the rebuilding process which will be mostly on the site of collapsed buildings. Experts had blamed unsafe buildings constructed on unstable ground for the damage the earthquake inflicted, and rebuilding work started after the improvement of the ground. Earthquake-resistant new buildings will be reinforced with bored piles which will be as high as the height of new buildings. Along with houses, 208 stores will be built in Bayraklı. All will be in the concept of “horizontal architecture,” something the government tries to spread in the country where tall buildings thriving in big cities raised concerns over earthquake risk. New buildings will have five floors plus a basement floor at most, shorter compared with other buildings in the area which usually have seven or eight floors.

The construction is expected to be completed in August. The government also is building 397 more residences for earthquake survivors in another area not affected by the earthquake.

Minister of Environment and Urban Development Murat Kurum told reporters in Izmir on Sunday that they would also build houses in villages in Karaburun district which was affected by last year’s earthquake. Kurum said the work was also underway for 3,500 more residences in a reserved area, and their foundation will be laid by the end of March. Rebuilding is expected to cost about TL 3 billion.

“We have an area capable of hosting 8,000 residential buildings. We will build more and will speed up the urban transformation process in Izmir,” he said. “Urban transformation” which was launched more than a decade ago by the government, is an ambitious plan to replace old, decrepit buildings with new ones, through tenders and the assistance of TOKI. It primarily aims to address the demolition risk of buildings all across the country in case of a disaster, particularly earthquakes, and to put an end to haphazard zoning plans of the past. Turkey is an earthquake-prone country and Izmir itself has seen a number of medium-range earthquakes and aftershocks after the October 2020 disaster.

The ministry so far detected 50,000 “independent units” at risk in Izmir. Independent units refer to apartment flats or shops in buildings. Overall, some 20,000 buildings were inspected against collapse risk. Some 42,000 “independent units” were demolished. According to the ministry’s figures, TL 407 million ($58 million) was delivered to Izmir between 2002 and 2021 for urban transformation and earthquake assistance projects, from rent aid to earthquake survivors to expropriation of land for new housing developments.

Rıza Bey, an apartment building where 38 people were killed in the earthquake, will be the only place where new buildings will not be constructed. Upon the request of residents who escaped from the earthquake but lost their families, the empty spot where the building once stood, will be turned into “a green space.” Murat Kurum said on Sunday that a memorial to earthquake victims would also be built on the spot.