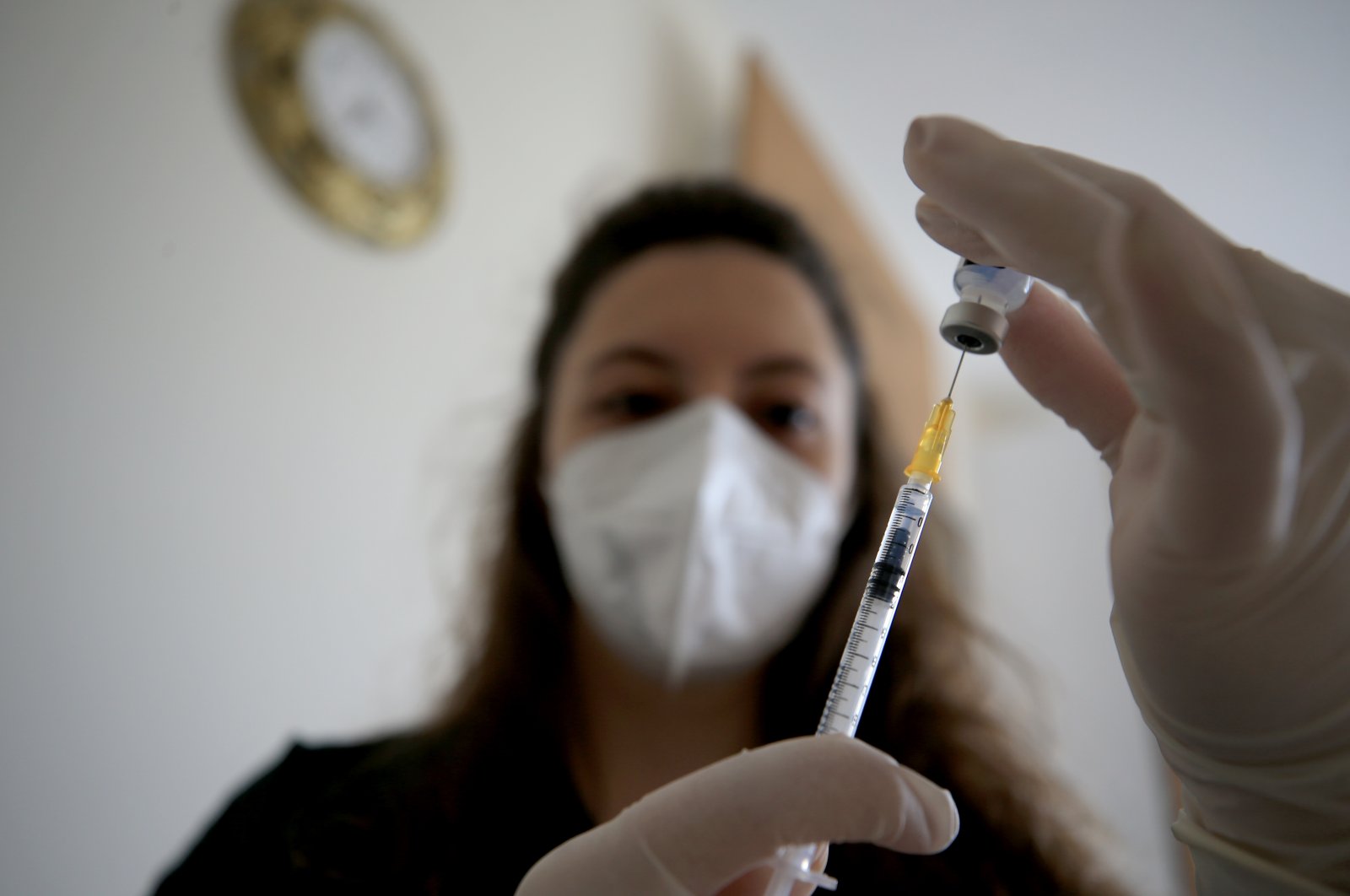 A nurse inserts a syringe into a COVID-19 vial at the Kırklareli Training and Research Hospital in Kırklareli, northwestern Turkey, June 6, 2021. (AA Photo)
by Daily Sabah with Agencies Jun 13, 2021 1:12 pm

Nearly half a million people will receive a jab Sunday as the country intensifies its efforts after striking deals to acquire over 200 million doses. In light of the positive development, the vaccine eligibility age has been further lowered

“Today is the day of vaccination for 448,000 people,” Health Minister Fahrettin Koca said in a tweet on Sunday as Turkey ramps up its vaccination efforts.

Noting the public demand for vaccines, Koca said, "99.485% of those who made an appointment for vaccination came and had their vaccines.”

“We are one step closer to normal life. Thanks,” he added.

Meanwhile, the country has also lowered the vaccine eligibility age to 40.

"If you are 40 or older, you can make an appointment as of this morning. We expect 100% participation," Koca wrote in another tweet.

Turkey has administered over 33.3 million doses of COVID-19 vaccines since it launched a mass vaccination campaign in mid-January, according to the Health Ministry data.

More than 19.69 million people have received their first doses, while over 13.65 million have been fully vaccinated, according to ministry data.

Aside from lowering the general vaccination eligibility age, the country has also recently expanded its vaccination campaign to include more people.

From waiters and waitresses to lawyers, large numbers of people are now eligible for vaccination regardless of their age. The Health Ministry announced the latest groups eligible for vaccines on Thursday and Friday in its bid to achieve mass immunity in the country.

Koca fired off tweets one after another to the joy of millions on Thursday evening, and his announcements of new groups for vaccination continued into Friday. The first group included in the new “age-free” chapter of the inoculation drive were food sector employees, which includes everyone from the staff of restaurants and cafes to people processing and delivering the food to millions every day. They were followed by hairdressers, a now dangerous occupation during the coronavirus pandemic as their environment brings people into close contact for hours. Later, Koca announced lawyers would be able to book vaccine appointments starting on Friday.

On Friday, the vaccination campaign was extended to people in the transportation sector – including people working on city buses, minibusses, intercity buses and taxi drivers – whose vaccinations will start on Saturday. Koca announced on Friday afternoon that people working in delivery services – including motorcycle couriers who deliver everything from food to consumer electronics to millions confined to home during the pandemic – would have their vaccinations starting on Saturday.

The Turkish Exporters’ Assembly (TIM), meanwhile, announced that exporters holding “green passports” for international trips were also included in “priority” groups for vaccination. “This is an important decision to improve Turkey’s export volume,” TIM, an umbrella body for 100,000 exporters exporting to hundreds of countries, hailed. The first job-specific vaccination drive was launched for teachers a few months ago, and this week it included musicians, actors and the staff of film and TV production crews as well as theater companies.

The country launched its vaccination campaign in January 2021 with health care workers. The country's oldest citizens were prioritized in the drive, with the age limit for eligibility gradually dropping with the arrival of new batches of doses.

"Next week we will inoculate volunteers with a Turkish-developed COVID-19 vaccine," Koca said in a live press conference recently.

Koca also noted the studies currently being carried out to determine which vaccines can be mixed and matched if scientific research proves that a third dose is necessary.

Administering over 33 million doses in less than six months is no small feat for a country of more than 83 million people, and Turkey once ranked sixth in the world in coronavirus vaccination. Yet, the drive slowed down a little with delays in the shipment of vaccines. This month, more Pfizer-BioNTech vaccines are set to arrive in the country. Vaccine hesitancy among the public also hurts the process. Authorities seek to promote vaccination among the wider masses and are considering bringing in restrictions for those who do not have their jabs, though inoculation is not mandatory in the country.

“Doses not delivered in six hours cannot be used again and go waste. The vaccines are precious and hard to acquire. Do not skip your appointment,” he warned the public in a tweet.

To prevent any potential loss, hospitals and agencies overseeing the distribution of these shots scramble to ensure that not a single dose is wasted. It involves a meticulous vaccination schedule and sometimes calling people in early for their appointment if someone else fails to show up. The vaccine was previously available only at public and private hospitals due to anticipated problems over storage conditions, but authorities recently announced that it would now be available at small neighborhood clinics as well.

Turkey reported 6,076 new coronavirus cases, including 503 symptomatic patients, over the last 24 hours on Saturday. The number of new cases on Friday was 6,261.

The country's overall case tally is over 5.32 million, while the nationwide death toll has reached 48,668 with 75 new fatalities.

To contain the virus, Turkey currently has a curfew from 10 p.m. to 5 a.m. from Monday to Saturday and a full lockdown on Sundays.

Since December 2019, the pandemic has claimed over 3.79 million lives in 192 countries and regions, with more than 175.6 million cases reported worldwide, according to the U.S.-based Johns Hopkins University.