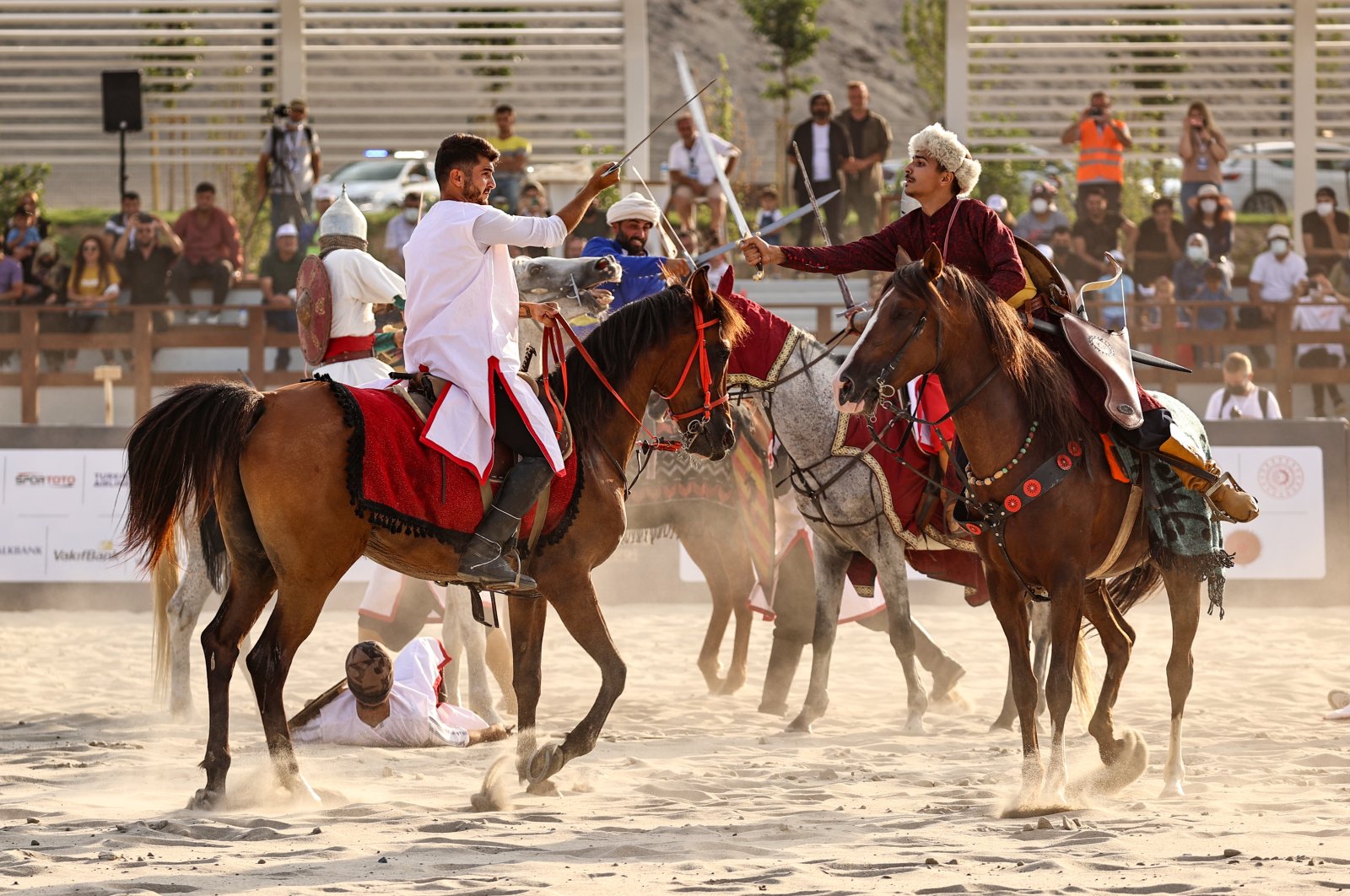 In a month of victories, Turkey celebrates the win against the Byzantine army by Seljuks in the legendary Battle of Manzikert 950 years ago, with events in two provinces where the armies prepared for the battle and fought

Three days of celebrations for the 950th anniversary of the Battle of Manzikert (Malazgirt) kicked off on Tuesday. They culminated in one big ceremony on Wednesday with an event that was attended by President Recep Tayyip Erdoğan and other dignitaries in Bitlis province while a second event was scheduled in the Muş province. Events, which also include remembrance for fallen soldiers of the Seljuk army, are being held in the eastern province of Muş, where the battle took place, in the present-day Malazgirt district and in Bitlis province where the Turkish army camped before the battle in 1071 against Byzantine forces.

The ceremonies are being held under strict measures against the ongoing COVID-19 pandemic, which limited attendance in last year’s events. Social distancing and mandatory mask rules are in place at the event venues. In Malazgirt, a parade was held and other events centered on a national park where a yurt representing the place where Seljuk Sultan Alp Arslan stayed before the battle was erected. An Ottoman (successors to Seljuk rule in Anatolia) military band concert launched the events. The park also hosts more yurts where exhibitions on Seljuk and Turkish history are on display, as well as exhibitions on Turkish culture and handcrafts. During the celebrations, teams will compete in traditional sports in various tournaments of horseback archery, cirit (the ancient Turkish sport of mounted javelin throwing) and horse races.

A similar venue, complete with yurts, was established in Bitlis’ Ahlat district, where a complex dedicated to the youth was inaugurated near the event venue last year.

The exact location of the battlefield is not known; however, a group of researchers is currently working in Malazgirt to find it and recently discovered remnants of weapons from the battle in a vast field.

August is viewed as a “month of victories” in Turkish history and the Battle of Manzikert was the first among them. It changed the fate of Turks in Anatolia, dealt a blow to Byzantine rule and ultimately led to calls for a new Crusade against Muslims.

As Sultan Alp Arslan, one of the most successful rulers of the Seljuks, made territorial gains in present-day Syria and the east of present-day Turkey, the Byzantine army led by Emperor Romanos IV moved to stop him. The Seljuk army was outnumbered by the massive forces. The Byzantine army had 200,000 soldiers, while the Seljuks were only about 40,000 people, according to historians. It was a battle of survival for Alp Arslan and his army and to symbolize that, the sultan was draped in an all-white cloth on the day of the battle according to historic accounts, symbolizing a shroud. "If I become a martyr, bury me with this cloth and hand the throne to my son Melikşah," he famously said in a speech to the army before the battle.

The army relied on their faith and an ingenious tactic by the sultan for victory: the "Crescent tactic," which involves surrounding the enemy in the shape of a crescent as the latter advances, to pursue Seljuk troops pretending to retreat paid off. Seljuks managed to defeat the enemy who retreated after suffering heavy losses and capture the emperor. The emperor was later released but was dethroned upon returning to the Byzantine capital after the defeat. Alp Arslan himself was assassinated one year after the battle. The battle demonstrated that the rule of nomadic Turkic tribes had evolved into small states was here to stay in Anatolia. Some two centuries after the battle, one of those tribes went on to found the Ottoman Empire, which captured the last Byzantine stronghold in 1453 and permanently made Turkey a homeland for Turks.

Addressing the event in Ahlat, President Recep Tayyip Erdoğan said that he remembered the martyrs with gratitude for their sacrifice to keep "these lands our homeland." The president said Ahlat itself has been a bridge between eastern and western civilizations for centuries and was a gathering point for Muslim Turkish nomads heading west from Central Asia.

"This place is of great importance in winning the Battle of (Manzikert) and for being a place where people arriving from Central Asia spread across Anatolia to establish a culture of tolerance," he said. "We remember our ancestors and at the same time we tell the world that we will keep these territories as our lands forever."