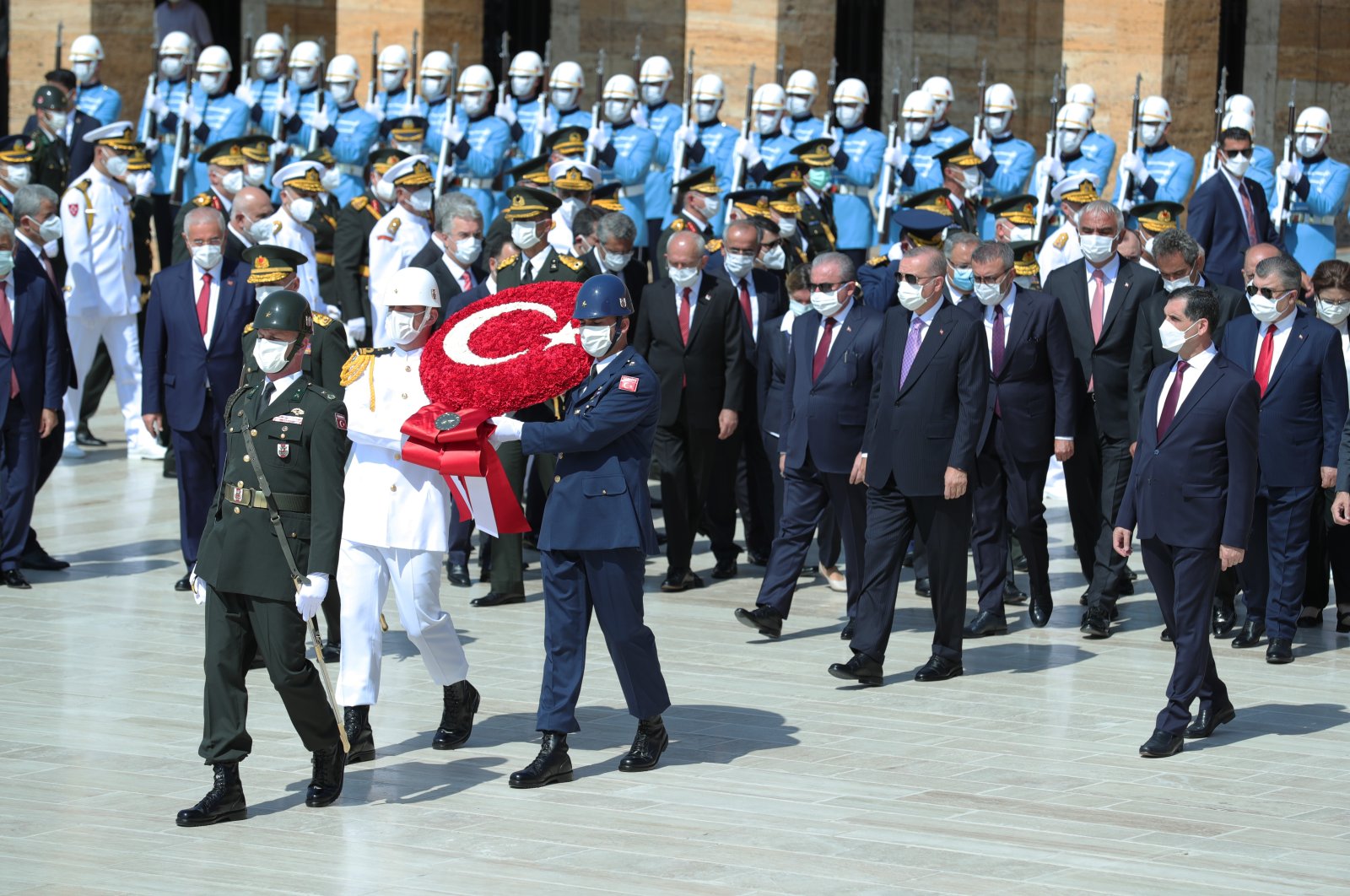 The 99th anniversary of the final chapter in Turkey's campaign for independence was commemorated on Monday across the country on the occasion of Victory Day, bookending a month of glory in Turkish history

Victory Day was celebrated and fallen soldiers were commemorated Monday across Turkey. The day is originally a remembrance of the Battle of Dumlupınar fought by Turkish forces 99 years ago. It falls into the last day of a month known for important milestones and victories in the history of the country, from the Battle of Manzikert (Malazgirt) to the Great Offensive fought against invading Greek forces prior to Dumlupınar.

In 81 provinces, ceremonies were held to mark the day, from parades to visits to the cemeteries of fallen soldiers and wreath-laying ceremonies to honor Mustafa Kemal Atatürk, the founder of modern Turkey.

In the capital Ankara, President Recep Tayyip Erdoğan and other dignitaries, including the Parliamentary Speaker and leaders of opposition parties, started the remembrance by paying their respects to Atatürk at his mausoleum known as Anıtkabir. The president later hosted a reception at the Presidential Complex on the occasion of Victory Day.

“Honorable Atatürk, we are in your presence once again on the 99th anniversary of the great victory, one of the golden bricks on the path to our independence. We remember your excellency and honorable martyrs on this day. We are carrying Turkey to a bright future in line with the goals you set for us,” Erdoğan wrote in a memorial guest book at Anıtkabir. “We are expanding the deterrence capabilities of the Turkish Armed Forces, who have won the hearts of our nation, by steps taken in our defense industry. We are strengthening ties between the Republic and the public with reforms we achieved in democracy, justice, rights and freedoms. The state of the Republic of Turkey you entrusted to us is in good hands. May your soul be blessed,” he added.

The president is set to attend a ground-breaking ceremony later during the day for the “Crescent and Star Project,” a massive complex that will house the Ministry of National Defense, Office of Chief of General Staff and headquarters of the army’s Land, Air and Naval Forces. The building, which will be constructed in the capital Ankara, is likened to the Pentagon in the United States. As its name implies, it will be in the shape of a crescent and star, the main symbols on the Turkish flag.

Erdoğan had earlier issued a written message to mark the anniversary of the Battle of Dumlupınar, which resulted in the resounding triumph of Mustafa Kemal Atatürk's revolutionary army against occupying Greek forces. "We are in the bliss of achieving the 99th anniversary of the Great Victory, one of the cornerstones of our centuries-old glorious history. I mark the honor of the August 30 Victory Day of our nation, Turkish Cypriots and our citizens living in various countries around the world," Erdoğan said. He also commemorated Mustafa Kemal Atatürk, the venerated veteran and commander-in-chief of Turkey's War of Independence, as well as esteemed members of Turkey's Parliament and the heroic soldiers.

He stressed that Aug. 30 is one of the most critical turning points in the country's history and paved the way for the foundation of the Turkish republic. "Despite all kinds of poverty and impossibility, the Turkish people have once again shown that these lands, which were made our home with the Battle of Manzikert in 1071, are our eternal homeland," he said. Turkish control of Anatolia – the vast territory of modern Turkey – began with the Aug. 26, 1071 Battle of Manzikert, which saw the Seljuk Turks led by Sultan Alparslan defeat a much larger Byzantine army. "The spirit, belief and will that inspired the Great Victory are drawing the direction for our nation today, just as it did 99 years ago," Erdoğan added. He said Turkey has become the hope of not only its 84 million citizens living within its borders but also hundreds of millions from the Balkans to Asia, from Africa to Europe. Turkey will continue to defend the rights of the oppressed against the oppressors and to strive for peace, justice and freedom to prevail all over the world, he added.

The Turkic Council also hailed Victory Day, with a statement by its secretary-general Baghdad Amreyev. on Sunday hailed Turkey's Victory Day on the momentous 99th anniversary of the resounding defeat of occupying Greek armies at the hands of Turks in the Battle of Dumlupinar in 1922. The victory constituted the basis of the foundation of Turkey, Amreyev said. "With its growing economy, strong democracy, commitment to fundamental human values and visionary foreign policy, Turkey has continued to be a source of inspiration for other nations in its region and beyond," he added. Amreyev also commemorated Mustafa Kemal Atatürk and all the martyrs and veterans of the Turkish Independence War and wished peace, unity and solidarity to the entire Turkic World.

The Battle of Dumlupınar ended with Turkey’s decisive victory against occupying Greek forces in a campaign that took place between 1919 and 1922. Greek forces had invaded most of western Turkey following the collapse of the Ottoman Empire in the aftermath of World War I. Atatürk (then known as the Ottoman Pasha Mustafa Kemal, hit the road in 1919 to mobilize forces to fight for Turkish independence. In a brief period of time, he managed to organize a movement with the support of the public. After dealing a crushing blow to Greek forces in the Battle of Sakarya in 1921, Mustafa Kemal’s forces launched the Great Offensive one year later to push Greek forces further to the west and, eventually, force them to leave Anatolia. Finally, the Offensive began in the last week of August in 1922. Turkish forces one by one recaptured places invaded by Greek forces, forcing them to start retreating to western cities. On Aug. 30, the two sides confronted each other near the town of Dumlupınar, located in the present-day Kütahya province. The victory ensured the recapture of Kütahya while inflicting heavy losses on the Greek forces. It would take another two weeks before the Turkish army captured the last Greek stronghold in the western province of Izmir and cleared Anatolia of Greek forces.