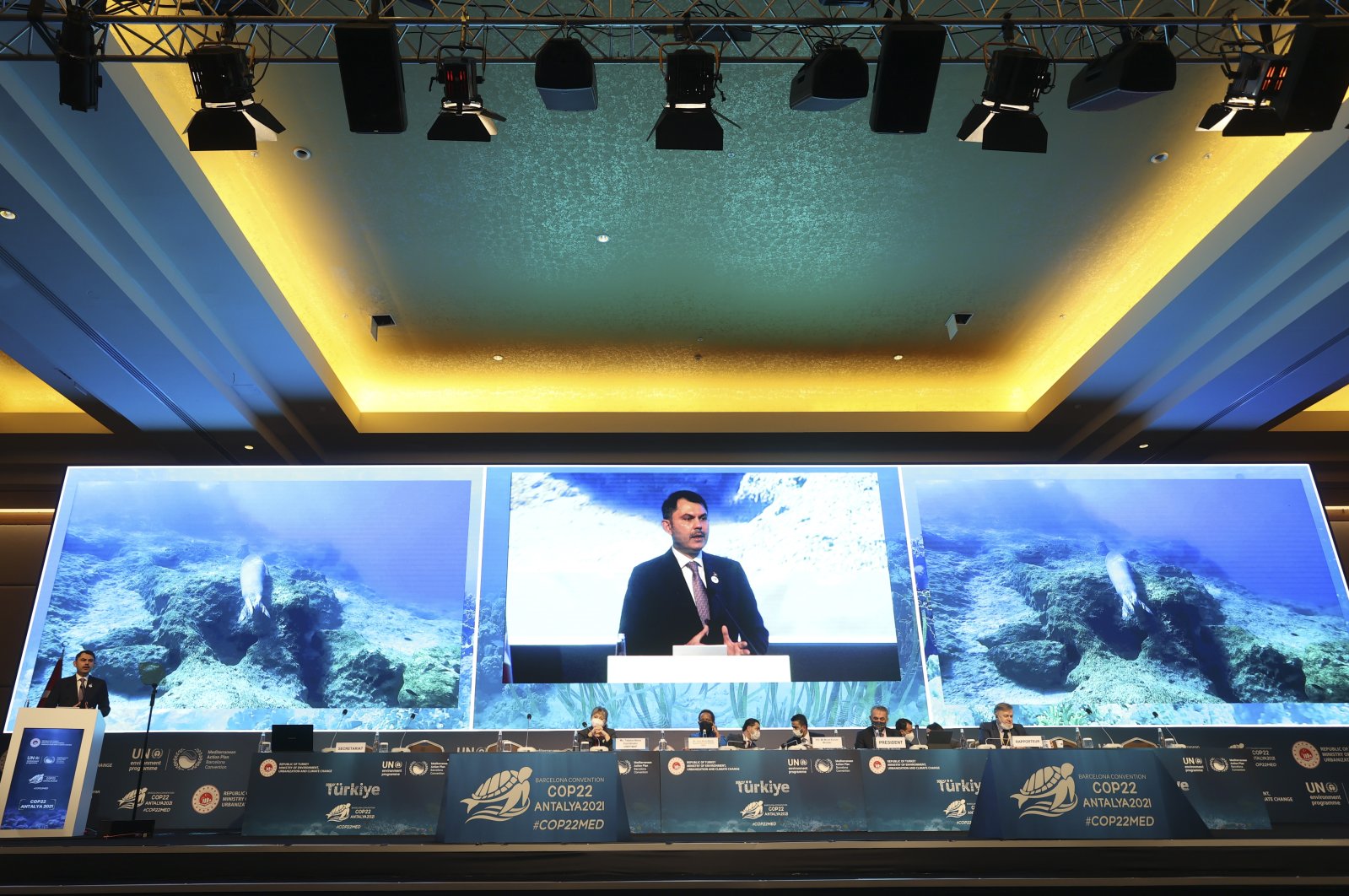 As the host of a climate change summit for the preservation of the Mediterranean, Turkey calls for international action and aims to make itself a regional hub to organize conservation work against pollution and other environmental threats to the sea

A ministerial session during a four-day summit on preserving the Mediterranean Sea kicked off in the southern Turkish province of Antalya Thursday. In his keynote speech, Minister of Environment, Urbanization and Climate Change Murat Kurum urged countries littoral to the sea and the international community, in general, to contribute to environmental protection efforts. Kurum also called on other countries’ support for establishing a Regional Activity Center in Turkey for the coordination of joint efforts.

The summit, called the COP22 meeting, is a version of the global climate change summit exclusive to the Mediterranean and has brought together “Contracting Parties to the Barcelona Convention and Its Protocols,” which was adopted in 1995.

It hosts many participants, from environment ministers to academics and activists to representatives of international environmental organizations. Turkey also took over the rotating presidency of the Barcelona Convention secretariat in the event, which will conclude on Friday.

Over the past two days, participants discussed a wide range of issues about the future of the Mediterranean Sea, from assessment of pollution levels to waste disposal, as well as conservation of species endemic to the sea and the threats it faces.

A ministerial declaration on decisions taken at the summit is expected to be announced later at the event after a vote.

The impact of climate change looms large over the future of the massive water body, which stretches across 21 countries and is home to a rich fauna and flora, including nearly 12,000 endemic species. The summit’s theme includes leaving the garbage-free Mediterranean to future generations, preserving biodiversity and balancing climate.

Kurum told fellow ministers that the Mediterranean Basin has been facing the pressures of climate change, pollution, loss of biodiversity and invasive species. “It is vital to determine a roadmap here to address these challenges. Every decision we take here will be a turning point for our Mediterranean Sea and the Earth,” he said.

The minister highlighted that the Mediterranean Basin was one of the most sensitive areas in terms of climate change and pointed out the disasters Mediterranean countries faced because of climate change, from floods and wildfires to drought. “These negative developments also inflict major economic losses,” he added.

Kurum said rising sea levels pose a danger, citing a study that showed 6 centimeters (2.3 inches) rise in the past two decades, “which is projected to damage the coasts and cultural heritage sites there.” He also cited an increase in seawater temperatures which is dangerous to marine ecosystems.

“Our country suffered from three incidents related to climate change this year alone. We lost 150,000 hectares of forests to fires in Antalya, Muğla and other provinces. We experienced flood disasters in our northern provinces and a marine mucilage problem in the Marmara Sea. All these developments highlight the urgent need to develop methods to fight climate change. The culprit of these crises that Turkey and other countries face is clear,” he said, citing excessive, uncontrolled growth of developed countries in the past two centuries, which exploited air, water and soil and excessive consumption.

"Everyone, especially those who caused the climate crisis, should take action urgently to restore global justice. As Mediterranean countries, we will demonstrate a strong will and contribute to the global struggle against the climate crisis. Every decision we make here, every joint effort, will serve as a recipe to resolve similar problems in 192 countries," Kurum said. The minister noted that establishing a Regional Activity Center would serve this purpose for the future of the Mediterranean.

“Though we do not have a historical responsibility on these issues, we are doing our part in the fight against climate change in a decisive manner. In this context, our Parliament ratified the Paris Agreement. We are taking strong steps for net-zero emissions by 2053 and as part of the Green Development Revolution. We shared our long-term plans for environmental protection and solutions with the world,” he added.

First lady Emine Erdoğan is also attending the summit and was scheduled to preside at a women leaders' event. Erdoğan is the patron of the Zero Waste project for a wholesome approach to recycling. The project was later expanded to the seas with the “Zero Waste Blue” program that signaled Turkey’s commitment to keeping its waters clean with cleaning campaigns and certification of beaches based on their pollution levels. Kurum said that Zero Waste Blue was important to Turkey’s efforts against climate change, preserving natural habitats and cutting costs.

Kurum highlighted the increase in maritime pollution stemming from single-use plastics at the time of the COVID-19 pandemic and stressed the need to pursue an integrated approach to better inspect the chain of production, consumption and disposal.