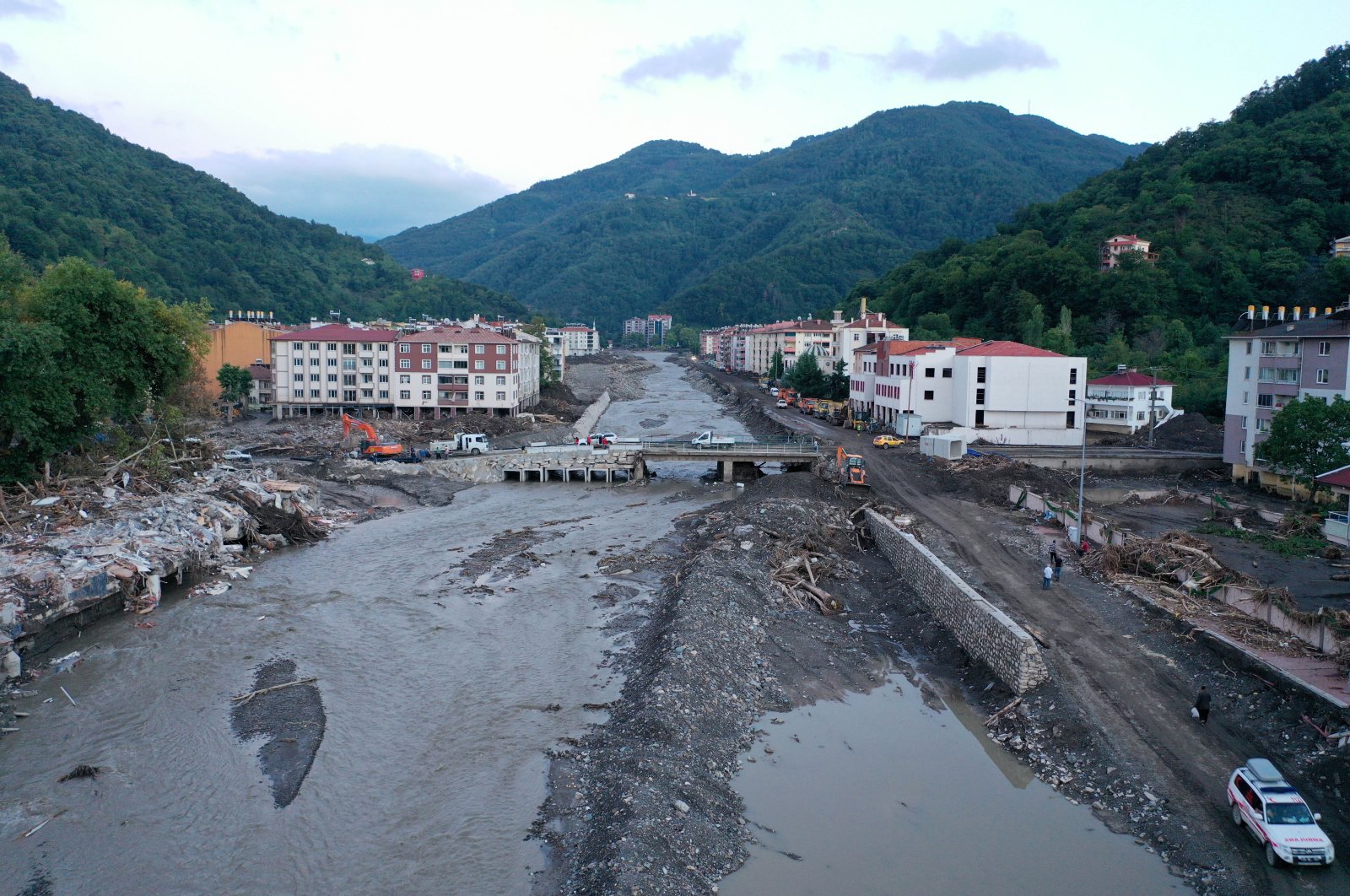 Floods following torrential rain on Aug. 11 claimed 82 lives and a stream that overflowed its banks is blamed for some losses. Ezine stream in the Bozkurt district of the northern Turkish province of Kastamonu will undergo “rehabilitation” to limit future damage from similar disasters.

Three buildings on the banks of the stream crossing through the small district were partially collapsed when heavy precipitation caused the stream to pump water into its banks. Authorities have pledged to rebuild the parts of town devastated by the floods. Under new plans reported by local media, a 4,500-meter (2.8-mile) long retaining wall will be built along the banks of the stream, along with four arched bridges that will be constructed in place of the collapsed flat bridges.

Bozkurt, along with the Ayancık district of Sinop province, was one of the hardest-hit places in floods, during which waters reached a height of 4 meters (13 feet) in some places. Seventy people, mostly in the district, were killed in the floods in Kastamonu, while the search is underway for some 10 people. Crews finished removing debris strewn across streets of the district this week, while buildings covered in mud are still being cleaned.

Associate professor Miraç Aydın, an expert on Basin Management at Kastamonu University, says the stream’s bed “expanded 40 meters” during the floods and this was what caused the collapse of buildings. “There should be buffer zones on the stream’s banks. With such a zone, the destruction would be much less severe,” Aydın told Anadolu Agency (AA) on Tuesday. He called on authorities not to allow residences on the banks of the stream. “Settlements should be located 100 to 200 meters away,” he warned.

The stream is located on steep land, aggravating the intensity of the flow of water in case of a flood. Aydın said the floods were linked to the impact of climate change. “We don’t see steady precipitation levels that much. For instance, the high precipitation that hit Rize and Dereli was one of a kind in a century in terms of severe rainfall. We see precipitation rates doubling, tripling. In (Bozkurt), precipitation of 40 kilograms per square meter was recorded in August 2020 and the day the floods hit, it was 139 kilograms per square meter,” he pointed out. Aydın also called for an early warning system against floods to prevent future disasters.

The Black Sea region is prone to sporadic rainfall due to its climate, but floods stemming from heavy rainfall have started to become more deadly. Houses built on river beds in a region where mountainous terrain challenges construction worsen fatalities. Climate change, which has been changing weather patterns across the country, is also a culprit in disasters, with rising seawater temperatures increasing the instances of heavy rainfall in recent years.