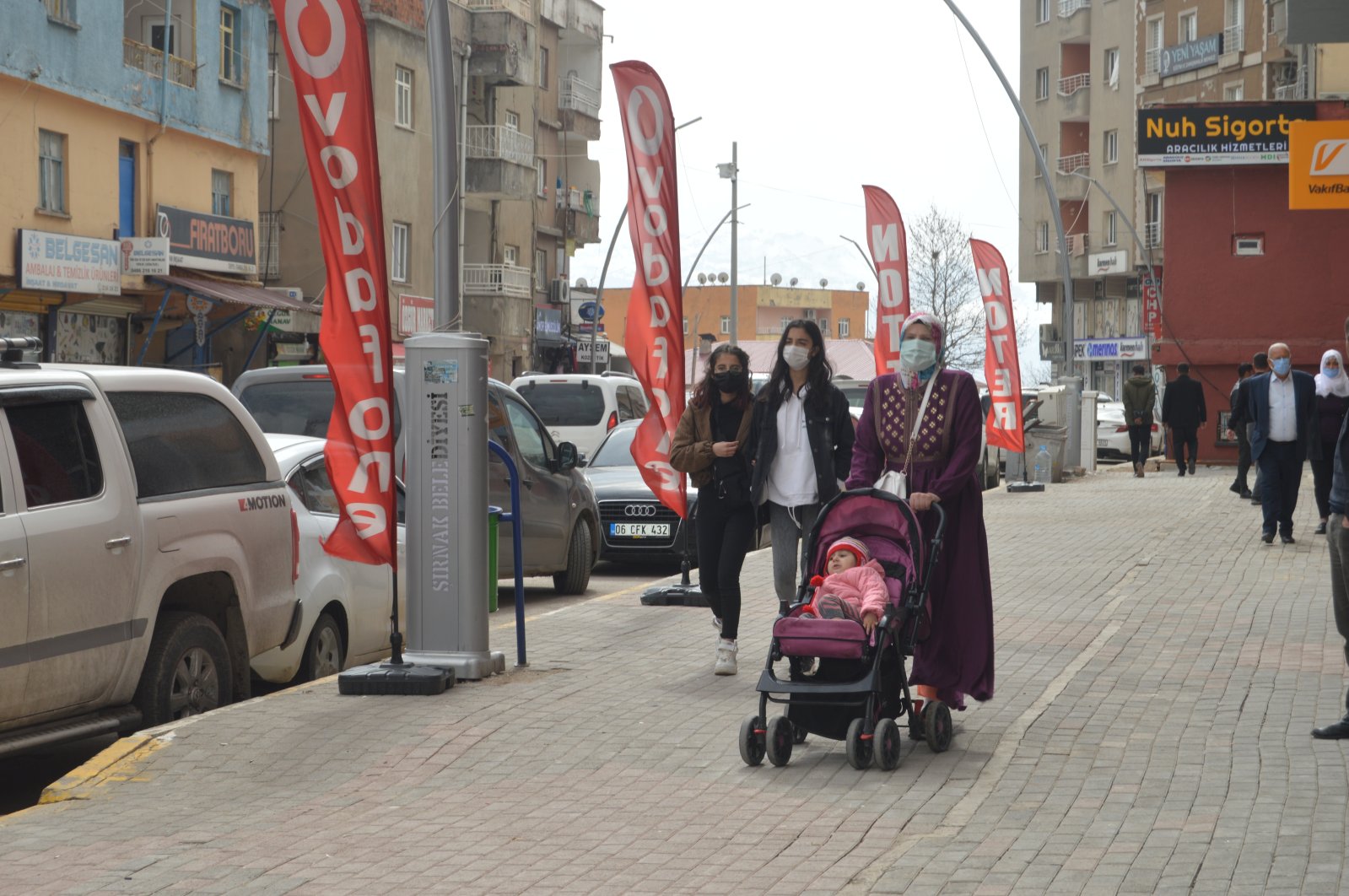 Blue may be associated with sadness in English but for Şırnak, it is a color marking a state of relief. In this new era of giving color codes to provinces with coronavirus risk in Turkey, this southeastern province is currently the only location where the number of weekly cases is below 10 per 100,000 people.

Şırnak, home to about 537,000 people, long shared the distinction of having the lowest number of COVID-19 cases with neighboring Hakkari. But in the past two weeks of March, it found itself the only place among 81 provinces in that status, marked with blue on a map devised by the Health Ministry.

Red means a very high risk for provinces based on the number of cases, and provinces categorized with orange and yellow, respectively, indicate lower risk.

Authorities attribute the success of keeping the cases low both to strict measures and efficient tracking of patients, as well as a high level of vigilance by locals in following the rules, such as mandatory masks and social distancing.

Interestingly, all southeastern provinces boast the lowest numbers of cases, and Şırnak is followed by Siirt, Hakkari, Mardin and Şanlıurfa in the region, while the Black Sea provinces failed to leave the “red” list due to a high number of cases, despite measures.

Currently, there is an average of eight cases per 100,000 in the province, which borders both Syria and Iraq.

Ismail Başıbüyük, the head of the Directorate of Health in Şırnak, told reporters on Monday that obtaining “blue” status was the result of the endeavors of mobile crews and high compliance among the public to the rules. The mobile crews he refers to are civil servants who routinely inspect busy places for violations of the rules, namely failure to wear masks while in a crowd and keeping a distance of at least 1.5 meters (5 feet) from others. “There was a time while the cases were climbing up, we noticed it was due to a high number of shoppers in some businesses. Then, we decided to pay visits to these businesses and inspected them. To this day, our crews are still on the field, checking some places at least five times a day,” he said.

As a result, they saw improvement in compliance with rules in those places. The province also taps into video cameras used for security purposes in downtown Şırnak to detect areas where an unusually high number of people not wearing masks are present.

“We immediately intervene wherever the cases are concentrated. Law enforcement helps in enforcing rules and we strive to raise awareness among people,” Başıbüyük said. But Şırnak did not completely eliminate the outbreak yet and he warns that people should not stop complying with the rules just because the numbers are low.

Elif Kabul, a local, told Anadolu Agency (AA) that she thinks the people of Şırnak are more compliant with rules than people in other provinces. “They also rarely go out. I am proud of being a resident of Şırnak,” she said.

Mehmet Bilir, another resident, said they appreciated the local authorities’ work on informing the public about the impact of the pandemic. “This is a success story for us and I know it was also made possible with people not going out as much, except for shopping for basic needs,” he said.

According to the latest figures shared by the Health Ministry, the northern province of Samsun leads the country for the highest number of cases, 508 per 100,000, and no province with a “blue” color, or below 10 cases, have been indicated on the outbreak map. The dramatic change came after a “normalization” process, which began on March 1. The government had ordered the lifting of restrictions, including the Saturday curfew, and reopening of businesses such as restaurants and cafes for provinces with relatively low risk.

However, the sight of people flocking to the streets after the start of this new process had raised concerns. Experts also say that new faster-spreading virus variants have been reported in the country since January, which might be another culprit in the new surge.