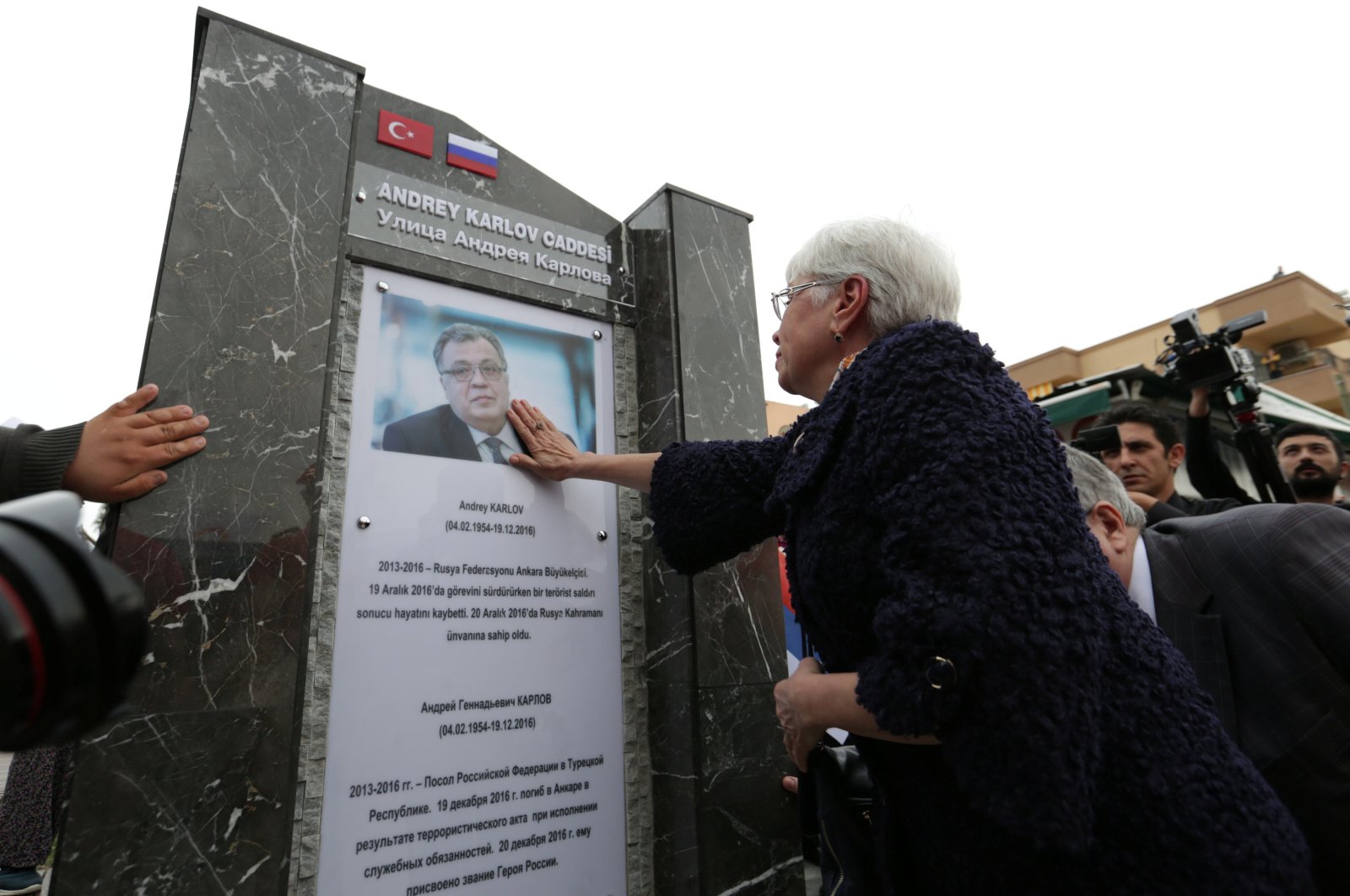 Marina Karlova, the widow of Andrei Karlov, touches a photo of the late envoy at a ceremony to name a street after him, in Antalya, southern Turkey, March 22, 2018. (REUTERS PHOTO)
by DAILY SABAH Apr 19, 2021 12:59 pm
RECOMMENDED

In a detailed verdict made public on Monday, a court in the capital Ankara reasoned that Mevlüt Mert Altıntaş, murderer of Russian Ambassador to Turkey Andrei Karlov, was “a secret member of FETÖ,” referring to the Gülenist Terror Group.

Altıntaş, an off-duty police officer, was killed in a shootout with police after he gunned down Karlov during an event in the capital on Dec. 19, 2016. In a trial on the murder that concluded in March, five people were sentenced to life. They included civilians who were accused of working as “handlers” of Altıntaş on behalf of the terrorist group.

The detailed verdict says the assassination was the work of terrorist group’s infiltrators in the law enforcement and National Intelligence Organization (MIT). Altıntaş was “hand-picked” by FETÖ and was secretly raised as a loyal member of the group.

The verdict also said that the assassination was part of a chain of events perpetrated by FETÖ, including a raid on Syrian-bound trucks of MIT and finally, the July 15, 2016 coup attempt, the work of the military infiltrators of the terrorist group. “All these three have a common purpose: to overthrow the constitutional order in Turkey and replace it with another one. Spoiling Russian-Turkish relations was only one of the goals of the attack. Others were to boost the morale of members of FETÖ and pave the way for the coup attempt,” the verdict says. The terrorist group was facing increased scrutiny at the time of the attack and thousands of people were being interrogated, detained or arrested.

The indictment against the defendants said that FETÖ tried to undermine Turkish-Russian relations and create a perception that Turkey was an unsafe place for diplomats. FETÖ originally instructed Altıntaş to shoot Karlov in June 2016 at the headquarters of the ruling Justice and Development (AK Party) where the ambassador was scheduled to attend a dinner for foreign diplomats, the prosecutor said. Karlov was unable to attend the dinner that would take place one month before FETÖ’s coup attempt that killed 251 people. The prosecutor said the assassination attempt before the planned coup would be “a step to incite chaos in the country to pave the way for a takeover by putschists. It would also instigate a conflict between Turkey and Russia.”

FETÖ is known for its meticulous efforts to infiltrate everywhere, from the judiciary to law enforcement and the military. For decades, it succeeded in planting its members without drawing much attention. Although it was known to authorities that some civil servants, from judges to police chiefs, had ties to the group – which has long posed as a religious movement – the terrorist group also controlled a sizeable network of infiltrators. The infiltrators, disclosed thanks to countless investigations since the 2016 coup attempt, had managed to hide their affiliation with the group.

According to the verdict, the assassination was plotted by the group’s infiltrators in intelligence and law enforcement. Vehbi Kürşat Akalın, a former intelligence officer sentenced to aggravated life imprisonment, collected information about Karlov and handed it over to Hüseyin Kötüce, a senior member of FETÖ. Kötüce, also sentenced to life, conveyed the information to the terrorist group’s fugitive leader, Fetullah Gülen. Eventually, Gülen ordered the assassination and his subordinates relayed his orders to Altıntaş. Altıntaş, who was initially thought to be a sympathizer of the terrorist group Nusra Front, was actually planted in a religious community by FETÖ, upon instructions of Gülen to his followers, to avoid detection of his links to FETÖ. Altıntaş sought to join one such community to disguise his ties to the terrorist group, the verdict says.