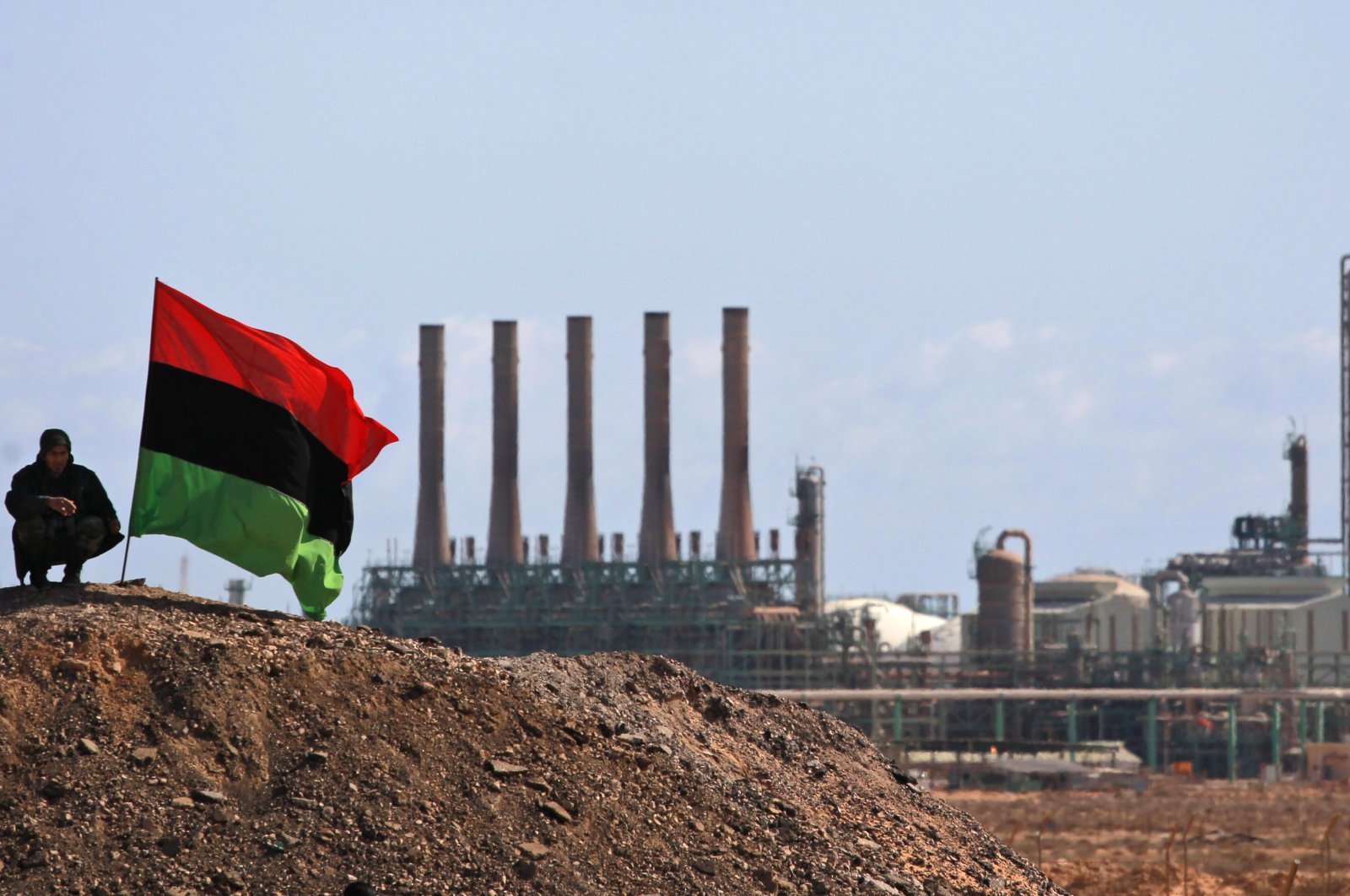 A Libyan rebel, part of the forces against Libyan leader Moammar Gadhafi, sits next to a pre-Gadhafi flag as he guards outside the refinery in Ras Lanuf, eastern Libya, on March 7, 2011. (AP File Photo)
by DAILY SABAH WITH AGENCIES Sep 16, 2021 10:45 am
RECOMMENDED

On Wednesday it said operations had also returned to normal at the Hariga oil terminal after protesters had ended their blockade.

Protesters at those two ports and another, Hariga, had been blocking exports since last week and demanding jobs for local people. NOC said on Wednesday that operations had also resumed at Hariga.

A company statement said that NOC's chairperson, Mustafa Sanalla, had held talks with local elders who had helped in bringing an end to the protests.

Security issues in Libya, where a fragile peace process has installed a unity government, have repeatedly threatened to undermine oil output that has topped 1.3 million barrels per day (bpd) this year.

Last year, forces loyal to the putschist Gen. Khalifa Haftar blockaded the main oil terminals in eastern Libya the day before a summit in Berlin on Jan. 19, 2020, and almost entirely halted Libyan oil output for months.

Oil production has plunged by around three-quarters since Haftar launched a blockade. The blockade has also cut off revenue for state institutions operating across the country. In September 2020 Haftar agreed to lift the blockade, which the NOC has estimated resulted in lost revenues of $10 billion.

The putschist general was also accused of selling Libya’s oil through illegal corporations.

According to sources speaking to Ihlas News Agency (IHA), Haftar signed an illegal agreement, ignoring the NOC, to monopolize the oil sector in the country for 10 years and form a parallel company.

The NOC is officially responsible for the extraction, processing, distribution and export of oil in Libya, while oil extracted from the region under the control of Haftar’s forces has to be operated by the Brega oil complex in eastern Libya.

The sources also argued that Haftar’s illegal company would sell the oil through the sea to another company in the United Arab Emirates (UAE).

Oil is the cornerstone of the Libyan economy and the country’s only real source of revenue. Libya is currently ruled by an interim government that includes a three-member Presidential Council and a Cabinet. Its appointment in February under a United Nations-led process has revived hopes of stability in oil-rich Libya. The government is entrusted with leading the country into general elections in December 2021.

For years, the NOC has maintained its independence from Libya’s feuding political players and enjoyed the backing of the international community. However, the NOC has recently faced attempts by the new interim government to tread on its turf.