24 to run in Libyan elections as obstacles, divisions persist 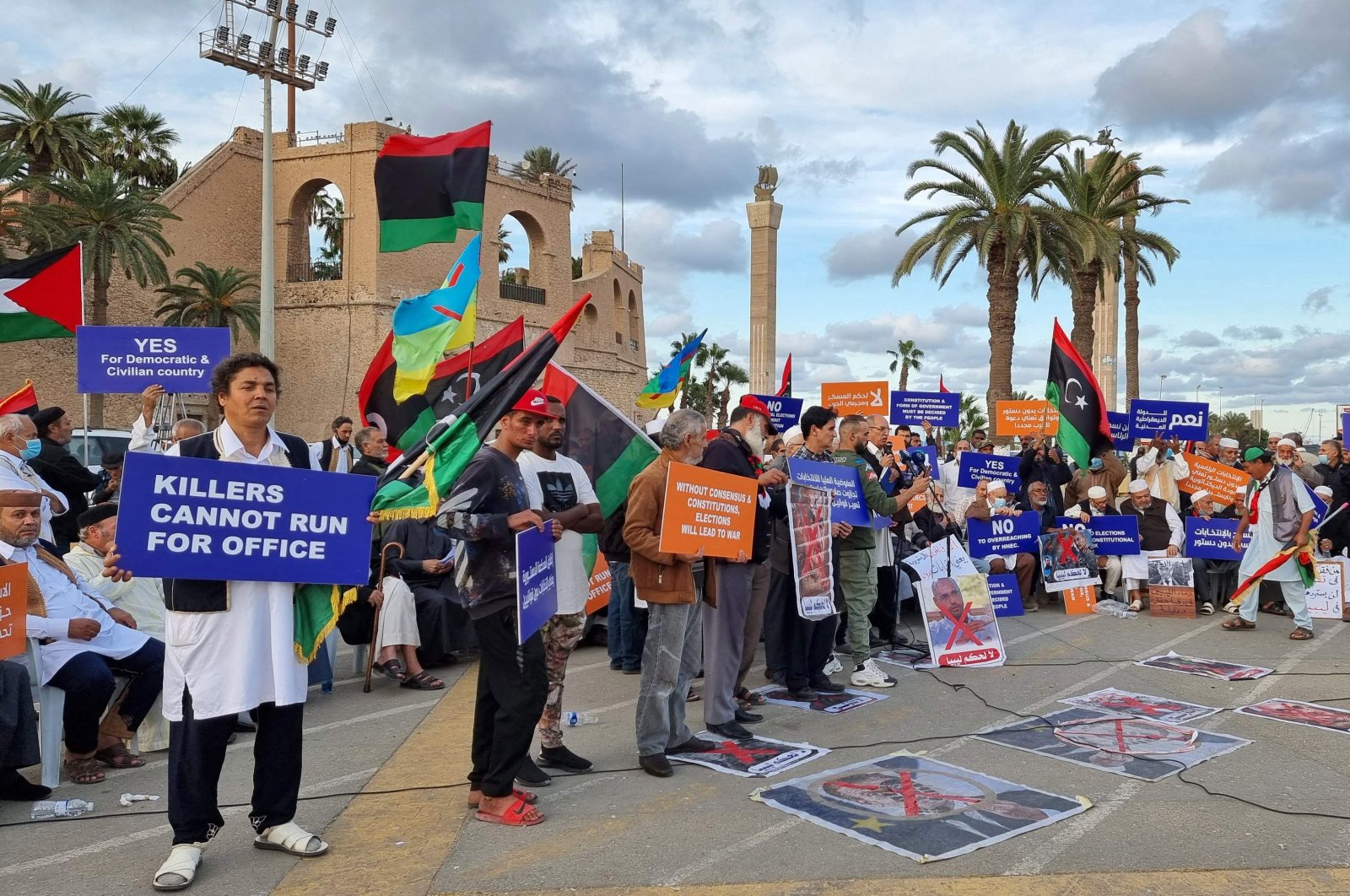 People gather at Martyrs' Square in Libya's capital Tripoli to protest against the candidacy of Seif al-Islam Gadhafi in the presidential polls, Nov. 19, 2021. (AFP Photo)
by DAILY SABAH WITH AGENCIES Nov 21, 2021 1:27 pm
RECOMMENDED

Twenty-four people have submitted applications to run in Libya's presidential elections scheduled for December and aiming to put the war-torn country back on the political normalization track as deep divisions still exist, the High National Election Committee (HNEC) said.

Libya's first-ever direct presidential poll, due on Dec. 24, comes as the United Nations seeks to end a decade of violence in the oil-rich nation since a NATO-backed uprising that toppled the dictator Moammar Gadhafi in 2011.

Nearly 3 million Libyans – out of a total population of some 7 million – have so far registered to vote.

But the runup to the vote has been marred by bitter divisions over the legal and constitutional framework, and many in western Libya have rejected any run by an eastern-based warlord, who led a devastating but ultimately unsuccessful campaign to seize the capital before he was pushed back in 2020.

Hundreds of Libyans protested in Tripoli Friday against "war criminals" running in next month's presidential election, after eastern putschist Gen. Khalifa Haftar and a son of Gadhafi announced bids.

Demonstrators stamped on posters of Haftar and Seif al-Islam Gadhafi and voiced anger over a controversial electoral law criticized for bypassing due process and favoring a bid by Haftar.

One speaker called for "all those who have committed crimes against the Libyan people" to be disqualified from the race.

"The blood of our martyrs wasn't spilled in vain," said another.

One demonstrator on Friday carried a placard reading "No to elections without a constitutional basis!"

Protesters shouted: "Yes to elections, no to criminals!"

The head of the High Council of State, the parliament's upper house based in Tripoli, said he would boycott the vote and warned against holding elections without a legal framework agreed by all sides.

"The process we're seeing today in Libya is bizarre. There's no constitutional basis or clean electoral list," Khalid al-Mishri said in a video on Facebook.

"We're aware of the strong desire among all Libyans for change."

"I came to the HNEC office in Benghazi to submit the documents necessary for my candidacy," said Saleh, appealing to Libyans to take part in the vote, in a speech broadcast by the Libya Tantakheb station.

Saleh is considered to be close to Haftar, who registered his name in the race on Tuesday.

In September, Saleh ratified a contentious electoral law criticized for bypassing due process and favoring a bid by Haftar.

Foreign Minister Najla al-Manhoush, on the other hand, criticized interference in Libya.

“We are witnessing firsthand very uncoordinated multilateral interference in our country, which in turn has escalated the local as well as regional insecurity and instability,” she told the IISS Manama Dialogue security forum in Bahrain.

“My country, Libya, is going through very critical times. We must establish a dialogue that represents all Libyans from all regions of the country.”

Despite a year of relative peace since the October 2020 cease-fire, a U.N.-led transition process has been overshadowed by wrangling over the legal basis for upcoming elections and whether the various factions will recognize the results of the polls as well as the continued presence of foreign fighters and mercenaries.