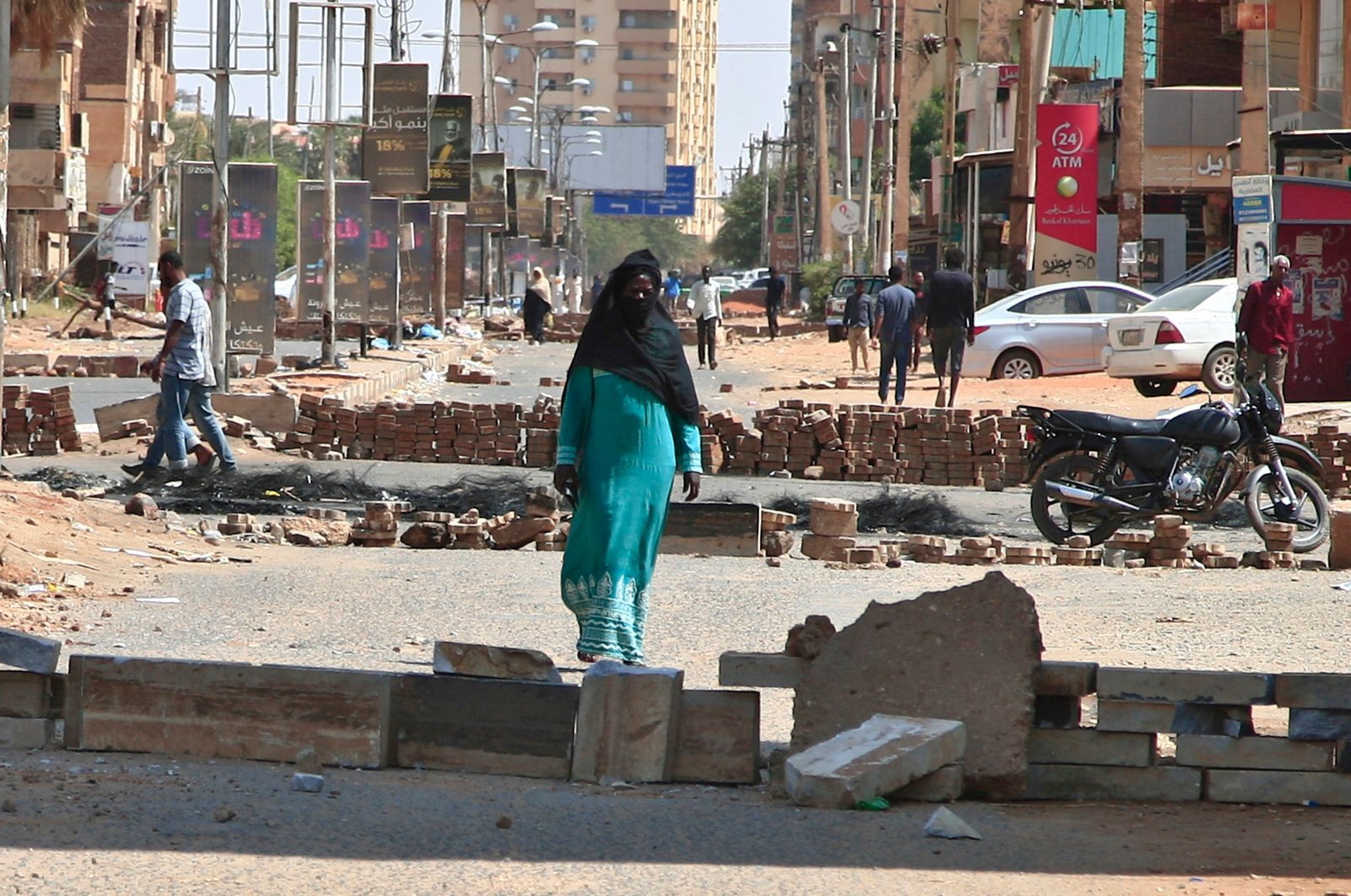 Sudanese anti-coup protesters use bricks to barricade a street in the capital Khartoum on Oct. 27, 2021, amid ongoing demonstrations against a military takeover that has sparked widespread international condemnation. (AFP Photo)
by French Press Agency - AFP Oct 27, 2021 3:16 pm
RECOMMENDED

Sudanese security forces launched sweeping arrests of anti-coup protesters Wednesday, in a bid to end three days of demonstrations against a military takeover that has sparked widespread international condemnation as the African Union (AU) ended the country's membership.

"Police forces have removed all the barricades since Wednesday morning and arrested all the people who stood near them," said Hady Bashir, a protester, after Agence France-Presse (AFP) correspondents saw security forces clear rocks and tires blocking major streets in Khartoum.

Meanwhile, AU has suspended Sudan's participation in all activities until the restoration of the civilian-led authority it said in a communique dated on Tuesday. The pan-African body said the suspension would be in place until “the effective restoration” of the transitional authority steering the country towards elections.

Since top General Abdel-Fattah al-Burhan on Monday ordered the dissolution of the government and declared a state of emergency, thousands of citizens have maintained protests, chanting "No to military rule."

Shops have remained closed following calls for a campaign of civil disobedience, as pro-democracy movements ratcheted up calls for "million-strong protests" on Saturday. On Tuesday, al-Burhan allowed home Prime Minister Abdalla Hamdok – who was detained by the military Monday along with his ministers and civilian members of Sudan's ruling council – following intense international pressure. But Hamdok and his wife were returned "under close surveillance," his office said Tuesday, while other ministers and civilian leaders remain under full military arrest.

In a joint statement, diplomats from the U.S., U.K. and Norway – the grouping previously involved in mediating Sudanese conflicts known as "The Troika" – as well as the European Union and Switzerland, called for an urgent face-to-face meeting with Hamdok. "We continue to recognize the Prime Minister and his cabinet as the constitutional leaders of the transitional government," the statement read.

The coup comes after a rocky two-year transition outlined in an August 2019 power-sharing deal between military and civilians after the ouster of Omar al-Bashir on the back of mass protests against his rule. Monday's coup was the latest in one of the world's most underdeveloped countries, which has experienced only rare democratic interludes since independence in 1956.

U.N. High Commissioner for Human Rights Michelle Bachelet said "it would be disastrous if Sudan goes backwards after finally bringing an end to decades of repressive dictatorship."

Burhan, who became de facto head of state in 2019 as leader of the joint military-civilian Sovereign Council, was also a senior general during Bashir's three-decade long hardline rule, and has the support of Sudan's much feared paramilitary Rapid Support Forces. Tensions had long simmered between the civilian and military sides, but divisions ratcheted up after what the government said was a failed coup on Sept. 21 this year.

Four people were killed and scores wounded on Monday when soldiers opened fire on protesters, according to a doctors' group. Violence against protesters has mounted, as security forces launched "vengeful attacks" on protests nationwide, said the Sudanese Professionals Association (SPA), an umbrella of unions which were instrumental in the anti-Bashir protests.

Internet services have been blocked. But Khartoum airport, which has been closed to flights, is set to reopen on Wednesday afternoon, the civil aviation authority said. U.S. Secretary of State Antony Blinken spoke with Hamdok Tuesday, the State Department said, welcoming the prime minister's return home from custody but expressing "deep concern" about the takeover and reiterating U.S. support for a civilian-led democracy.

Washington, a key backer of the transition, has suspended hundreds of millions of dollars in aid over the coup. The EU has also threatened "serious consequences" for Sudan's rulers, including suspension of financial support. Analysts warned that the putsch may risk leaving the country "shunned" and risk much-needed international assistance unlocked under Hamdok's government to rescue Sudan's economy, battered by decades of U.S. sanctions and by mismanagement.

The United Nations Security Council held an emergency meeting late Tuesday to discuss the crisis, and the Arab League also expressed concern. Sudan's ambassadors to the U.S., Belgium, France and Switzerland on Tuesday said they backed the civilian leaders, declaring their diplomatic missions as "embassies of the Sudanese people and their revolution," according to the Information Ministry.

Al-Bashir has been jailed since his ouster in 2019 and convicted of corruption. He is on trial for the 1989 coup that brought him to power. The former strongman is also wanted by the International Criminal Court (ICC) on charges of genocide in the civil war in Darfur.