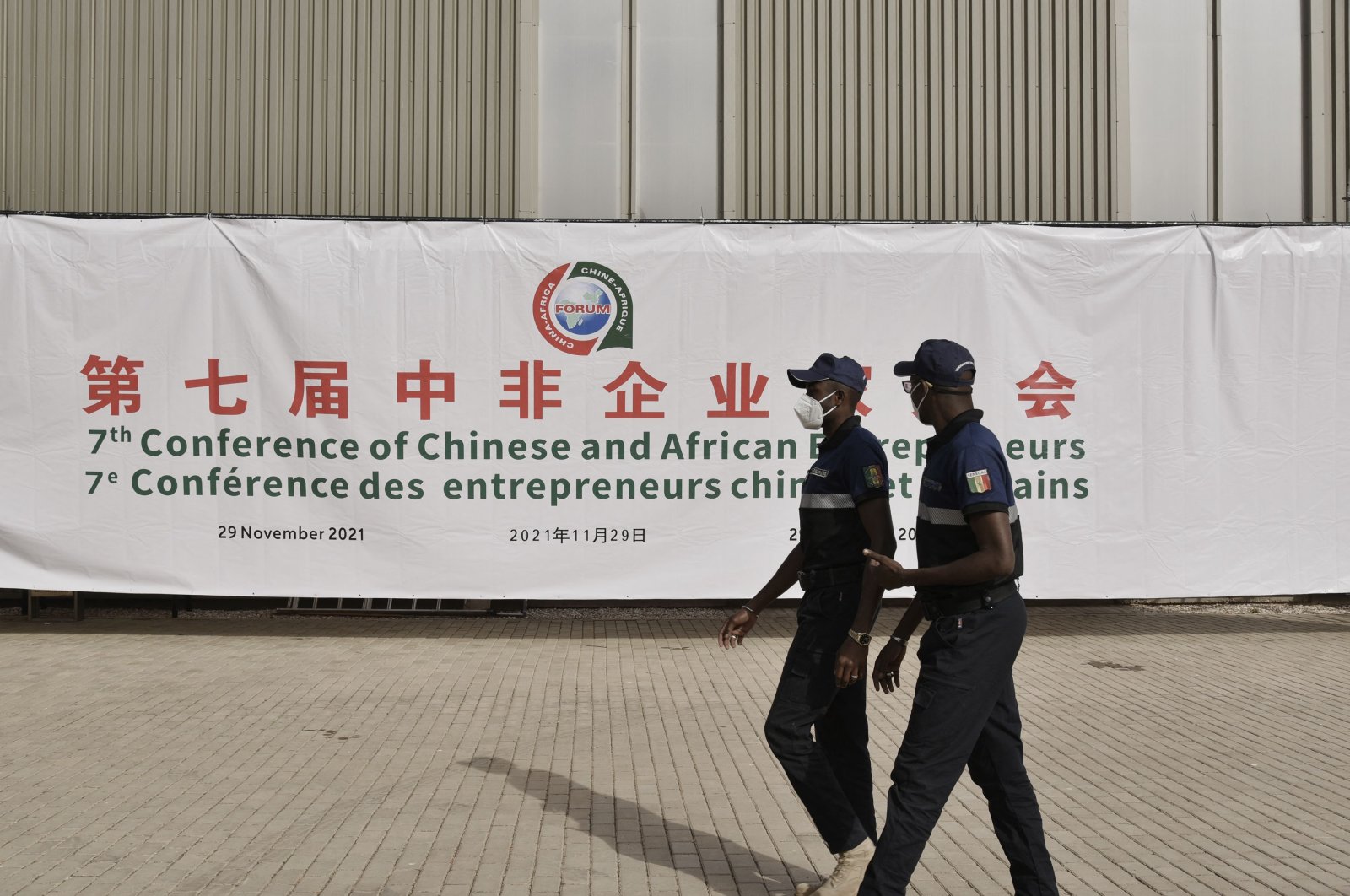 Security officers walk past a banner at the entrance of a conference hall during the China-Africa Cooperation (FOCAC) meeting at the Diamniadio in Dakar, Senegal, on Nov. 29, 2021. (AFP Photo)
by Agencies Nov 29, 2021 4:29 pm
RECOMMENDED

China's President Xi Jinping on Monday pledged to offer one billion COVID-19 vaccine doses to Africa, in a speech made via videolink to a China-Africa summit in Senegal's capital Dakar.

The Chinese leader said that his country would donate 600 million doses directly. A further 400 million doses would come from other sources, such as investments in production sites.

He also said China-Africa cross-border yuan center would be set up to provide African financial institutions with a credit line of $10 billion, adding that China would encourage its companies to invest no less than $10 billion in Africa over the next three years.

The goal is to get African vaccination rates higher, said Xi, noting an African Union (AU) goal of getting 60% of the population vaccinated this year, even though the vaccination rate is in single digits in large areas of the continent. To help more, China is prepared to send 1,500 medical experts to help in Africa, Xi said according to remarks carried by the Deutsche Presse-Agentur (dpa).

China invests heavily in Africa, and is the continent's largest trading partner with direct trade worth over $200 billion in 2019, according to the Chinese embassy in Dakar.

"We must continue to fight together against Covid," Xi told the summit. "We must prioritise the protection of our people and close the vaccination gap".

The move came as the World Health Organization (WHO) said Monday that the heavily mutated omicron coronavirus variant is likely to spread internationally and poses a very high risk of infection surges that could have "severe consequences" in some places.

No omicron-linked deaths had yet been reported, though further research was needed to assess its potential to resist vaccines and immunity induced by previous infections, it added.

"Omicron has an unprecedented number of spike mutations, some of which are concerning for their potential impact on the trajectory of the pandemic," the WHO said. "The overall global risk... is assessed as very high."

WHO Director-General Tedros Adhanom Ghebreyesus said omicron's emergence showed how "perilous and precarious" the situation was.

"Omicron demonstrates just why the world needs a new accord on pandemics," he said at the start of an assembly of health ministers expected to launch negotiations on such an agreement. "Our current system disincentivizes countries from alerting others to threats that will inevitably land on their shores."

The new global deal, expected by May 2024, would cover issues such as sharing of data and genome sequences of emerging viruses, and of any potential vaccines derived from research.

Scientist Richard Hatchett, CEO of the Coalition for Epidemic Preparedness Innovations (CEPI), a foundation that funds vaccine development, said omicron's emergence had fulfilled predictions that transmission of the virus in areas with low vaccination rates would speed its evolution.

"The inequity that has characterized the global response has now come home to roost," he told the talks, noting that Botswana and South Africa had fully vaccinated less than a quarter of their populations, according to Reuters.

Omicron was first reported on Nov. 24 from South Africa, where infections have risen steeply. It has since spread to more than a dozen countries, many of which have imposed travel restrictions to try to seal themselves off. Japan on Monday joined Israel in saying it would close its borders completely to foreigners.

The WHO reiterated that, pending further advice, countries should use a "risk-based approach to adjust international travel measures," while acknowledging that a rise in coronavirus cases might lead to higher morbidity and mortality rates.

"The impact on vulnerable populations would be substantial, particularly in countries with low vaccination coverage," it added.

In vaccinated persons, meanwhile, "COVID-19 cases and infections are expected... albeit in a small and predictable proportion."

Overall, there were "considerable uncertainties in the magnitude of immune escape potential of Omicron," and more data was expected in coming weeks.