WHO warns of 'unprecedented' omicron mutations as more cases detected 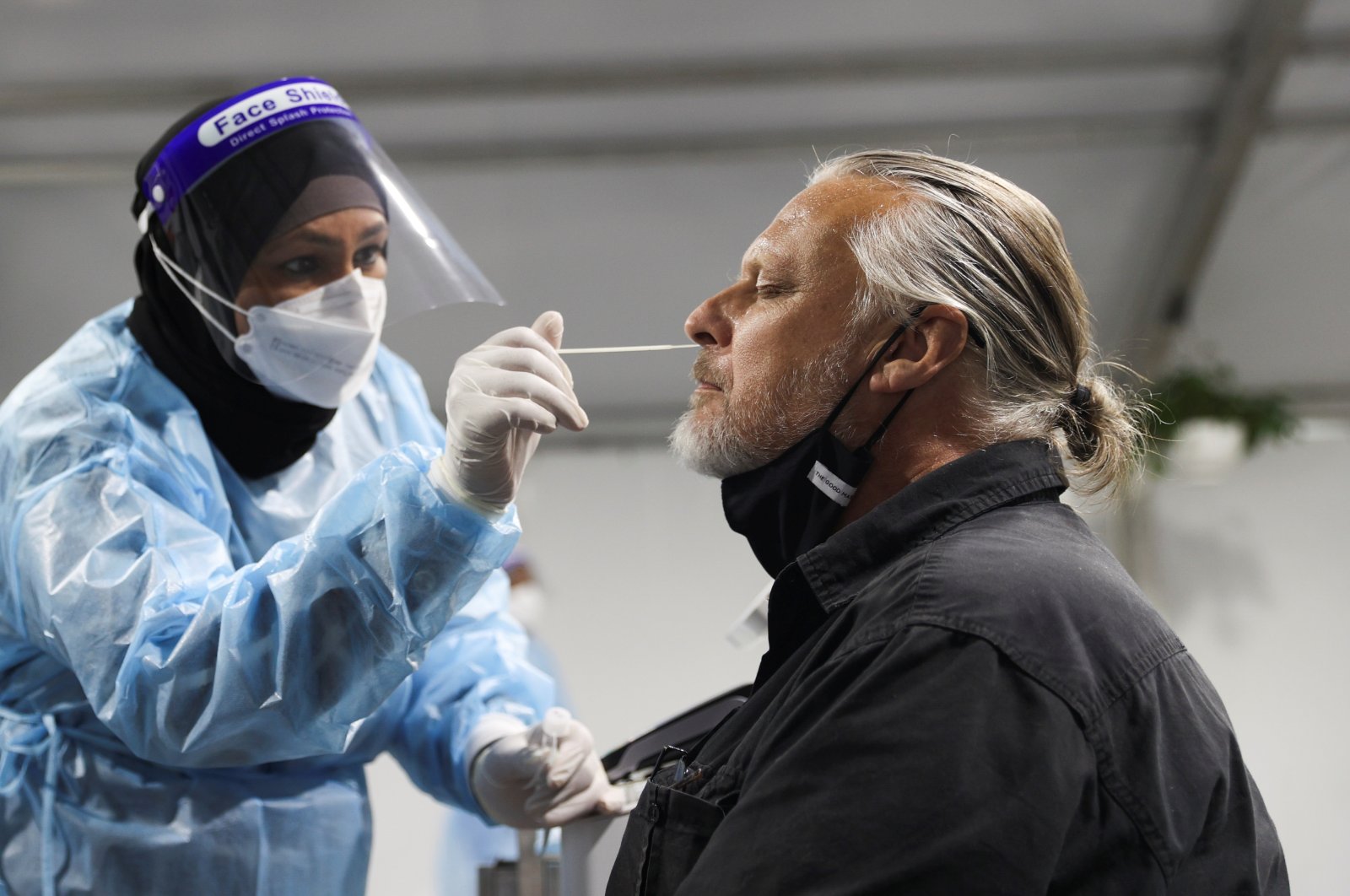 A traveler receives a test for the coronavirus at a pre-departure testing facility, as countries react to the new coronavirus omicron variant, outside the international terminal at Sydney Airport in Sydney, Australia, Nov. 29, 2021. (Reuters Photo)
by DAILY SABAH WITH AGENCIES Nov 29, 2021 11:03 am

The World Health Organization has warned of the variant's unprecedented spike mutations, some of which are concerning for the potential impact on the trajectory of the COVID-19 pandemic, urging countries to 'adjust international travel measures in a timely manner' as reports of the new strain surge around the globe

The omicron variant is likely to spread internationally, posing a "very high" risk for countries where COVID-19 surges could have "severe consequences," the World Health Organisation (WHO) said Monday.

The U.N. agency, in technical advice to its 194 member states, urged them to accelerate vaccination of high-priority groups and to "ensure mitigation plans are in place" to maintain essential health services.

"Omicron has an unprecedented number of spike mutations, some of which are concerning for their potential impact on the trajectory of the pandemic," the WHO said. "The overall global risk related to the new variant of concern, omicron, is assessed as very high."

Further research is needed to better understand omicron's potential to escape protection against immunity induced by vaccines and previous infections, it said, adding that more data was expected in coming weeks. "COVID -19 cases and infections are expected in vaccinated persons, albeit in a small and predictable proportion," it added.

As new reports of the omicron coronavirus strain have emerged around the globe, with Switzerland and Portugal becoming the latest EU states to confirm new variant cases, governments are considering new restrictions, while some of them have already toughened bans, which include refusing entry to people traveling from "red list" countries, to prevent new catastrophes.

Since Nov. 26, 19 cases of the new variant have been confirmed in countries including Britain, Germany, Belgium, Botswana, Hong Kong, Israel, Denmark, Canada, France, Italy and the Netherlands. The first probable case of the omicron variant of COVID-19 was detected in Switzerland late Sunday as the country tightened its entry restrictions to check its spread.

The case relates to a person who returned to Switzerland from South Africa around a week ago, the Federal Office for Public Health said on Twitter. Testing will clarify the situation in the coming days, it added.

Switzerland has ordered that travelers from 19 countries must present a negative test when boarding a flight to the country and must go into quarantine for 10 days on arrival. The list includes Australia, Denmark, Britain, the Czech Republic, South Africa and Israel.

Swiss voters on Sunday backed the government's pandemic response plan by a bigger than expected majority in a referendum, paving the way for the continuation of exceptional measures to stem the rising tide of COVID-19 cases. Some 62.01% voted in favor of a law passed earlier this year to provide financial aid to people hit by the COVID-19 crisis and lay the foundation for certificates giving proof of COVID-19 vaccination, recovery or a negative test. These are currently required to enter bars, restaurants and certain events. According to Reuters, six cases of the omicron variant have also been identified in Scotland, while 13 patients have been reported in Portugal.

"Public Health Scotland will undertake enhanced contact tracing in all cases," Scottish Health Secretary Humza Yousaf said. "This will help establish the origin of the virus and any further individuals they have come into contact with in recent weeks."

Meanwhile, Japan joined Israel in taking the toughest measures against the new coronavirus variant omicron and announced that it would close its borders to foreigners.

The WHO, which flagged the new strain as a "variant of concern," said earlier it could take from "days to several weeks" to understand the level of severity of omicron.

As a precaution to avert a worst-case scenario, Japan will close its borders to foreigners starting Tuesday, Prime Minister Fumio Kishida said, adding that he was ready for criticism that he was being too cautious.

"These are temporary, exceptional measures that we are taking for safety's sake until there is clearer information about the Omicron variant," Kishida told reporters. He did not say how long the restriction would stay. Japanese returning from specified nations would face quarantine in designated facilities, Kishida added.

While Japan has not yet found any omicron infections, Health Minister Shigeyuki Goto said tests were being run to determine if the new variant had infected a traveler from Namibia who tested positive for the virus. Israel's ban took effect from midnight on Sunday. It has also vowed to use counterterrorism phone-tracking technology to combat the new variant.

Australia said it would review plans to reopen its borders to skilled migrants and students from Dec. 1, after reporting its first omicron cases. A national security panel is to meet later in the day to assess border easing due from Wednesday, Prime Minister Scott Morrison said, but added that it was a "bit too early" to reinstate two-week hotel quarantine for foreign travelers.

In a government statement, India's Health Ministry said it will require all travelers coming from "countries at risk" to undergo post-arrival COVID-19 testing. The measure will come into effect on Dec. 1, it added. The ministry underlined that some 5% of travelers from the countries which are not listed in the "at risk" category will also be tested on a random basis.

"So we just take this one step at a time, get the best information, make calm, sensible decisions," Morrison told broadcaster Nine News. Symptoms of omicron are so far mild and could be treated at home, a South African doctor, one of the first to suspect a different variant, has said.

Morocco will ban all inbound international passenger flights for two weeks starting Nov. 29, the government said Sunday. Singapore has deferred the start of vaccinated travel lanes with Middle Eastern countries, such as Qatar, Saudi Arabia and the United Arab Emirates (UAE), in view of their role as "transport nodes" for affected countries, its Health Ministry said.

The wealthy Southeast Asian city-state and neighboring Malaysia reopened their land border, one of the world's busiest, allowing vaccinated travelers to cross after a shutdown that lasted nearly two years.

Britain said it would call an urgent meeting of G-7 health ministers on Monday. U.S. President Joe Biden is to provide fresh details of the variant and the U.S. response on Monday, the White House said in a statement.

South Africa has denounced the measures as unfair and potentially harmful to the economy, saying it was being punished for its scientific ability to identify variants early.

"The prohibition of travel is not informed by science, nor will it be effective in preventing the spread of this variant," South African President Cyril Ramaphosa said Sunday. "The only thing (it) ... will do is to further damage the economies of the affected countries."

Russia's coronavirus task force will soon announce new restrictions related to the omicron variant of COVID-19, the RIA news agency cited the foreign ministry as saying on Monday. RIA reported that Russia had taken some decisions on Friday.

Britain was set Monday to unveil new guidance on extending the rollout of COVID-19 booster shots to the under-40s in light of the rapid rise in cases of the variant of concern. U.K. Prime Minister Boris Johnson has restricted travel to southern Africa, tightened testing rules and made mask wearing compulsory in shops and on transport in response to omicron. He also asked the Joint Committee on Vaccination and Immunisation to urgently review boosters for under-40s, as well as look at reducing the gap between second doses and boosters.

"We're awaiting that advice. I hope it will come, hopefully later today," Health Minister Edward Argar told Sky News, adding he did not know their decision. "I don't think it's been formally delivered, but we'd expect that within the coming hours."

Ministers also want to ramp up the offer of booster jabs, saying even if vaccines prove to be less effective against omicron, they should still offer better protection against it and reduce the number of hospitalizations and deaths. The U.K. Health Security Agency on Sunday said it had identified a third confirmed case of omicron, which scientists say has about double the number of mutations to the spike protein as the currently dominant delta variant.

"I would expect that to rise. We don't know by what speed or by what numbers, so therefore what we're doing is trying to slow it down, but we can't stop it," Argar said. "We're trying to give ourselves the time to understand how it works and how it interacts with the vaccine."

Johnson said the restrictions would be reviewed in three weeks. Asked if the rules could be tightened before then, Argar said, "It's not something I'm anticipating."

Meanwhile, French President Emmanuel Macron published a tweet on Monday to show he had gotten a COVID-19 vaccine booster shot, as France aims to accelerate its vaccination campaign to battle a fifth wave of the virus. Macron published on his official Twitter account a green tick next to the phrases "vaccine booster" and "vaccine against the flu."