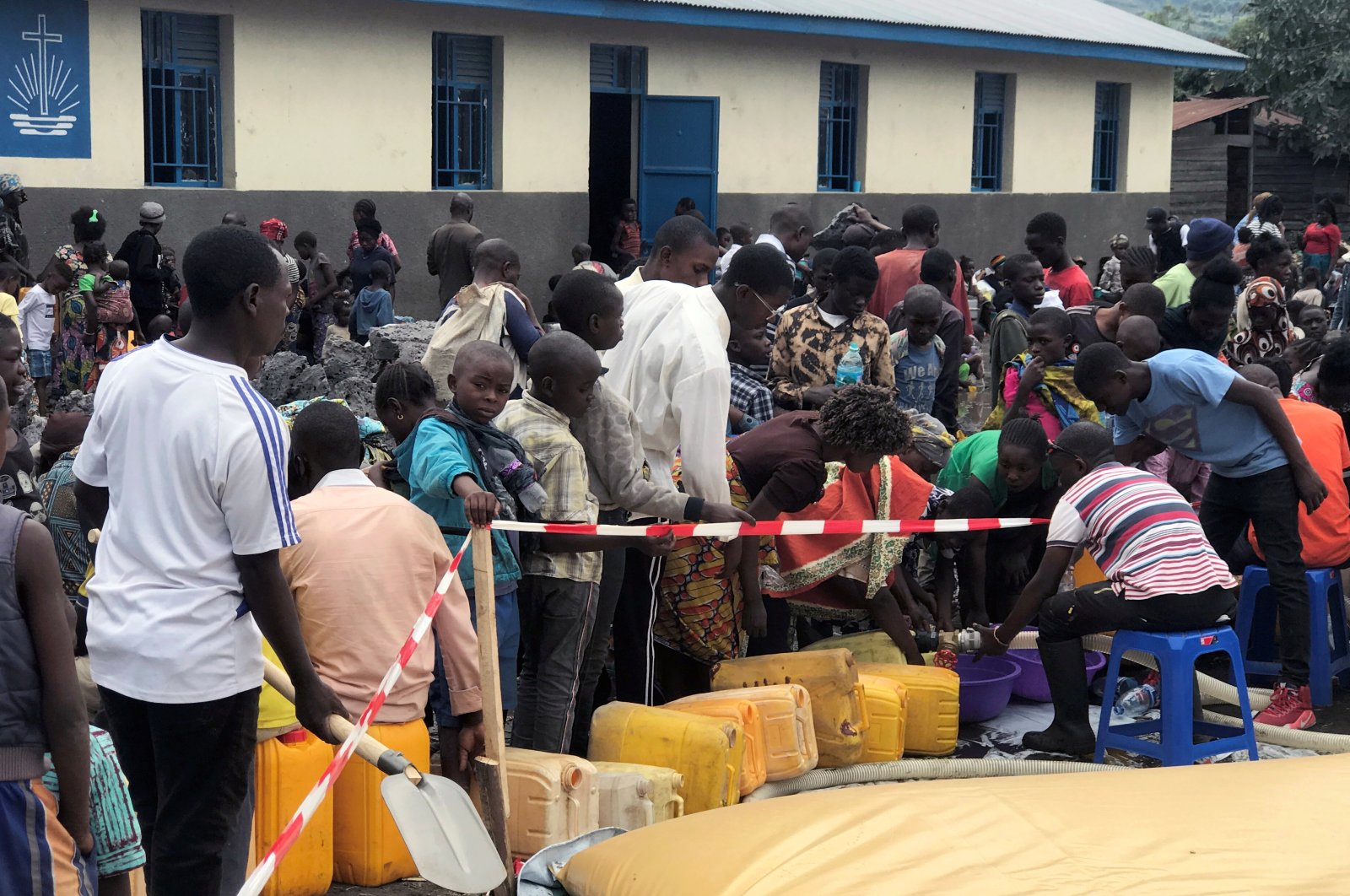 Internally displaced Congolese people who fled from recurrent earth tremors after the volcanic eruption of Mount Nyiragongo, collect water outside a church in Sake town, near Goma, in the Democratic Republic of Congo, May 28, 2021. (Reuters Photo)
by REUTERS
May 30, 2021 8:12 pm

Families who fled the Democratic Republic of Congo's Goma city following forecasts of another volcanic eruption are starving and unable to find shelter as United Nations called for aid and warned about the risk of cholera.

At least 31 people died when Mount Nyiragongo sent a wall of lava spreading toward Goma on Saturday last week, destroying 3,000 homes along the way and cutting a major road used to bring aid to the strife-torn region.

The lava stopped just short of the city limits, but thousands more people fled early on Thursday when the government warned that the volcano, one of the world's most active, could erupt again.

Many escaped to Sake, a town 13 miles (20 kilometers) northwest of Goma that is prone to cholera outbreaks, U.N. children's fund (UNICEF) said.

People slept wherever they could – on the side of the road and inside classrooms and a church. Kabuo Asifiwe Muliwavyo, 36, told Reuters she and her seven children had not eaten since arriving Thursday.

Around 400,000 people need support or protection, UNICEF said in a statement.

"With an increased risk of a cholera outbreak, we are appealing for urgent international assistance to avert what could be a catastrophe for children," UNICEF's representative in Congo, Edouard Beigbeder, said.

Danga Tungulo and his four children slept next to the road in Sake. Some local residents brought them water, but they had not eaten since they left Goma the previous day, he said.

"They told everyone that assistance would be organized, that money would be disbursed by the government," said Hassan Kanga, a lawyer who fled after the eruption. "And yet, you find us under the stars."

The evacuation order was issued around 1 a.m. local time on Thursday after radar images showed molten rock flowing under Goma.

The movement of magma caused cracks in the ground and hundreds of earthquakes, which could allow it to burst through to the surface in a fresh eruption, the Goma Volcano Observatory (OVG) said.

The frequency and intensity of the ground tremors had lessened in the last 24 hours, suggesting the risk of a fresh eruption was subsiding, Celestin Kasareka Mahinda of the OVG said on Friday.

"I don't think we will have a second eruption. The problem is the risk of fractures, but the risk is small, around 20%," he told Reuters.

Congolese authorities, meanwhile, reopened the main road which was split in two by lava, the U.N. Office for Coordination of Humanitarian Affairs (OCHA) said on Thursday.

Goma is a major humanitarian hub supplying aid to a region hit by decades of unrest.