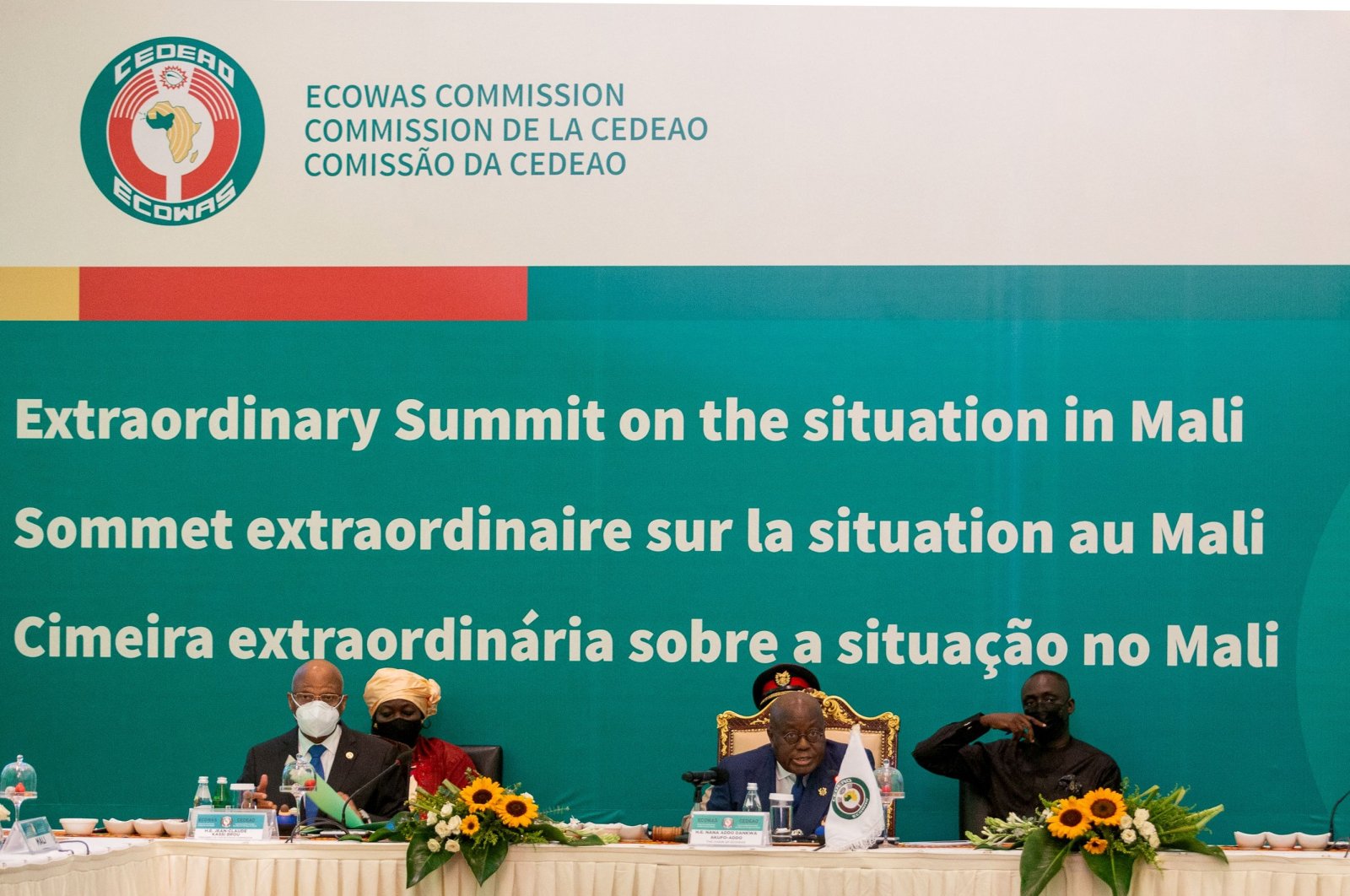 President of Ghana and Chair of the ECOWAS Nana Akufo-Addo (C), addresses dignitaries at the ECOWAS Extraordinary Summit on the situation in Mali in Accra, Ghana, on May 30, 2021. (AFP Photo)
by Daily Sabah with AFP
May 31, 2021 10:38 am

The putsch had sparked deep concerns over stability in the volatile Sahel region and warnings of fresh economic penalties. Ten regional heads of state and three foreign ministers attended the summit in the Ghanaian capital Accra, with former Nigerian president Goodluck Jonathan serving as mediator in the crisis.

"The suspension from ECOWAS takes immediate effect until the deadline of the end of February 2022 when they are supposed to hand over to a democratically elected government," Ghana's Foreign Minister Shirley Ayorkor Botchwey said after the meeting.

The final declaration called for the immediate appointment of a new civilian prime minister and the formation of an "inclusive" government. However, it did not announce sanctions like the ones it imposed following the coup last August when its members temporarily closed their borders with landlocked Mali and stopped financial transactions. The declaration did not call for new interim President Assimi Goita to step down. The army colonel, who led the August coup as well as last week’s revolt, was declared president on Friday.

The statement from ECOWAS said the head of the transition government, the vice president and the prime minister should not under any circumstances be candidates in the planned presidential election. “The date of 27th February 2022 already announced for the presidential election should be absolutely maintained,” it said.

There was no immediate response from Goita, who was present at the summit.

On Monday, soldiers detained transitional President Bah Ndaw and Prime Minister Moctar Ouane, releasing them on Thursday while saying that they had resigned. The twin arrests triggered a diplomatic uproar and marked Mali's second apparent coup within a year.

In a statement, ECOWAS condemned the arrests, saying the move violated mediation steps taken since the August coup. The bloc demanded that the Malian authorities immediately release the pair. It also highlighted “strong and deep concerns over the present crisis in Mali,” which it noted “is coming halfway to the end of the agreed transition period, in the context of the security challenges related to incessant terrorist attacks and the COVID-19 Pandemic with its dire socio-economic impacts.”

The United Nations and the African Union (AU) have also condemned the power grab. The U.N. Security Council has said the resignations of Ndaw and Ouane were forced, while the United States has already pulled its security force support.

With the junta going back on its previous commitment to civilian political leaders, doubts have been raised about its other pledges, including a promise to hold elections in early 2022. The junta said this week it would continue to respect that timetable, but added that it could be subject to change.

ECOWAS issued sanctions against Mali after the August coup before lifting them when the transitional government was put in place. The 15-nation bloc had warned of reimposing sanctions on the country, as have the United States and former colonial power France.

French leader Emmanuel Macron said in an interview with the Journal du Dimanche newspaper published Sunday that Paris "could not stay by the side of a country where there is no longer democratic legitimacy or a transition.". He warned that France would pull its troops out of Mali if the country lurches towards radicalism under Goita's leadership.

France has around 5,100 troops in the region under its anti-extremist operation Barkhane, which spans five countries in the Sahel – Burkina Faso, Chad, Mali, Mauritania and Niger. Also on Sunday, underscoring Mali's chronic instability, suspected terrorists killed four civilians and a police officer in southern Mali, a region that has previously been mostly spared from the country's extremist unrest, a security official said on condition of anonymity. The unidentified men attacked a checkpoint near the town of Bougouni, around 100 kilometers (60 miles) from Mali's borders with the Ivory Coast and Guinea, before dawn, the official said. A local lawmaker confirmed the attack.

Mali is among the world's poorest countries and the previous ECOWAS sanctions have hit the country hard.