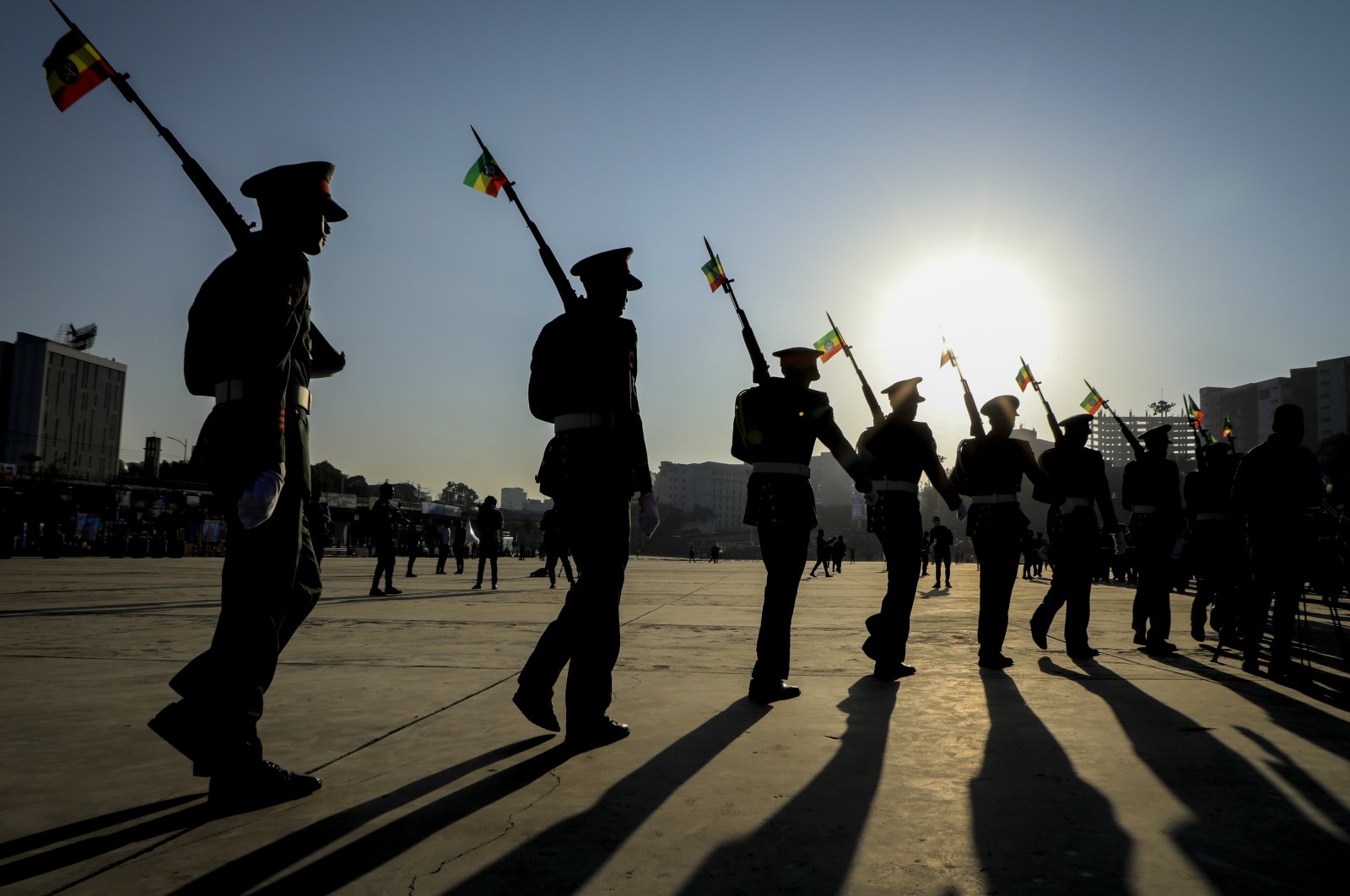 Ethiopian military parade with national flags attached to their rifles at a rally organized by local authorities to show support for the Ethiopian National Defense Force (ENDF), at Meskel square in downtown Addis Ababa, Ethiopia, Nov. 7, 2021. (AP Photo)
by Agencies Nov 10, 2021 10:53 am

More than 70 drivers and some 16 local staff working with the U.N. have been arrested by Ethiopian authorities, while human rights organizations sound the alarm over widespread atrocities in the country's Amhara region in the latest disturbing claim from the war

The United Nations said Wednesday that Ethiopia had detained 72 drivers working for the World Food Programme (WFP) in a northern city along the only functional road leading into the famine-threatened Tigray region.

"We confirm that 72 outsourced drivers contracted by WFP have been detained in Semera. We are liaising with the Government of Ethiopia to understand the reasons behind their detention," a U.N. spokesperson said. "We are advocating with the government to ensure their safety and the full protection of their legal and human rights."

The ethnicity of the drivers was not clear. The state-appointed Ethiopian Human Rights Commission said on Sunday it had received many reports of arrests of Tigrayans in the capital. Ethiopian government spokesperson Legesse Tulu and Foreign Affairs Ministry spokesperson Dina Mufti did not immediately respond to a request for comment.

The detentions in Addis Ababa followed the declaration of a six-month nationwide state of emergency last week after Tigrayans and the Oromo Liberation Army (OLA) claimed major advances on the ground, raising fears of a march on the capital.

Some U.N. staff members were taken from their homes, humanitarian sources said, shortly after a senior U.N. envoy visited Tigray to plead for more aid for civilians. Sixteen U.N. staffers, all Ethiopian nationals, remained in detention while another six were freed, U.N. spokesperson Stephane Dujarric told reporters at the world body's headquarters.

"We are of course actively working with the government of Ethiopia to secure their immediate release," Dujarric said, according to Agence France-Presse (AFP). "There has been, as far as I know, no explanation given to us on why these staff members are detained."

Lawyers say arbitrary detentions of ethnic Tigrayans – commonplace during the war – have spiked in the last week, ensnaring thousands, with the new measures allowing the authorities to hold anyone suspected of supporting "terrorist groups" without a warrant.

The war, which has ravaged northern Ethiopia since November 2020, has been punctuated by accounts of massacres and mass rapes, with thousands of people killed and 2 million displaced.

In a report Wednesday, Human Rights Watch (HRW) said that the Ethiopian government's "effective siege" of Tigray is preventing victims of rape committed by warring parties during the yearlong conflict from getting access to health care. The HRW claims coincided with a report by fellow campaign group Amnesty International that said Tigrayan rebels raped, robbed and beat up women during an attack on a town in Ethiopia's Amhara region, the latest disturbing testimony from the war.

"The government's effective siege of Tigray since June is doubly victimizing survivors" by denying them critical medical and psychological care, it said.

"Not only have Tigrayan women and girls experienced horrific abuses, they are confronting shortages of food, medicine and other desperately needed support to rebuild their lives."

The report on Wednesday focused on assaults during an August offensive by the Tigray People's Liberation Front (TPLF), with 14 of the 16 women interviewed telling Amnesty they were gang-raped by the rebels, in some cases at gunpoint and with their children watching.

"The testimonies we heard from survivors describe despicable acts by TPLF fighters that amount to war crimes and potentially crimes against humanity," said Amnesty's secretary-general, Agnes Callamard. "They defy morality or any iota of humanity."

Many of the rapists used ethnic slurs against their victims, with a 28-year-old mother of two telling Amnesty that one of the four men who assaulted her called her a donkey while her daughter watched.

"He was saying: 'Amhara is a donkey, Amhara has massacred our people, the Federal Defense forces have raped my wife, now we can rape you as we want.'"

Another woman told Amnesty she fell unconscious after TPLF fighters raped her and beat her, using the butts of their guns. The men also stole her jewelry after assaulting her, she said.

The rights group said the vast majority of the women interviewed were suffering from health problems as a result of the sexual assaults but were unable to get the help they needed after Nifas Mewcha hospital was damaged in the TPLF offensive.

A joint investigation by the office of U.N. rights chief Michelle Bachelet and the Ethiopian Human Rights Commission published last week found evidence of "serious abuses" by all sides in the conflict, saying some of the violations may amount to crimes against humanity.

Tensions between the Ethiopian government and the U.N. have been high throughout the war. In September, Ethiopia's Foreign Ministry announced it was expelling seven senior U.N. officials for "meddling" in the country's affairs. U.N. emergency relief coordinator Martin Griffiths on Tuesday called for peace following a weekend visit to Tigray's regional capital Mekele where he met leaders from TPLF rebel group.

Former Nigerian President Olusegun Obasanjo has been leading mediation efforts for the African Union (AU). He met with Jeffrey Feltman, a U.S. envoy in Addis Ababa.

Briefing the AU's 15-member security body on Monday, Obasanjo expressed optimism that progress was in the offing.

"All these leaders here in Addis Ababa and in the north agree individually that the differences opposing them are political and require political solution through dialogue," he said in a copy of his statement seen by Agence France-Presse (AFP). "This, therefore, constitutes a window of opportunity that we can collectively tap."

Price said Tuesday that the United States believes the window of opportunity "does exist and continues to exist."

The TPLF and its allies, OLA, have claimed several victories in recent weeks, taking towns about 400 kilometers (250 miles) from the capital, and they have not ruled out marching on Addis Ababa.

The government says the rebels are greatly exaggerating their gains but has ordered the capital to prepare to defend itself. Much of the conflict-affected zone is under a communications blackout and access for journalists is restricted, making battlefield claims difficult to verify. Nevertheless, a number of countries have urged their citizens to leave Ethiopia while commercial flights are still available.

The U.S. Embassy has also ordered nonessential staff to leave and the U.N. has suspended nonessential missions to Addis Ababa. Britain on Tuesday advised nationals to leave Ethiopia, citing a deteriorating security situation.

Prime Minister Abiy Ahmed sent troops into Tigray in November 2020 to topple the TPLF, the former regional ruling party that dominated national politics before Abiy took over in 2018. Winner of the 2019 Nobel Peace Prize, Abiy promised a swift victory but by June the TPLF had retaken most of Tigray before expanding into the neighboring regions of Amhara and Afar.