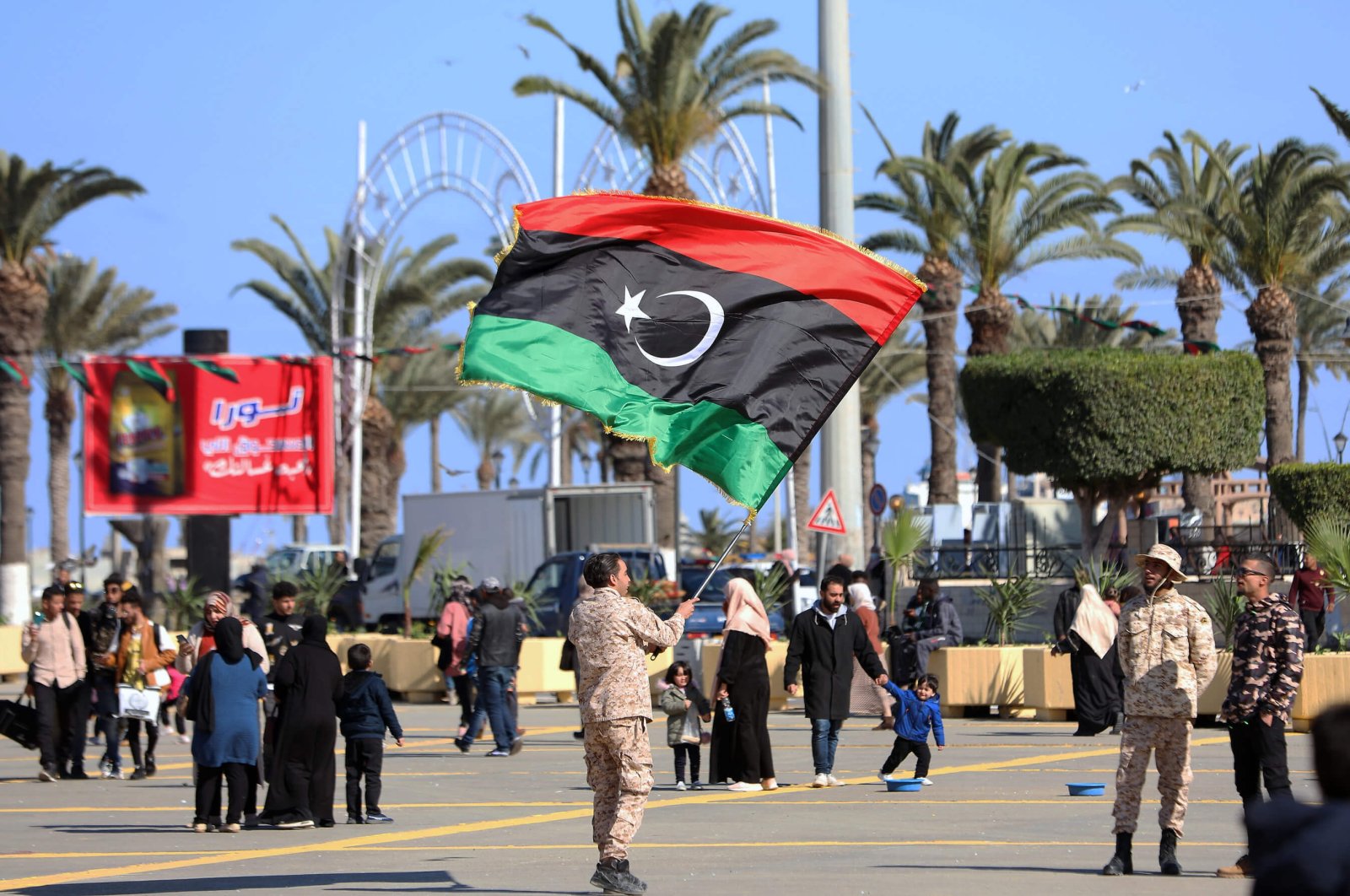 A soldier waves the Libyan flag a day ahead of the 10th anniversary of the country’s Arab Spring uprising in Martyrs’ Square, Tripoli, Libya. (AA Photo)
by DAILY SABAH WITH AGENCIES Feb 17, 2021 11:03 am
RECOMMENDED

Libyans on Wednesday marked the 10th anniversary of their 2011 uprising that led to the overthrow and eventual killing of longtime dictator Moammar Gadhafi, while the head of Libya’s Presidency Council arrived in the capital Tripoli for his first visit since being elected.

The day comes as Libyans watch their recently appointed government tasked with leading the country through elections late this year.

On Sunday, the head of the Presidential Council of Libya, Fayez Sarraj, flew overseas and left his first deputy Ahmed Maiteeq in charge of affairs. Details about where Sarraj headed and his date of return have not been disclosed.

There was no statement by Menfi on the details of his visit to Tripoli, but the newly elected leader has visited four cities in the nation's east since his election: Benghazi, Tobruk, Al-Bayda and Al-Quba.

During his visit to Benghazi, Menfi promised that his tenure would mark the beginning of “the journey of work for the sake of the nation, its unity and its territorial integrity and the reunification of our people throughout Libya.”

Upon his arrival Friday in Tobruk, Menfi pledged to advance national reconciliation and unify the country’s military establishment.

In Al-Bayda, he met with a number of parliamentarians representing the city as well as other local officials.

Menfi also met with the speaker of the pro-Haftar assembly, Aguila Saleh, during his visit to Al-Quba to discuss “creating conditions for granting confidence to the government.”

On Feb. 5, the country’s rival political factions, sponsored by the United Nations, agreed to form an interim unity government to lead Libya in its transition phase. The group selected – with Dbeibeh, a pragmatic and well-connected businessperson from the western city of Misrata, as prime minister and the three-person Presidency Council made up of Menfi, a Libyan diplomat from the country’s east who hails from the tribe of anti-colonial hero Omar al-Mukhtar; Al-Lafi and Mossa Al-Koni – will remain until elections scheduled for Dec. 24.

A child killed in celebrations

Meanwhile, celebrations began late Tuesday in the capital where people gathered in Tripoli's main square amid tight security. The city’s main streets and squares were cleaned and decorated with banners and photos marking the anniversary. Festivities also rang out in other cities in the south.

Hassan Wanis, head of the general authority for culture in Tripoli, said celebrations and commemorative events were planned in the three regions of old Libya: Tripolitania in the west, Cyrenaica in the east and Fezzan in the southwest.

However, the festive atmosphere did not last for long as a child was killed when a shell struck a group of people celebrating in the southern city of Sabha, according to a Libyan spokesman.

Al-Wafi called the attack a "heinous crime," saying that local authorities have launched an investigation into the shelling.

Libya became one of the world's most intractable conflict zones after the Arab Spring a decade ago. In the years that followed Gadhafi’s ouster, the North African country descended into devastating chaos, becoming a haven for militants and armed groups that survive on looting and human trafficking.

The oil-rich country has for years split between rival administrations: a U.N.-backed government in Tripoli, a city largely controlled by an array of armed factions, against the eastern administration led by Haftar.

Over the past years, the country has seen devastating bouts of violence. The latest began in April 2019 when Haftar – backed by the United Arab Emirates (UAE), Egypt and Russia – launched an offensive seeking to capture Tripoli. His campaign collapsed after Turkey stepped up its military support for Sarraj's administration.

Months of U.N.-led talks resulted in a deal in October that ceased hostilities and called for the withdrawal of all foreign forces and mercenaries in three months and adherence to a U.N. arms embargo, provisions that have not yet been met.

Dbeibah is still consulting to form his Cabinet, which needs confirmation from the country’s divided parliament. After Menfi arrived in Tripoli on Tuesday, he met with Dbeibah and other officials.

In a report marking the anniversary, Amnesty International repeated its calls for holding accountable those engaged in alleged war crimes and serious human rights violations during the past 10 years.

“Unless those responsible for violations are brought to justice, rather than rewarded with positions of power, the violence, chaos, systematic human rights abuses and endless suffering of civilians that have characterized post-Gadhafi Libya will continue unabated,” said Diana Eltahawy, the group’s deputy director for the Middle East North Africa (MENA).

In years past, Libya emerged as the dominant transit point for migrants fleeing war and poverty in Africa and the Middle East. Traffickers often pack desperate families into ill-equipped rubber boats that stall and flounder along the perilous Mediterranean route. Thousands drown along the way, while others end up detained in squalid smugglers’ pens or crowded detention centers if captured by authorities.

United Nations Secretary-General Antonio Guterres called for all foreign troops and mercenaries to leave war-torn Libya during a meeting with the country's newly appointed leader Tuesday, his spokesperson said.

“In his calls, the secretary-general stressed the U.N.’s support to Libya’s elections, the monitoring of the cease-fire and the need for the withdrawal of foreign forces,” he said.

In December, the United Nations reported that there were around 20,000 foreign troops and mercenaries deployed inside Libya. Asked if the world body had noticed any start of a withdrawal of foreign forces, Dujarric said the U.N. was not aware of a pullout.

“I have not gotten to hear any updates on foreign troops leaving. We want that to happen, obviously as soon as possible,” he said.

Guterres congratulated Menfi and Dbeibah on their new appointments and highlighted the importance of ensuring that the new executive authority works toward holding national elections on Dec. 24, 2021.

Dujarric said all three agreed on the necessity of foreign troops leaving the country as part of a cease-fire deal.

In the meantime, Ankara's Ambassador to Tripoli, Serhat Aksen, met Tuesday with the new U.N. Special Envoy to Libya Jan Kubis, with the Turkish envoy reaffirming Turkey's full support for the new mission.

Aksen and Kubis discussed efforts for the approval of the new government and exchanged views on ways to ensure stability in Libya during the meeting at the Turkish Embassy in Tripoli, according to a statement by the Turkish Embassy.

U.N. chief Antonio Guterres announced Jan. 18 the start of Kubis' duties as his special envoy and head of the U.N. Support Mission in Libya (UNSMIL) beginning in early February.