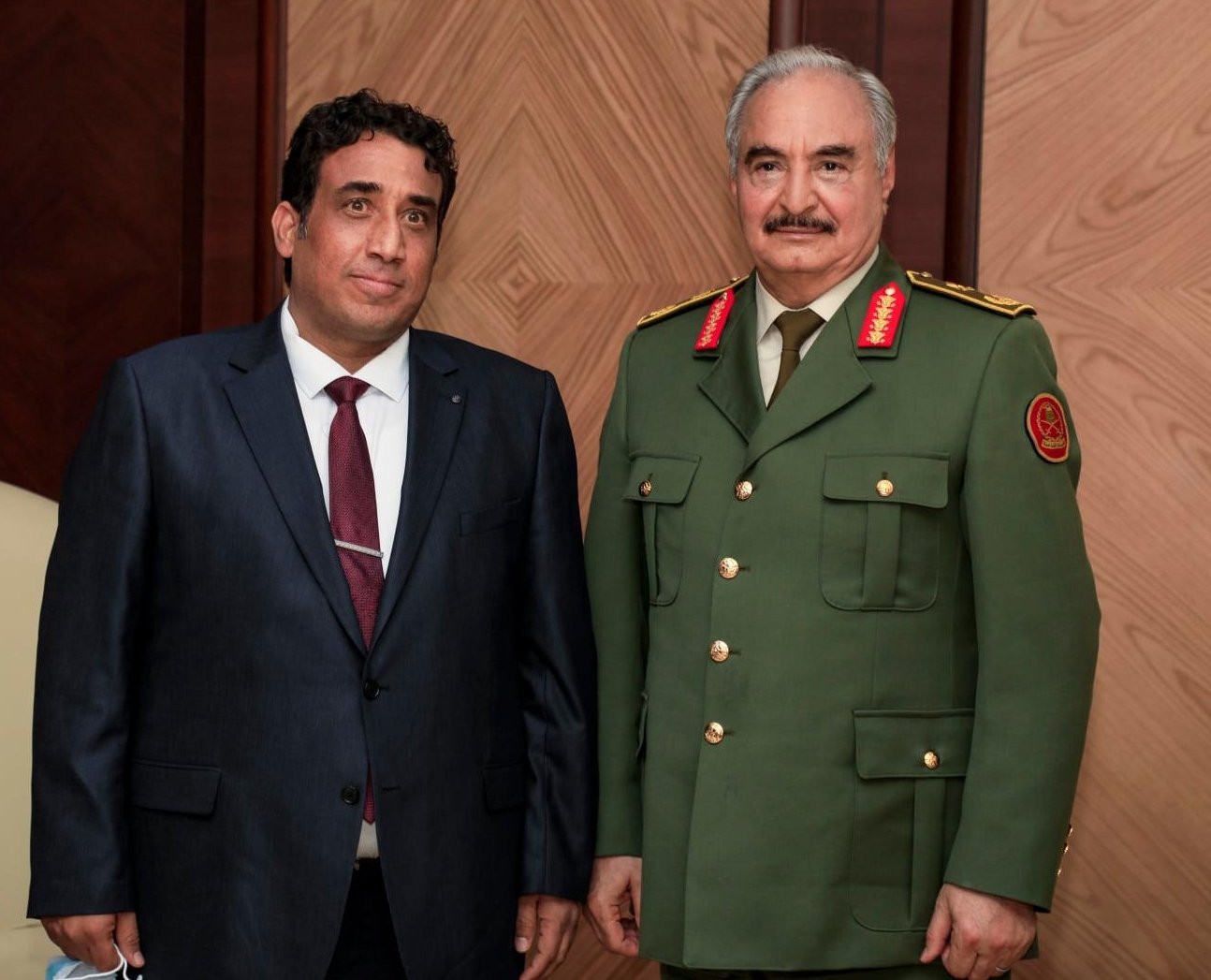 The president of Libya's recently elected transitional government, Mohammed Menfi, arrived in eastern Benghazi Thursday to promote national unity ahead of the elections in December.

Menfi, Tripoli's former ambassador to Greece, arrived from Athens, where he had been living for the past three years, and immediately met with dozens of tribal elders, academics and activists inside the VIP lounge at Benina airport, which serves Benghazi.

Born in the eastern city of Tobruk in 1976, Menfi last visited Benghazi in 2016, according to sources speaking to Deutsche Presse-Agentur (dpa) in the city.

“Our objective is to achieve unity and true reconciliation and to collaborate with all in order to end the suffering,” Menfi tweeted shortly before his arrival. After leaving the airport, he met with putschist Gen. Khalifa Haftar at his forces' headquarters in the village of Rajma, 27 kilometers (17 miles) east of Benghazi.

Menfi's visit comes a week after delegates from Libya's rival factions elected him as head of a three-member Presidency Council, that includes Abdul-Hamid Mohammed Dbeibeh as interim prime minister, in a United Nations-hosted process in Switzerland. Following the Feb. 5 decision, Libya can now look to its new interim government to lead during its transition phase until the December elections, ending a decade of chaos in the post-Moammar Gadhafi era.

During the meeting, Haftar stated his backing of the new transitional authorities and his support for a “peaceful and democratic alternation of power” in Libya, according to a statement released by his office.

Haftar had already welcomed the appointment of the new government, hailing its leaders as “national figures.” Although Menfi comes originally from Tobruk, some observers argued that he is politically allied to western factions, which may undermine the transitional authorities' ability to represent the political interests of the east.

Menfi had served for almost a year as Libya's ambassador in Greece before Athens ordered his expulsion in December 2019 following a maritime agreement between Tripoli and Ankara. He remained in Greece with his family but without diplomatic status.

Turkey and Libya signed agreements on security and maritime borders in 2019. The maritime deal enabled Ankara to secure its rights in the Mediterranean while preventing any fait accompli by other regional states but Athens, one of the main Mediterranean actors, did not welcome the agreement. Greece regarded it as a violation of its rights, though international law proves otherwise.

As part of the military agreements, the Turkish Armed Forces (TSK) has been training the Libyan Army. The exercises, designed to bring the Libyan Army up to international standards, is being held in the nation's Tajoura Joint Land Training and Exercise Center.

On Thursday, Presidential Spokesperson Ibrahim Kalın during an interview with state broadcaster TRT Haber stated that Turkish troops stationed in Libya will remain there as long as the bilateral military agreement between Ankara and Tripoli is active and Libya's government requests it.

President Recep Tayyip Erdoğan said Tuesday that Turkey would discuss withdrawing its troops if other foreign powers are withdrawn first.

International mercenaries and arms have poured into the country since Haftar launched his offensive, with Russia and the United Arab Emirates (UAE) serving as the putschist general's top suppliers. According to the U.N., there are currently 20,000 foreign fighters and mercenaries left in Libya.

The mercenaries remain in Libya despite the January deadline passing for their departure that was agreed upon under the October cease-fire.

Meanwhile, Foreign Minister Mevlüt Çavuşoğlu spoke over the phone with the United Nation's special envoy to Libya, Jan Kubis, and discussed the new developments in the country.

Since 2015, Libya has been divided between two governments, one in the east and another in the west. In April 2019, warlord Haftar, a military commander allied with the eastern government, launched an offensive to seize the capital, Tripoli. His campaign failed after 14 months of fighting and last October, the U.N. convinced both parties to sign a cease-fire agreement and embark on a political dialogue.

Each member of the three-man council represents a region of old Libya: Tripolitania in the west, Cyrenaica in the east and Fezzan in the southwest. The appointment of an interim government capped months of U.N.-brokered talks that resulted in an agreement to hold elections on Dec. 24.

The Libyan Constitutional Committee agreed on conducting parliamentary and presidential elections in the war-torn country in case the constitutional referendum cannot be held, a committee member said Friday.

Omar Boshah was quoted by Libyan Alahrar TV as saying that they will hold elections if a popular referendum on a new constitution cannot be held.

Three days of meetings for Libya's constitutional track kicked off Tuesday in Egypt's Red Sea resort of Hurghada. This was the third round of talks.

In a previous January meeting, the committee agreed the new constitution may be approved with a simple majority exceeding 50% of the votes.

The committee consists of 10 members of both Libya's High Council of State and the Tobruk-based House of Representatives.