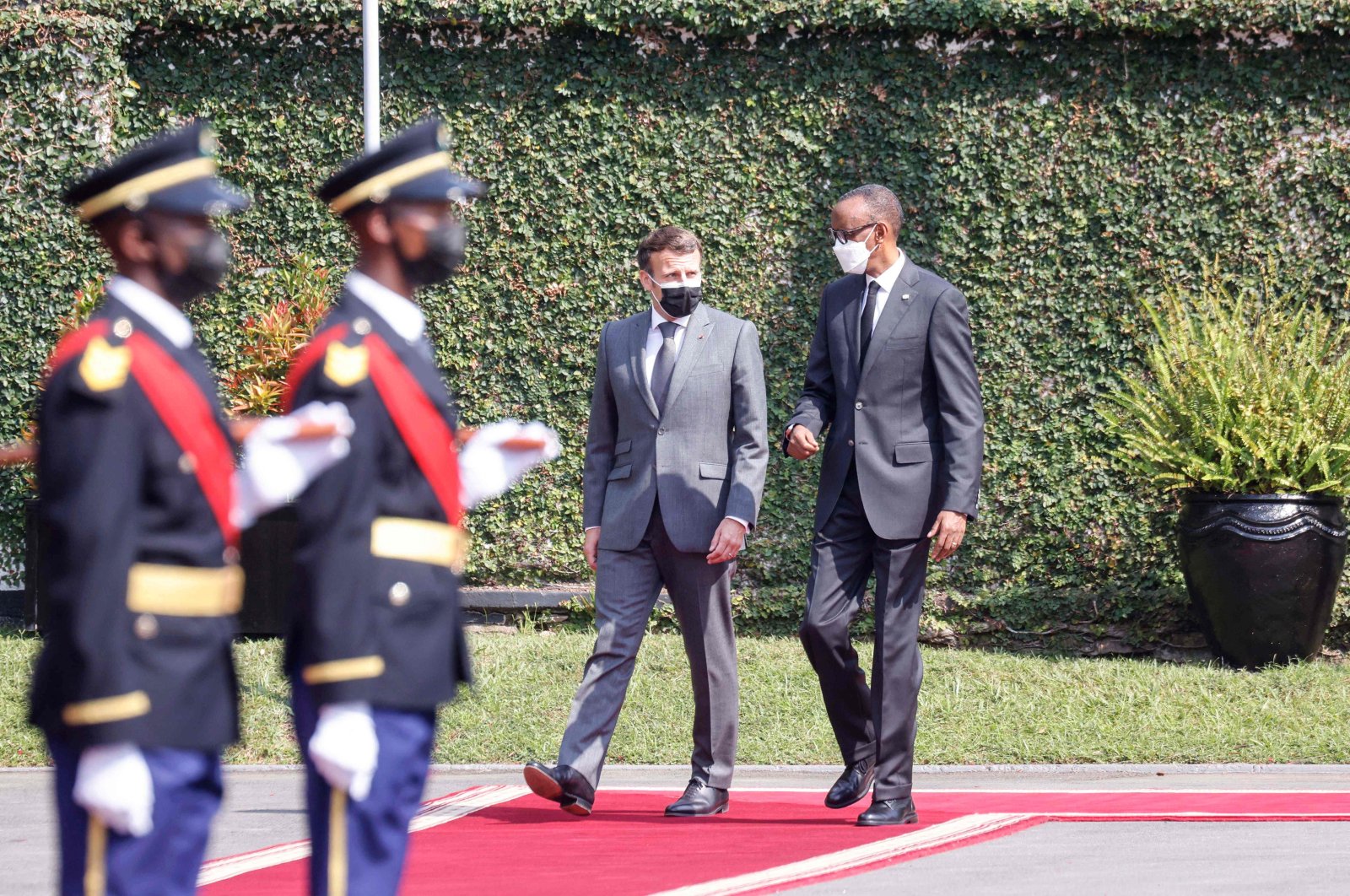 France continued to arm criminals in Rwanda in the aftermath of the 1994 genocide that killed 800,000 in the country. Families of the victims say Macron's comments lack a 'clear apology'

Rwanda's main genocide survivor group said Thursday it was disappointed that French President Emmanuel Macron did not "present a clear apology" for France's role in the 1994 genocide during his visit to Rwanda.

Egide Nkuranga, president of the Ibuka association, said Macron did not "ask forgiveness," according to remarks carried by Agence France-Presse (AFP). But he "really tried to explain the genocide, how it happened, what they didn't do, their responsibilities ... It's very important, it shows that he understands us."

Macron visited Kigali Thursday, hoping to reset ties between the two nations after decades of Rwandan accusations that France was complicit in the 1994 genocide which left hundreds of thousands of people dead. Many accused the French government of turning a blind eye to massacres that were taking place in Rwanda while under France's control as well as French authorities supplying the brutal regime.

The streets of Kigali were quiet Thursday, with none of the banners or flags that usually accompany a high-level visit. In a key speech on his visit, Macron said he recognizes that France bears a heavy responsibility for the 1994 genocide. Macron solemnly detailed how France had failed the 800,000 victims of the genocide but he stopped short of an apology.

France "was not an accomplice” in the genocide but ended up siding with Rwanda's "genocidal regime" and bore an "overwhelming responsibility” in the slide toward the massacres, the French leader said, speaking Thursday at the genocide memorial in the capital, Kigali.

"France has a role, a history and a political responsibility in Rwanda. It has a duty: That of looking history in the face and recognizing the suffering that it inflicted on the Rwandan people by favoring silence over the examination of truth for too long,” Macron said. When the genocide started, "the international community took close to three months, three interminable months, before reacting and we, all of us, abandoned hundreds of thousands of victims.” France’s failures contributed to "27 years of bitter distance” between the two countries, he said. "I have come to recognize our responsibilities,” Macron said.

"Only those who went through that night can perhaps forgive, and in doing so give the gift of forgiveness," Macron said at the Gisozi genocide memorial in Kigali, where more than 250,000 victims are buried. "I hereby humbly and with respect stand by your side today, I come to recognize the extent of our responsibilities."

Before Macron's visit many Rwandans said they were hoping for a full apology.

"I wish he could ask forgiveness for what France did during 1994," said Henriette Uwase, a 28-year-old street vendor selling mangoes, who was 2 years old when her father and two brothers were killed. Many Rwandans had been angered because perpetrators of the genocide had been able to live abroad, said Alain Gauthier, who pursues such individuals with his Rwandan wife, a Tutsi who lost her mother and other relatives.

"We are waiting for one thing and that is an apology," he said, according to Reuters. "Those who committed genocide and live pleasantly in France (must) be tried."

"Many people say that he will not apologize but I don’t see how Macron comes to Rwanda and leaves without apologizing for France’s role."

The visit follows the release in March of a report by a French inquiry panel that said a colonial attitude had blinded French officials and the government bore a "serious and overwhelming" responsibility for not foreseeing the slaughter. However, the report absolved France of direct complicity in the killings of more than 800,000 Tutsis and moderate Hutus. Rwandan President Paul Kagame, who has previously said France participated in the genocide, said last week that the report "meant a lot" to Rwandans.

Rwandans could "maybe not forget, but forgive," France for its role, said Kagame, a Tutsi and the main power in Rwandan politics since his rebel army ended the killings by death squads loyal to the Hutu-led government. Macron, who also has pointedly tried to distance France from its colonial past, agreed in April to open the Rwanda archives of former president Francois Mitterrand, who was in charge during the genocide.

Shortly afterward Rwanda released its own report that found France was aware a genocide was being prepared and bore responsibility for enabling it, continuing in its unwavering support for Rwanda's then-President Juvenal Habyarimana. It was the shooting down of Habyarimana's plane, killing the president, which unleashed the 100-day frenzy of killings. "French officials armed, advised, trained, equipped and protected the Rwandan government," the report concluded. France then proceeded to cover up its role for years, the report said.

Although Macron did not apologize, he won praise from Kagame for his "powerful speech.” "His words were something more valuable than an apology, they were the truth,” Kagame said. "This was an act of tremendous courage.” Kagame and Macron both signaled that a page had been turned in France-Rwanda ties. "This visit is about the future, not the past,” Kagame said, adding that he and Macron discussed a range of issues, including investment and support for businesses. Macron said they were opening "a new page.”

Appearing to explain his lack of apology, Macron said, "A genocide cannot be excused, one lives with it.” Macron said that he had come with 100,000 COVID-19 vaccines for Rwanda.

On Friday, the Elysee Palace said Macron would name a new ambassador to Rwanda, the first accredited French envoy since 2015. The previous visit, by Nicolas Sarkozy in 2010, was the first by a French leader after the 1994 massacre sent relations into a tailspin.

Rwanda's government and genocide survivor organizations often accused France of training and arming militias and former government troops who led the genocide. Kagame, who has been Rwanda's de facto leader since 1994 and its president since 2000, has won praise abroad for restoring order and making advances in economic development and health care. But rights watchdogs, dissidents and others accuse Kagame of harsh rule.

Francois Graner, research director at the National Center for Scientific Research (CNRS) at Paris Diderot University, has been researching official archives on France’s role in the genocide. In an interview with Anadolu Agency (AA), Graner said French policy is to keep Rwanda under its influence.

"All of the archives confirm France's support for the Hutus. French officials were informed that there were preparations for genocide,” he said.

France supported the Hutus not only during the genocide, but also before and after, said Graner, who is also part of the group Survie (Survive in English), a nongovernmental organization (NGO) which denounces all forms of French neocolonialist intervention in Africa.

“France also gave intense military support to keep the regime alive. This military support was in the form of military training and weapons supply before the genocide. Arms support continued secretly during and after the genocide,” he added. Graner said that "French soldiers and mercenaries" who were in Rwanda in 1994 might have participated in the attack against Habyarimana and that this should also be investigated.

“Archives show that in January 1994, France sent arms to Rwanda when Rwanda was supposed to be disarmed, but the United Nations seized these weapons,” he added.