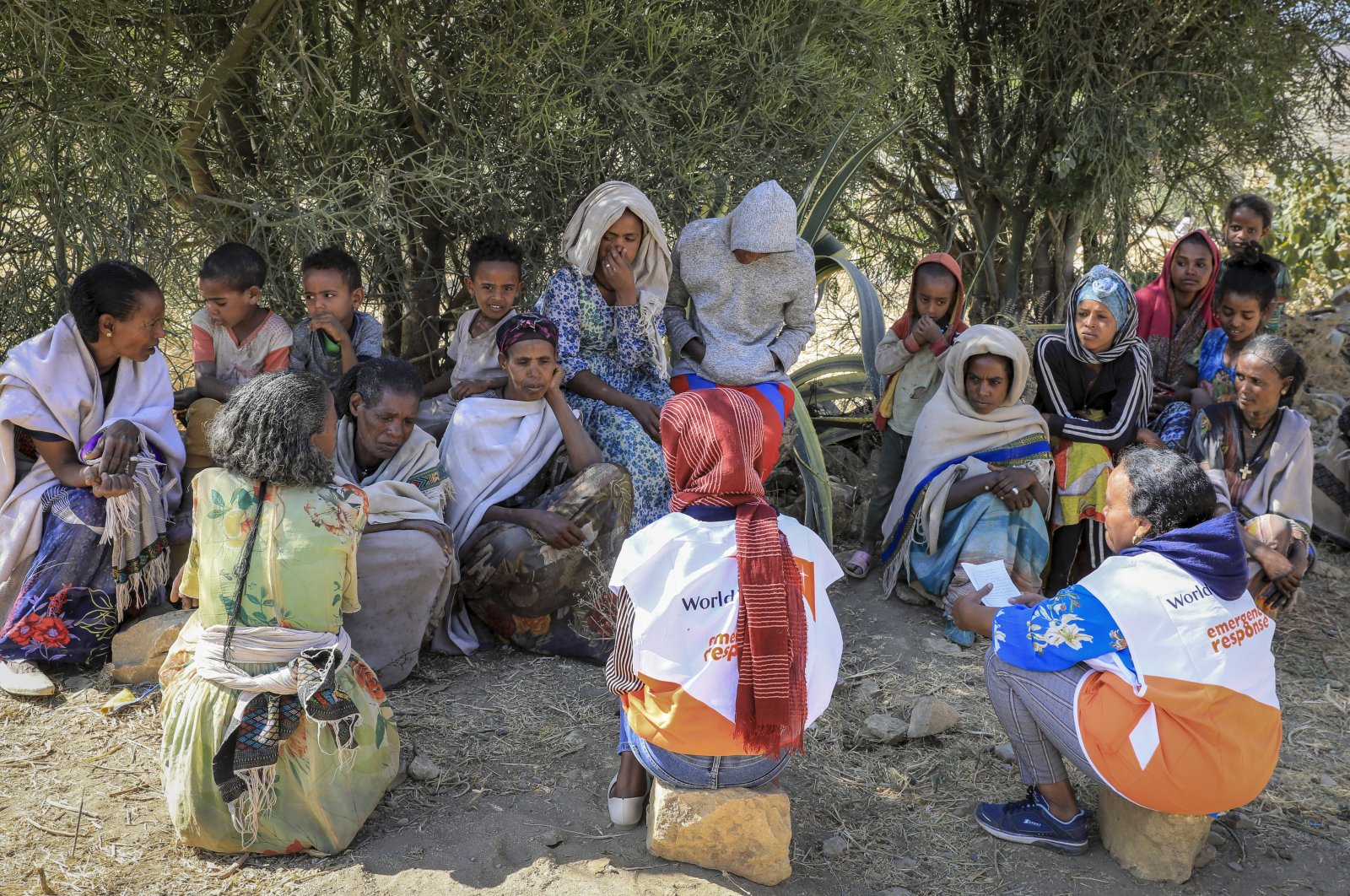 Displaced people speak to a community assessment team from World Vision, in the Enderta district of the Tigray region of northern Ethiopia, Jan. 15, 2021. (AP Photo)
by Agencies Feb 11, 2021 12:39 pm

Rare eyewitness accounts shed light on the aftermath of the dark conflict in Tigray, as 80% of the region is cut off from humanitarian assistance, with the Ethiopian Red Cross warning that tens of thousands could starve to death

As soldiers from Eritrea looted the border town of Rama in Ethiopia’s Tigray region, one home became a dispensary for frightened residents seeking medicine in the midst of war. In return, they shared details of killings in nearby communities. An American nurse visiting her family listened in shock. Now, after escaping to her home in the U.S. state of Colorado, she struggled to estimate the number of dead.

"I don’t know, 1,000?” she told The Associated Press (AP). "It was a lot, just in the rural areas.” She has been unable to reach her parents since leaving. If the fighting doesn't end soon, she said, "we'll be left without families."

Rare witness accounts are illuminating the toll of the shadowy conflict in Tigray, which is largely cut off from the world as fighting enters a fourth month in a region of 6 million people. Ethiopian forces and allied fighters pursue the fugitive former leaders of Tigray who long dominated Ethiopia’s government.

Each side sees the other as illegitimate after last year's national elections were delayed and Tigray defiantly held its own. Soldiers from neighboring Eritrea, a secretive nation and enemy of the former Tigray leaders, are deeply involved, though Ethiopia and Eritrea deny their presence.

The European Union this week joined the U.S. in urging Eritrea to withdraw its forces, asserting they are "reportedly committing atrocities and exacerbating ethnic violence.” With journalists barred, communications patchy and the international community unable to investigate atrocities firsthand, it is challenging to verify witness accounts.

But their details are consistent with others who describe a region where the health system is largely destroyed and vast rural areas remain out of reach. Red Cross officials warn that thousands of people could starve to death, highlighting that 80% of the Tigray region has been cut off from humanitarian assistance.

"Eighty percent of the Tigray is unreachable at this particular time," the president of the Ethiopian Red Cross Society, Abera Tola, told a news conference Wednesday, as reported by Agence France-Presse (AFP). Some starvation deaths have already been reported and the figures could climb fast, he added.

"The number today could be one, two or three, but you know after a month it means thousands. After two months it will be tens of thousands," Tola said, adding that aid access remained largely restricted to main roads north and south of Mekele, excluding most rural areas. Displaced civilians who have managed to reach camps in Tigrayan towns are "emaciated," he said.

The Ethiopian Red Cross now estimates that around 3.8 million of Tigray's roughly 6 million people need humanitarian assistance, up from an earlier estimate of 2.4 million. The government has said it is working with the U.N. and international organizations to grant greater aid access as the security situation allows.

Once Tigray reopens to scrutiny, people will be shocked, said Hailu Kebede, foreign affairs head for the Salsay Woyane Tigray opposition party that, along with two others, estimates more than 52,000 civilians have died. He told the AP they have attempted to collect data from witnesses in every administrative area of the region.

"We have thousands of names,” said Hailu, who spent weeks hiding on the outskirts of the Tigray capital, Mekele, listening to bombardment and gunfire. He said one relative was killed. "This is the least-documented war," Hailu said. "The world will apologize to the people of Tigray, but it will be too late.”

Even as the delivery of aid slowly begins to improve, it is questioned. One woman from Tigray, a student in Europe, asserted that Ethiopian authorities have begun arriving in her family's border-area village with badly needed food but are withholding it from families suspected of links to Tigray fighters. She is not the first to make that claim.

"If you don’t bring your father, your brothers, you don’t get the aid, you’ll starve,” she recounted after speaking with her sister about events in the Irob administrative area. Like others, she spoke on condition of anonymity out of fear for her family. A spokesperson for Prime Minister Abiy Ahmed, Billene Seyoum, and the official overseeing Tigray's state of emergency, Redwan Hussein, didn't respond to questions.

The student also learned that her uncle and two nephews were killed by Eritrean soldiers during a recent holiday gathering. The Irob Advocacy Association, relying on witnesses who have reached cities with phone service, has listed 59 victims overall. "I’m so ashamed of my government,” the student said, starting to cry. Like many in the diaspora, she scours social media for information. "I worry if somebody from my family dies, I will learn about it from Facebook."

People who have contacted the outside world are frustrated by how little it knows about the conflict.

"The north is dying,” said a man from Irob who reached Mekele last month. "I strongly believe there is a campaign to target the people. Every public and private institution is looted.” The north is occupied by Eritrean soldiers, he said. That's confirmed even by Tigray's new interim government, the Ethiopian Human Rights Commission said in a statement Thursday.

The woman who left Rama for the U.S. described an uneasy world where Ethiopian and Eritrean soldiers both appeared to be in charge. Eritrean soldiers came to her family’s home multiple times to sack it, she said. At first, they sought jewelry, cell phones and money. Later they took whatever they could find.

"If they found a spoon, they even took the spoon,” she said. Some soldiers acknowledged they were from Eritrea, she said, and they assumed that everyone in Tigray received military training as they did in what human rights groups call one of the world's most repressive states.

For two and a half months, she hid indoors like many Tigray residents, scared of being raped, shot "for no reason” or, like her brother, beaten.

The soldiers said they had come for "Debretsion,” the fugitive regional leader. She could tell which towns in Tigray were being looted from the names written on vehicles, even ambulances, driven through Rama on their way into Eritrea, 7 kilometers (4.3 miles) away. She finally left when her mother declared, "You’re not going to die here.”

She walked for 11 hours on rural paths to the town of Adwa, then found transport to Mekele. Ethiopian soldiers manned some checkpoints, she said, and Eritrean soldiers manned others. "On the way, you could see a lot of buildings were destroyed,” she said. "You couldn’t see anybody in cities, it was all quiet.”

In Mekele, despite showing her U.S. passport, she was asked for her local identity card. "I was like, I don’t live here, I’m a U.S. citizen,” she said, her voice starting to shake. "I was so scared.” Like other ethnic Tigrayans trying to fly out of Ethiopia’s capital, Addis Ababa, she was questioned and feared she would be unable to board. She arrived in the U.S. last month.

Others from Tigray who have reached Addis Ababa but hold no foreign passport are trying to hide their ethnic background amid reports of arrests and harassment. "I’m in the middle of Ethiopia and I can’t go anywhere,” said Danait, who came from Mekele and gave only her first name out of concern for relatives in Axum, Shire and other Tigray towns that she still cannot reach by phone. "No, I don’t feel safe.”