People in Libya's Tarhuna await justice after reign of terror 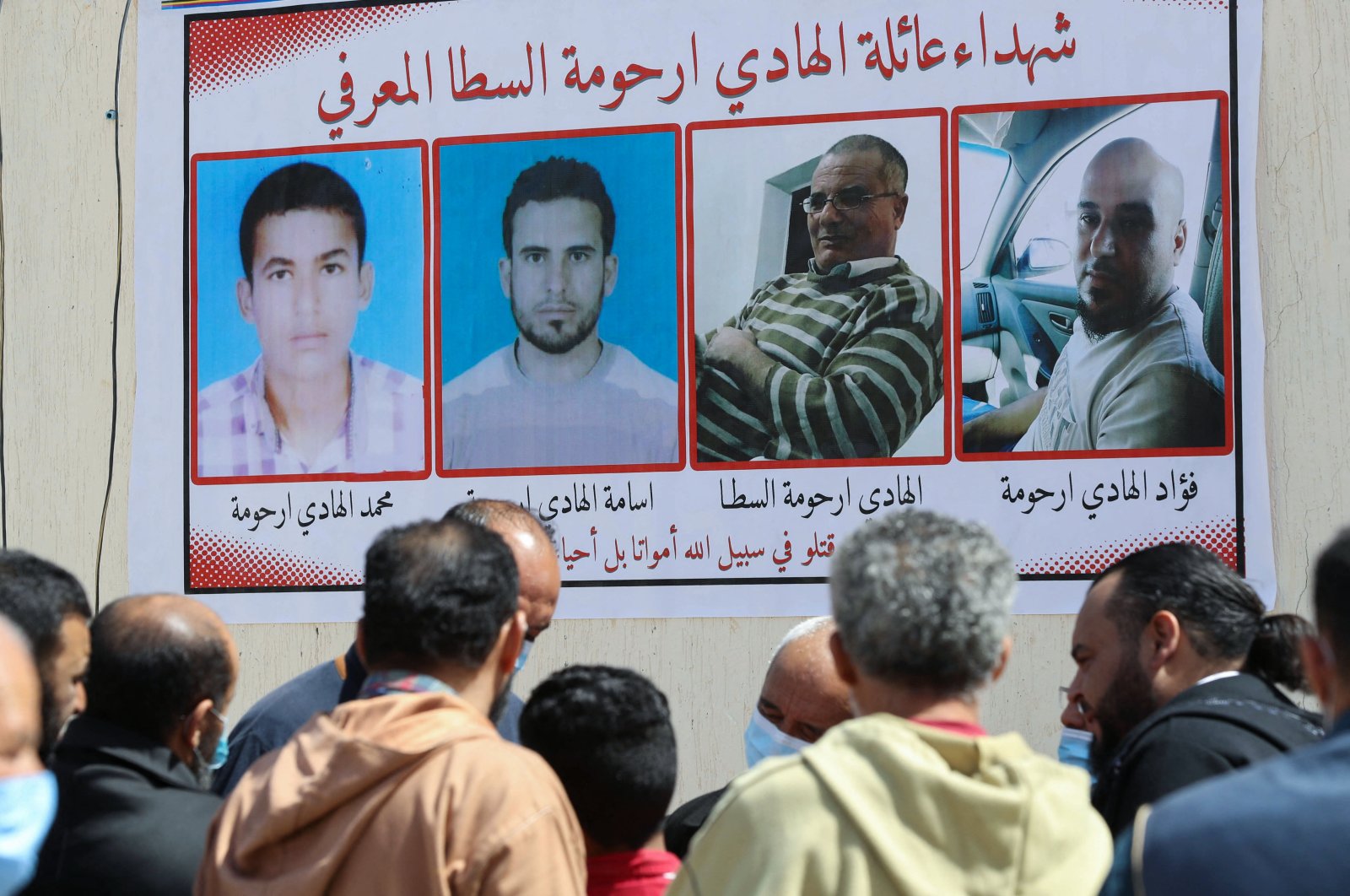 Libyans gather by a wall poster depicting victims from one family during a funeral procession for 12 bodies that were identified from mass graves found in Tarhuna, Libya, March 26, 2021. (AFP Photo)
by Daily Sabah with AFP
Apr 02, 2021 9:27 am

After terrorizing Libya's Tarhuna for years during their rule over the town, the Kaniyat militia has still not been held accountable for their war crimes as authorities continue to find mass graves left behind.

"They spared no child, no woman, no old man," said Mohamed Amer, mourning those murdered during the reign of terror by six brothers who ruled the Libyan town with bloodshed.

"I am the father of the martyr Moaid, killed in cold blood by the criminal gang of Kaniyat," said Amer, a silver-haired father in his fifties.

The Kaniyat were a gang of six brothers who commanded a militia that traumatized the town of Tarhuna in war-ravaged Libya, systematically executing not only their opponents but slaughtering their entire families. Those they did not kill they cowed into submission. The brothers paraded through the town in a show of force – with a pair of leashed lions roaring at the crowd.

Libya has been ravaged by conflict since the fall and killing of veteran dictator Moammar Gadhafi in a NATO-backed 2011 revolt and an array of armed groups and militia forces arose to fill the vacuum. In Tarhuna, it was the militia of Kaniyat, who took power in 2015.

Now the brothers are gone, toppled from power last year, but their shadow still hangs over the town. After their ousting, digging began to exhume the corpses of the people they butchered. Multiple mass graves have been unearthed in the farming town some 80 kilometers (50 miles) southeast of the capital Tripoli. Some bodies were found blindfolded with their wrists tied.

Amer, like many of the dusty town's residents, prays for the latest bodies dug up. Near a mosque, where a line of 10 ambulances are parked on an avenue of palm trees, posters on the wall bear the images of the "martyrs" of Tarhuna. Some of the posters are of small children. The last convoy took away 13 bodies.

"Most of Tarhuna's sons are in the soil," Amer said.

So far, 140 bodies have been exhumed in a slow process that began in June 2020 after the town was captured from eastern-based forces loyal to putschist Gen. Khalifa Haftar. The Kaniyat had first supported the internationally recognized Government of National Accord (GNA) based in Tripoli, which was mainly backed by Turkey and Qatar.

But when Haftar's forces used Tarhuna as a launchpad for an offensive against the capital in April 2019, the Kaniyat switched loyalties. They chose the losing side.

"The truth has now come to light," Amer said. "We now ask that they be arrested and tried, otherwise there can be no reconciliation."

Human Rights Watch (HRW) says at least 338 people were abducted or reported missing during the five-year rule of the Kaniyat. "Residents reported that the militia often abducted, detained, tortured, killed and (caused the) disappearance of people who opposed them or who were suspected of doing so," the HRW said.

Human rights activist Issa Harouda, who himself lost family members at the militia's hands, said the Kani brothers recruited gunmen from Bedouin herders, wooing them to fight with guns and cash. "They surrounded themselves with henchmen who they gave arms and money to, taking advantage of their poverty," he said.

In the town square, several hundred people gathered recently, to watch the latest bodies exhumed, wrapped in shrouds and carried on stretchers. "The Kaniyat ruled the city with an iron fist," said Milad Mohamed Abdelgader, an elderly man dressed in a black robe, who came in memory of two of his cousins who vanished when the brothers were in charge. "No one had the right to speak... They had eyes everywhere."

Few of the bodies could be immediately identified, but forensic experts gathered what evidence they could, including DNA samples, before formal burials. The crowd recited prayers for the dead, and then, after a long silence, a voice shouted through a megaphone to demand that the "Kaniyat terrorist criminal gang" be tried.

"God will do them justice, sooner or later," Abdelgader said quietly, before bursting into tears, his index finger pointing to the heavens. But the militia has evaded justice so far. Two of the brothers have been killed, while the remaining four are on the run. Many in Tarhuna claim they are hiding out in Benghazi to the east.

"No one has yet been held responsible," said HRW researcher Hannan Salah.

Today, the luxury villas of the militia commanders lie in ruins. Down a rough track, the lavish marble villas of the brothers have been smashed by artillery shells and daubed with graffiti remembering the "martyrs" they massacred.

"The Kaniyat seized two factories and several businesses, and they forced wealthy families out to grab their fortune," said one resident, dressed in military uniform.

"They were strutting about in their pick-ups with their wild animals, and they terrorized the city. All this, for what? For the money."