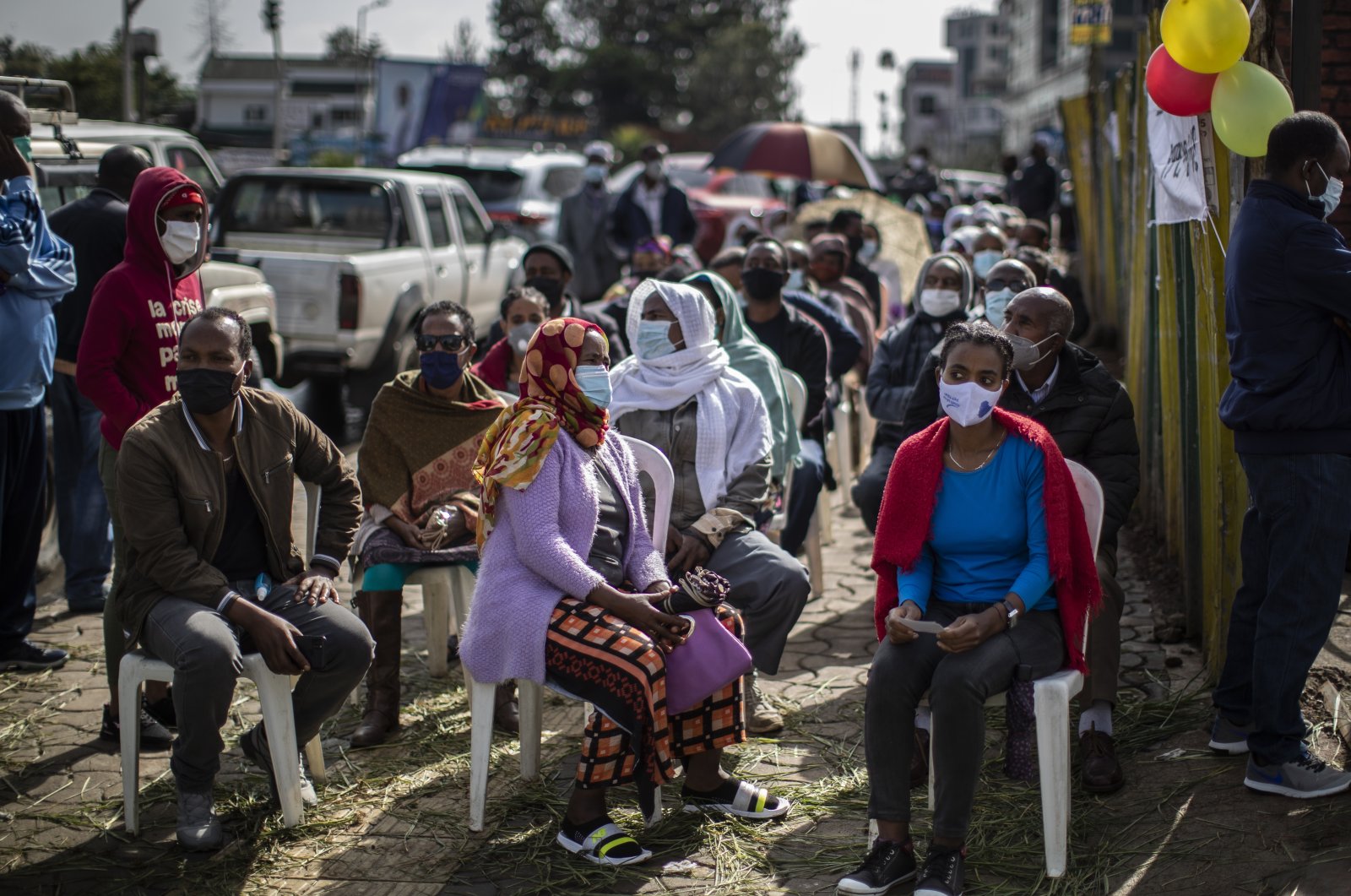 Ethiopians queue on chairs in the street as they wait to cast their votes in the general election at a polling center in the capital Addis Ababa, Ethiopia, Monday, June 21, 2021. (AP Photo)
by Agencies Jul 10, 2021 10:35 pm
RECOMMENDED

The National Election Board of Ethiopia said the ruling party won 410 seats out of 436 contested in the federal parliament, which will see dozens of other seats remain vacant after one-fifth of constituencies didn't vote due to unrest or logistical reasons. Ethiopia's new government is expected to be formed in October.

Abiy on Saturday hailed the outcome. He described the June 21 vote as a "historically inclusive election," in a statement on Twitter, adding: "Our party is also happy that it has been chosen by the will of the people to administer the country."

The vote was a major test for Abiy, who came to power in 2018 after the former prime minister resigned amid widespread protests. Abiy oversaw dramatic political reforms that led in part to a Nobel Peace Prize the following year, but critics say he is backtracking on political and media freedoms. Abiy also has drawn massive international criticism for his handling of the conflict in the Tigray region that has left thousands of people dead.

June’s vote, which had been postponed twice due to the COVID-19 pandemic and logistical issues, was largely peaceful but opposition parties decried harassment and intimidation. No voting was held in the Tigray region.

Abiy has hailed the election as the nation’s first attempt at a free and fair vote, but the United States has called it "significantly flawed,” citing the detention of some opposition figures and insecurity in parts of Africa’s second-most populous country.

Popular opposition parties in the Oromia region, the Oromo Federalist Congress and the Oromo Liberation Front of Ethiopia's largest federal state, boycotted the election saying their candidates had been arrested and offices vandalized. The ruling party ran alone in several dozen constituencies. The most competitive regions were Amhara, the country's second-largest, and the capital Addis Ababa.

The head of the electoral board, Birtukan Mideksa, said during Saturday's announcement that the vote was held at a time when Ethiopia was experiencing challenges, "but this voting process has guaranteed that people will be governed through their votes.”

"I want to confirm that we have managed to conduct a credible election,” she said according to remarks carried by the Associated Press (AP).

Voter turnout was just over 90% among the more than 37 million people who had been registered to vote.

The Prosperity Party was formed after the dismantling of Ethiopia’s former ruling coalition, which had been dominated by Tigray politicians. Disagreements over that decision signaled the first tensions between Abiy and Tigray leaders that finally led to the conflict in the region in November.

Though Abiy hinted in 2018 that Ethiopia will limit a prime minister's terms to two, it is not clear whether he will act on that.

Election day saw "no serious or widespread human rights violations" in stations observed by the state-affiliated Ethiopian Human Rights Commission (EHRC). Yet in a preliminary report, the EHRC noted that some constituencies experienced "improper arrests," voter intimidation and "harassment" of observers and journalists. The EHRC also said it had observed several killings in the days leading up the vote in Oromia.

The opposition National Movement for Amhara filed a complaint to the electoral board over "serious problems" during the vote.

"A lot of our observers were beaten and chased down by militias of the ruling party," senior party member Dessalegn Chanie told Agence France-Presse (AFP).

Dessalegn is one of the opposition politicians who has so far won a spot in the federal parliament, though he said the party would decide whether to take its seats only after the electoral board rules on its complaints.

Even a small amount of opposition representation in parliament would be an improvement and could fend off future instability, said Addisu Lashitew of the Brookings Institution in Washington.

"People, especially the youth, they need to be heard, so they should have a voice in the political process," Addisu said. "Even if it may not be always successful in influencing political decisions, the fact that they are heard itself is important."

Incorporating opposition voices into formal political processes means they are less likely to become "radicalized" or spur a large-scale protest movement, he added.

The Prosperity Party "shouldn't read too much" into the results given the "deep political cleavages" that remain, Tegbaru Yared, a researcher with the Institute for Security Studies, wrote this week. Instead, the party "should focus on stabilizing the country, stopping intercommunal conflicts, managing inflation, engaging the opposition and initiating an all-inclusive national dialogue," Tegbaru wrote.