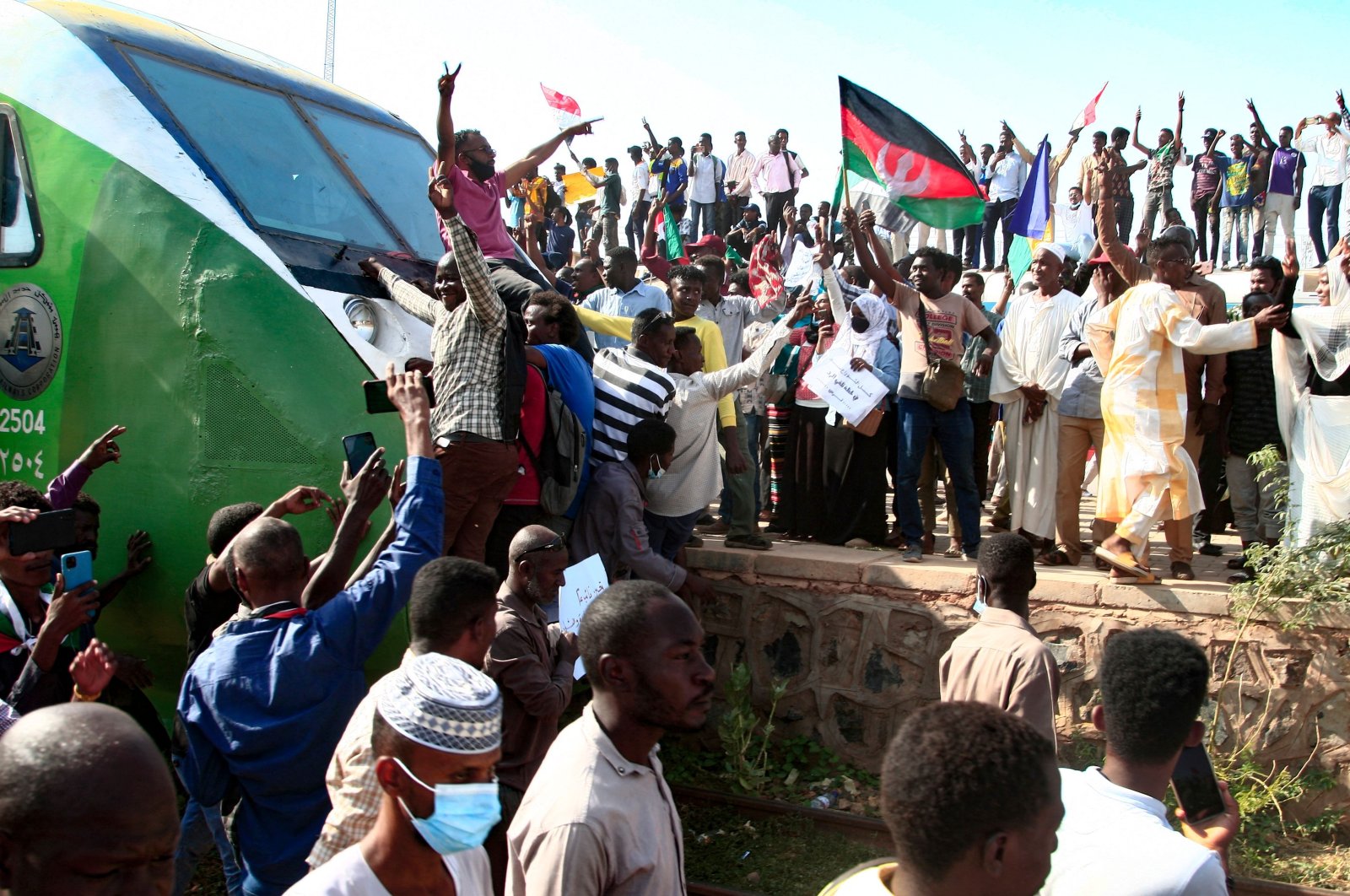 Sudanese protesters cheer as they greet fellow demonstrators upon their arrival on a train from Madani, the capital of Sudan's east-central al-Jazirah state, to join a rally in support of a civilian-led transition to democracy, Sept. 30, 2021. (AFP Photo)
by ASSOCIATED PRESS
Oct 01, 2021 8:40 am

Thousands gathered in Sudan's capital Khartoum Thursday demanding an exclusively civilian transitional government and accused the generals now in power of derailing the transition to democracy.

As the protesters neared a central street housing government headquarters, they were met by tear gas fired by the security forces.

Sudan has been ruled by an interim, joint civilian-military government since 2019. The military ousted longtime autocrat Omar al-Bashir in April that year, following four months of mass protests against his rule. Months after al-Bashir’s toppling, the ruling generals agreed to share power with civilians representing the protest movement.

"The objective of these marches is to protect Sudan’s democratic transition and there is no way to achieve that without ending any partnership with the military council,” said a statement issued by the Sudanese Professionals Association, which spearheaded the nationwide uprising that kicked off in December 2018 and culminated in al-Bashir’s ouster.

Tensions between the civilians and generals in the transitional government have increased since Sudan’s interim authorities last week said they foiled a coup attempt within the military. Officials blamed al-Bashir loyalists for the move.

Prime Minister Abdalla Hamdok, the civilian face of the government, described the coup attempt as an effort to undermine Sudan’s democratic transition. The interim government has been under pressure to end wars with rebel groups as it seeks to rehabilitate the country’s battered economy, attract much-needed foreign aid and deliver the democracy it promised.

On Thursday, demonstrators waved Sudanese flags and chanted pro-democracy slogans. They accuse the military of dragging its feet on transferring power to civilians, purging state institutions of remnants of al-Bashir's regime and bringing to justice those responsible for the killing of dozens of protesters in June 2019, when security forces dispersed a sit-in outside the military headquarters in Khartoum.

In a scene reminiscent of the 2018 uprising, a train carried protesters from other Sudanese provinces to Khartoum. Train cars were packed, with demonstrators waving Sudanese flags from windows and making victory signs, while others rode on the rooftop of the slow-moving train.

Many protesters gathered at the entrance to a street leading to the government buildings, including the Republican Palace, which is the seat of the ruling Sovereign Council, where they were stopped by security forces and tear gas.

The council was created by a power-sharing agreement signed in August 2019 by the military and pro-democracy activists. It consists of five military and six civilian members and is headed by Gen. Abdel-Fattah Burhan.