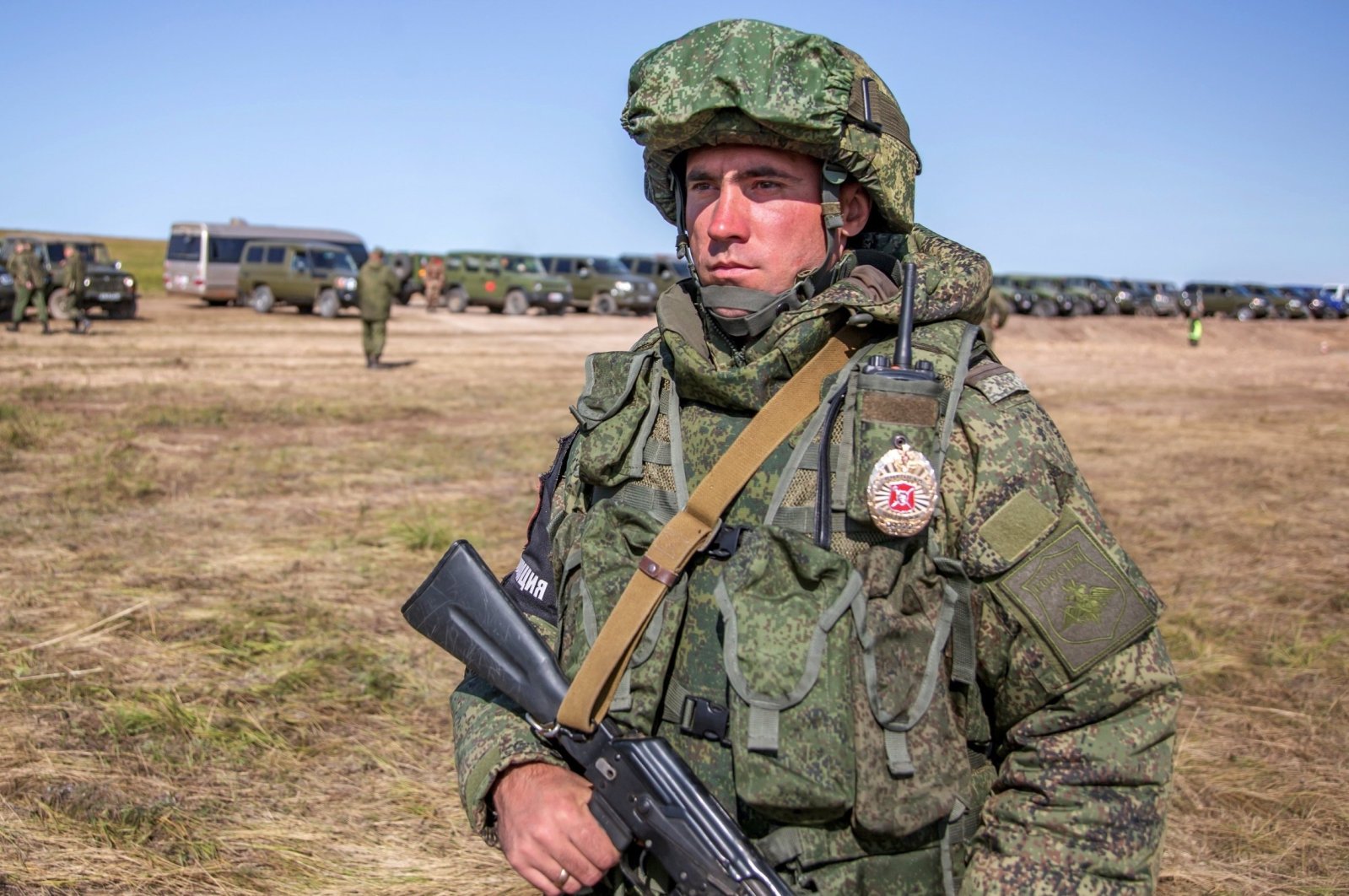 A Russian soldier guards an area during the military exercises in the Chita region, Eastern Siberia, during the Vostok 2018 exercises in Russia, Sept. 11, 2018. (AP)
by DAILY SABAH WITH AA Mar 04, 2021 2:14 pm
RECOMMENDED

Known for its heavy presence in war-torn Libya, the Russian security company Wagner Group is reportedly expanding throughout the African continent, meddling in conflicts and working in favor of the Kremlin's interests.

Formed back in 2014 in Ukraine and owned by businessperson Yevgeny Prigozhin, the Wagner Group is intensely involved in several conflicts not only in Ukraine but also across the world, from the Middle East to Latin America. The most well-known presence of the group, however, has taken place in Syria and Libya, where Russia has actively participated in the civil war and reportedly used the Wagner Group as its proxy in the region. Although Russia officially does not acknowledge any cooperation with the Wagner Group, the reports from the field prove otherwise.

After its initial foundation back in 2016, it was reported that the group had 1,000 employees, which quıickly culminated to 6,000 in 2017. The group reportedly has offices in Argentina, St. Petersburg and Hong Kong.

Although the company's employees are not allowed to take and post any photographs or video recordings or share their location, there are many reports on the group's presence in various countries, which often witness controversy.

Lately, the locations where Wagner's presence has been reported expanded from Libya to (almost) the entire African continent, where the group is reportedly not only involved in the conflicts by training armies but also operates mining and cybersecurity companies.

Some of the African countries that reportedly have a Wagner presence are Sudan, the Central African Republic (CAR), Zimbabwe, Angola, Madagascar, Sudan, Guinea, Guinea Bissau, Mozambique, and (most probably) the Democratic Republic of the Congo.

It is reported that Wagner (and its side companies) have some privileges and rights in these countries to use and benefit from the natural resources of these countries and supply arms, technology and military services in return.

In Libya, Russia has backed putschist Gen. Khalifa Haftar in his fight to seize power from the U.N.-recognized Government of National Accord (GNA) in Tripoli.

The U.S. Africa Command (AFRICOM) on July 24, 2020, accused Russia of “playing an unhelpful role in Libya by delivering supplies and equipment to the Wagner group.”

The U.S. also last year imposed sanctions on three individuals and five entities that are linked to the Wagner Group after accusing the mercenary group of laying landmines in and around Tripoli.

In the CAR, where there have been domestic tensions since 2013, it is speculated that Russia has toppled France as a dominant foreign power in the country through the presence of the Wagner Group.

It is estimated that there are approximately 450 Wagner mercenaries in the country today, who have operated as military trainers since 2018. According to a website called "The Africa Report," currently there are more than a thousand "military trainers" in the CAR.

Wagner acts as a security provider in the country and has a major role in training the presidential guards and the army.

However, the group also protects the gold and diamond mines in the CAR and confiscates some of the revenues received through these mines.

Currently, the Wagner Group mercenaries are located in Berego Palace, which was once the headquarters of Jean-Bedel Bokassa, then-self-claimed emperor, and has now been turned into a military base.

In Sudan, it is known that the Wagner Group conducted searches for mine sites through its satellite companies "Meroe Gold" and "M Invest" back in 2017.

The group has also provided military training to the Sudanese military. The mercenaries reportedly have a presence throughout Sudan, from Khartoum to Darfur. It also is known to transfer weapons and personnel from Sudan to the CAR regularly, which is speculated to be one of the reasons why the U.S. has sanctioned M Invest back in July 2020.

The Wagner Group initially entered Sudan after Sudan's President Omar al-Bashir expressed his need for protection from the U.S.' "aggressive actions" to Russian President Vladimir Putin. Since then, even after al-Bashir was overthrown in 2019, Wagner has sided with the Sudanese government against South Sudan.

Currently, it is estimated that there are about 300 Wagner mercenaries in Sudan.

In Mozambique, Wagner mercenaries have been operating since 2018, particularly under the pretext of fighting against Daesh. Unlike other countries, Mozambique is known for being a challenge for Wagner since it has heavy rains and wild forests, which have caused at least 10 mercenaries' death. Currently, it is estimated that there are about 160-300 Russian mercenaries in Mozambique.

Wagner has reportedly invested $60 billion in the country in an attempt to benefit from the natural gas resources. In Mozambique's politics, some of the political parties accuse Wagner's Russian mercenaries of launching sabotage activities, which is a claim that was heavily denied by the Kremlin.

Many pundits claim that such activities are a part of the Kremlin's geostrategic vision in Africa.

Back in August 2020, a secret German Foreign Ministry report claimed that Russia is planning to step up its military cooperation with African countries as part of its new Africa strategy, including building bases in six countries. The classified document on what it calls "Russia's new Africa ambitions" says Putin had made "Africa a top priority."

Furthermore, it said, the Kremlin was "contractually assured" it would "be allowed to build military bases in six countries," namely the CAR, Egypt, Eritrea, Madagascar, Mozambique, and Sudan. But Russia is not only aiming for a permanent deployment of its troops in Africa, but it also increasingly relying on private armies or proxy groups like the Wagner Group, the report said.

Russia is already a major arms supplier to the African continent.