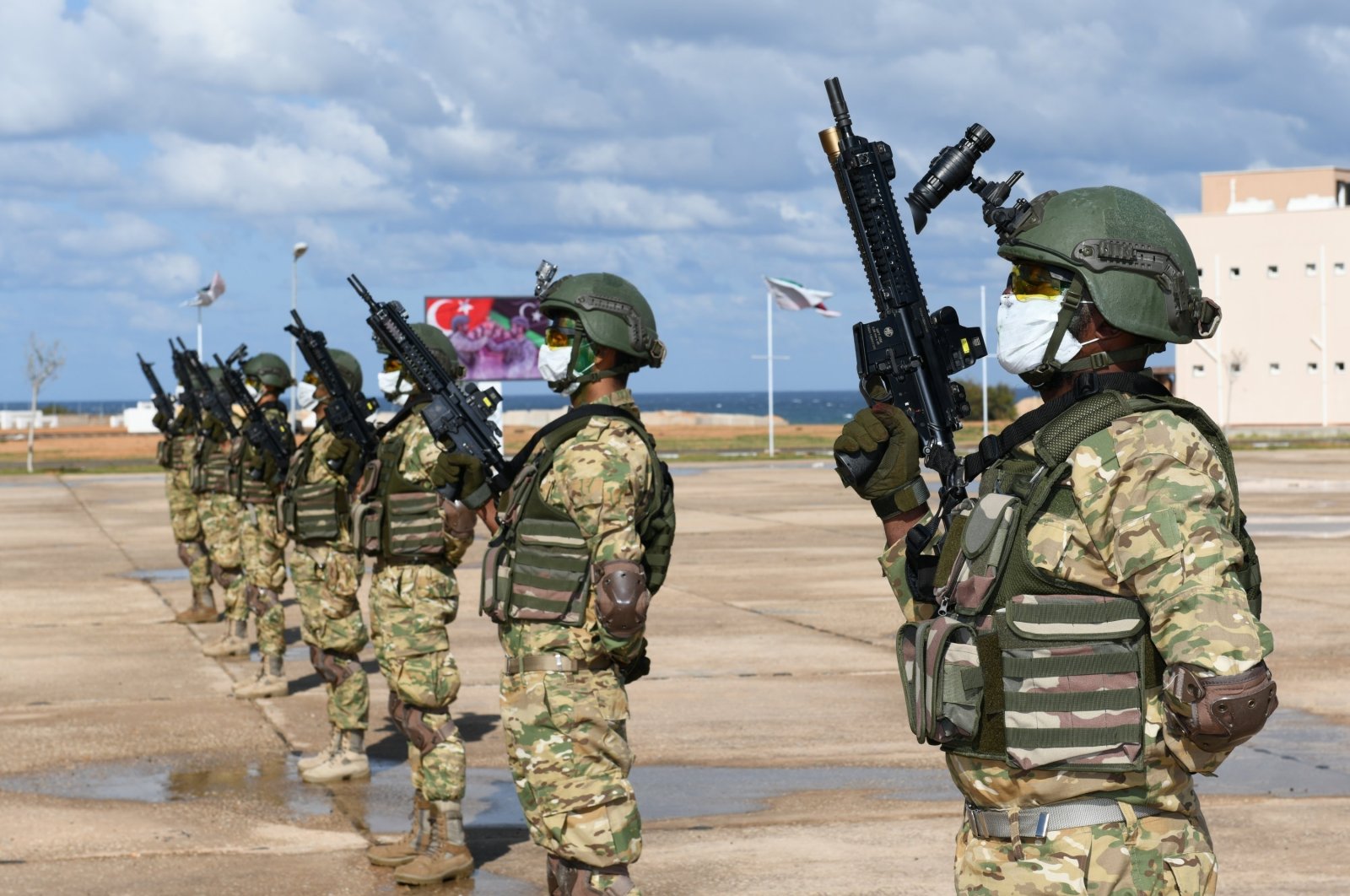 Libyan soldiers conduct a graduation ceremony in the Libyan capital, Tripoli, following the completion of training by the Turkish Armed Forces, Nov. 22, 2020. (AA Photo)
by Dilara Aslan May 18, 2021 2:02 pm

Following increasing media reports on Turkey’s presence in Libya, security sources have pointed out that Ankara’s forces cannot be classified within the scope of foreign fighters as they are in the country upon official invitation, supporting the government

Turkish elements that are legitimately in Libya upon the official invitation of the government and Russia’s Wagner mercenary group that has been backing a warlord, cannot be considered equal, security sources stated.

“It doesn't matter the platform, considering the two sides (Wagner mercenaries and Turkish forces) equal is not right,” the sources told Daily Sabah.

Recently, some media outlets and reports have been comparing Turkish forces on the ground in Libya with the illegitimate mercenaries of the Wagner Group. Even last week, U.N. Secretary-General Antonio Guterres stated that foreign fighters and mercenaries remain in Libya in violation of last October’s cease-fire agreement and called for their withdrawal and an end to violations of the U.N. arms embargo.

In April 2019, east-based putschist Gen. Khalifa Haftar and his forces, backed by Egypt, Russia, France and the United Arab Emirates (UAE), launched an offensive to try and capture the capital, Tripoli. His 14-month-long campaign collapsed, and the fall of Tripoli was prevented after Turkey stepped up its military support of the U.N.-backed government, the sources said.

An October cease-fire agreement that included a demand for all foreign fighters and mercenaries to leave Libya within 90 days led to a deal on the transitional government and December elections.

“Contrary to what is written in open sources, the Wagner Group conducted 137 flights, according to air traffic control systems, between October 2020 and April 2021 from Syria to Libya’s East,” the sources said. “These are numbers determined by basic and official air traffic control systems. Besides these, it is known that there have also been flights over Egypt that could not be determined because the IFF system was closed.”

IFF stands for Identification Freind or Foe and is a radar-based identification system that uses transponder signals to identify aircraft in particular.

On the other side, Turkey’s flights are made in coordination with local authorities, with the knowledge of officials, sources pointed out, saying that Ankara’s flights are also rare compared to that of Wagner.

“It can be seen that Turkey’s flights to Libya are made within the scope of education, health and humanitarian aid support, including COVID-19 health equipment as well as basic maintenance and reparation parts,” they said.

“On the other side, the Wagner Group’s existence around oil facilities puts forth their real aim.”

The group made its presence most pronounced in Syria and Libya, where Russia actively participated in the civil war and reportedly used the Wagner Group as its proxy in the region. Although Russia officially does not acknowledge any cooperation with the Wagner Group, the reports from the field prove otherwise

The sources underlined that in light of these, statements saying that Turkish soldiers should be removed from the region do not reflect reality.

Guterres said in a report to the U.N. Security Council (UNSC) obtained Friday by The Associated Press (AP) that the smooth transfer of power to a new interim government, which took power in March, “brings renewed hope for the reunification of the country and its institutions and for a lasting peace.”

But he said progress must continue on the political, economic and security tracks to enable elections to go ahead on Dec. 24.

Guterres said in the new report that while the cease-fire continues to hold, the U.N. political mission in Libya has received reports of fortifications and defensive positions being set up in central Libya on the key route between the strategic city of Sirte, the gateway to the country's major oil fields and export terminals, and Jufra.

“Despite the commitments made by the parties, air cargo activities reportedly continued with flights to various air bases in Libya’s western and eastern regions,” the secretary-general said. “Reports indicated that there was no reduction of foreign fighters or of their activities in central Libya.”

Last month, the Security Council approved a resolution urging all foreign forces and mercenaries to leave Libya and authorizing a small U.N. team to monitor the cease-fire agreement. In an April 7 letter to the council, Guterres proposed an initial maximum of 60 monitors for a phased deployment as part of the U.N. mission, known as the United Nations Support Mission in Libya (UNSMIL).

In his new report, Guterres said that the monitors’ deployment to Libya is contingent on the U.N. General Assembly (UNGA) approving the resources to cover security, logistical, medical and operational requirements, which will be submitted “in the near future.”

The International Criminal Court (ICC) on Monday warned mercenaries and foreign troops in war-torn Libya that they could face prosecution, demanding an end to the use of detention centers to commit a variety of serious crimes.

"The office has received concerning information about the activities of mercenaries and foreign fighters in Libya," said chief prosecutor Fatou Bensouda during a virtual meeting of the U.N. Security Council on Libya.

"Crimes committed by mercenaries and foreign fighters on Libyan territory may fall under the jurisdiction of the court, no matter the nationality of the persons involved," she said.

Bensouda said the court was receiving information about crimes against detainees ranging from disappearances and arbitrary detention to murder, torture, and sexual and gender-based violence.

"We have collected credible information and evidence on serious crimes, allegedly committed in official and unofficial detention facilities in Libya," the Gambian prosecutor said.

The U.N. estimated that 8,850 people have been detained without due process in 28 official Libyan prisons, while another 10,000 people, including women and children, are being held in other facilities controlled by armed factions.

"I urge all parties to the conflict in Libya to immediately put an end to the use of detention facilities to mistreat and commit crimes against civilians," said the prosecutor, who in mid-June will leave her position and be replaced by British lawyer Karim Khan.

Bensouda previously in November stated that the offensive by eastern forces under Haftar's command formed part of “a pattern of violence that involves the indiscriminate airstrikes and shelling of civilian areas, arbitrary abduction, detention and torture of civilians, extrajudicial killings, enforced disappearances and pillaging of civilian property.”