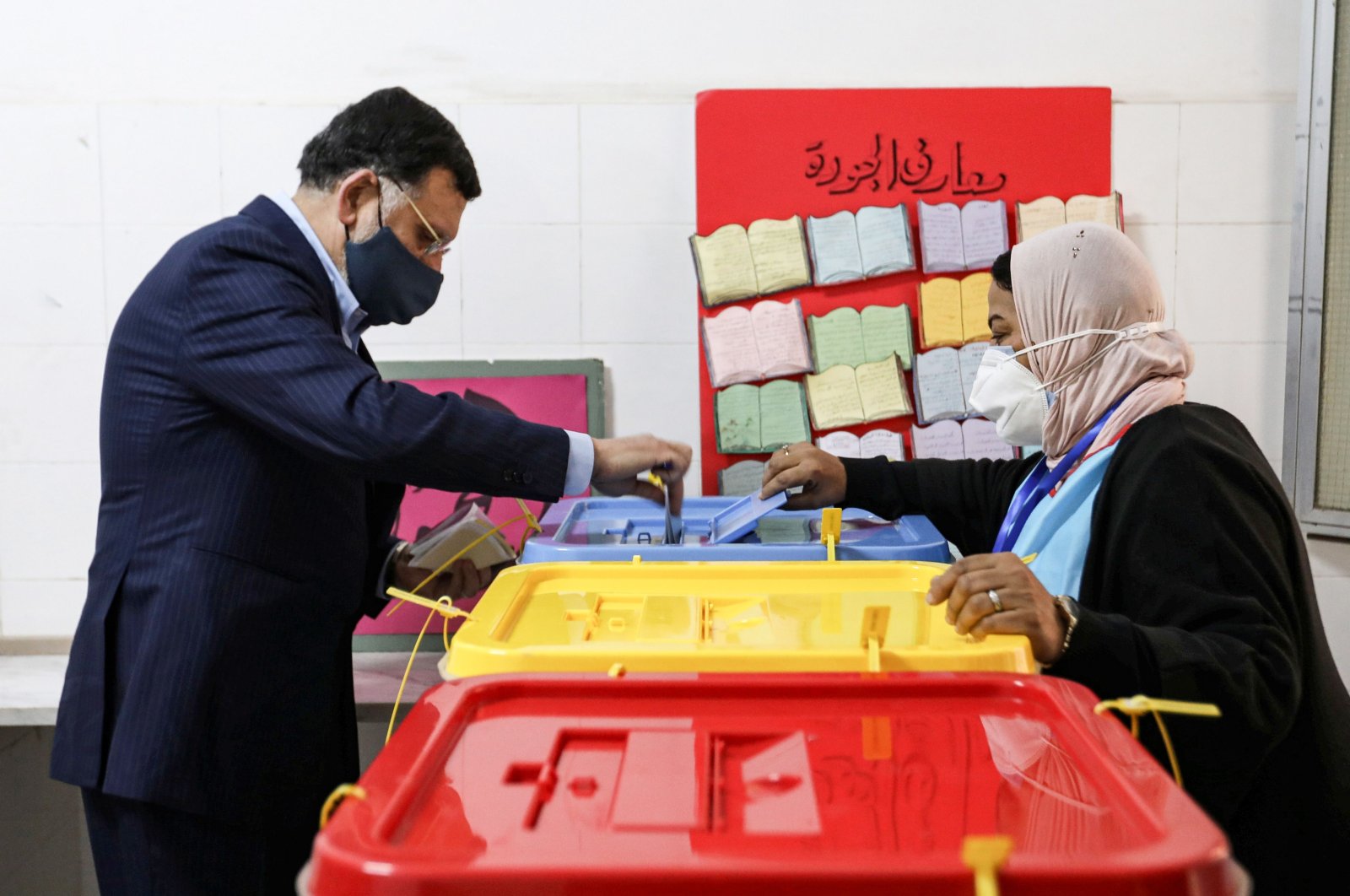 Fayez Sarraj, outgoing prime minister of the UN-recognized Libyan Government of National Accord (GNA), casts his vote during an election for the Tripoli Municipal Council, in Libya's capital on Feb. 6, 2021. (AFP Photo)
by DAILY SABAH Feb 10, 2021 12:23 pm
RECOMMENDED

The United Nations Security Council (UNSC) on Tuesday welcomed Libya’s new transitional government as “an important milestone” in the country’s political process and pledged to support the new authorities.

The new authority will replace the U.N.-backed Government of National Accord (GNA), led by Fayez Sarraj, which has been in charge of the capital, Tripoli, and western areas, and the eastern administration linked with putschist Gen. Khalifa Haftar.

The council called for the interim authority to push ahead with preparing for the presidential and parliamentary elections expected on Dec. 24.

The vote was part of a complex process it is hoped will help shepherd the deeply divided state toward peace and build on a fragile cease-fire to end more than a decade of devastating conflict.

The council also called on all parties to the conflict to stick to the U.N.-imposed weapons embargo and the agreed cease-fire, and for all foreign forces and mercenaries to withdraw from Libya.

The latest upsurge in violence in the Libyan conflict, which has been one of the most intractable remnants of the "Arab spring" a decade ago, began in April 2019 when Haftar, backed by Egypt, France, Russia and the United Arab Emirates (UAE), launched an offensive seeking to capture Tripoli. His campaign collapsed after Turkey stepped up its support for the U.N.-supported government in Tripoli.

This led to a cease-fire agreement in October that called for the withdrawal of all foreign forces and mercenaries in three months and adherence to a U.N. arms embargo, provisions which have not been met. The deadline for the departure of foreign mercenaries passed as of late January, but calls to accelerate the process continue as no movement has been announced or observed on the ground and mercenaries remain in Libya.

UNSC members called on all parties to implement the cease-fire agreement “in full,” to quickly withdraw foreign forces and mercenaries, and fully comply with the arms embargo.

Last Thursday, the council requested Secretary-General Antonio Guterres to swiftly deploy an advance team to Libya as a first step to sending monitors to observe the cease-fire between the warring parties.

Guterres recommended in late December that international monitors be sent under a U.N. umbrella to observe the cease-fire from a base in the strategic city of Sirte, the gateway to Libya’s major oil fields and export terminals. He said an advanced team should be sent to Tripoli as a first step to “provide the foundations for a scalable United Nations cease-fire monitoring mechanism based in Sirte.”

The council also thanked American diplomat Stephanie Williams, the former acting U.N. special envoy for Libya, for her role in getting the Libyan rivals to agree to the cease-fire, December elections and the transitional government.

Former Slovak foreign minister Jan Kubis, a veteran U.N. diplomat, took over Monday as the U.N. special representative for Libya. His office said he has spoken with key players in the east and west, the president-designate of the presidency council and the prime minister-designate.