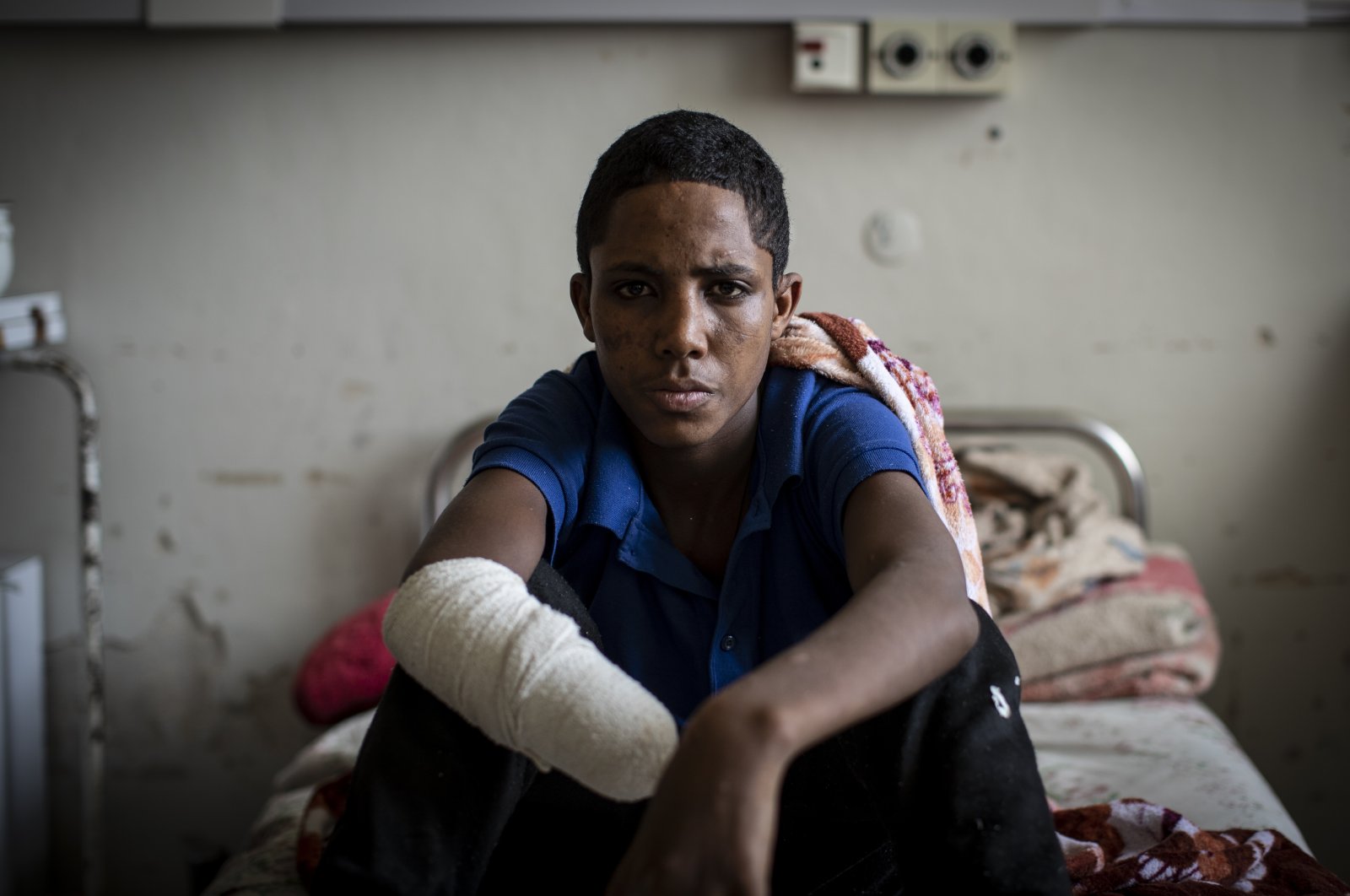 Haftom Gebretsadik, a 17-year-old from Freweini, Ethiopia, near Hawzen, who had his right hand amputated and lost fingers on his left after an artillery round struck his home in March, sits on his bed at the Ayder Referral Hospital in Mekele, in the Tigray region of northern Ethiopia, May 6, 2021. (AP Photo)
by ASSOCIATED PRESS Nov 03, 2021 11:18 am
RECOMMENDED

UN worried over attempts to thwart electoral process in Libya

The U.N. human rights chief said Wednesday that Ethiopia’s yearlong war has been marked by "extreme brutality” as a joint investigation into alleged atrocities faulted all sides for committing abuses but avoided saying who was the most to blame.

The investigation was hampered by authorities’ intimidation and restrictions and didn’t visit some of the war’s worst-affected locations.

The report, a rare collaboration by the U.N. human rights office with the government-created Ethiopian Human Rights Commission, was released a day before the war’s one-year mark and as Africa’s second-most populous country enters a new state of emergency with rival Tigray forces threatening the capital.

The U.N. told The Associated Press (AP) that the collaboration was necessary for its team to gain access to a troubled region that Ethiopian authorities have largely prevented journalists, rights groups and other outside observers from entering. The conflict that erupted in Ethiopia’s Tigray region has killed thousands of people since the government of Nobel Peace Prize-winning Prime Minister Abiy Ahmed allowed soldiers from neighboring Eritrea to invade Tigray and join Ethiopian forces in fighting the Tigray forces who long dominated the national government before Abiy took office.

Ethnic Tigrayans across the country have since reported being targeted with arbitrary detentions, while civilians in Tigray have described gang rapes, famine and mass expulsions.

"In western Tigray, it was apparent that the Tigrayans had left most of the areas, as it was difficult to find Tigrayans to interview,” the new report says.

The joint investigation covers events until late June when the Tigray forces regained much of their region, but it failed to visit some of the deadliest sites of the war, including the city of Axum, because of security and other obstacles. Notably, the report says, those obstacles included the Ethiopian government’s failure to release satellite phones procured for the investigation.

The investigation says all sides, including forces from the neighboring Amhara region that have claimed western Tigray, have committed abuses, which may amount to crimes against humanity and war crimes. It breaks little new ground and confirms, in general, the abuses described by witnesses throughout the war. But it gives little sense of scale, saying only that the more than 1,300 rapes reported to authorities are likely far fewer than the real number.

Among the investigation’s findings: Several Ethiopian military camps were used to torture captured Tigray forces or civilians suspected of supporting them. Others were detained in "secret locations” and military camps across the country, with arbitrary detentions in many cases. Tigray forces detained some ethnic Amhara civilians in western Tigray in the early days of the war on suspicion of supporting the military, and in some cases tortured them.

"The Tigray conflict has been marked by extreme brutality. The gravity and seriousness of the violations and abuses we have documented underscore the need to hold perpetrators accountable on all sides,” said Michelle Bachelet, the U.N. high commissioner for human rights. And yet the report gives little sign that Eritrean soldiers were responsible for many of the atrocities, as witnesses have alleged from the earliest days of the war.

Until March, Ethiopia's prime minister denied they were even in the country.

"Some of the absolutely worst violations were committed by the Eritrean defense forces,” U.S. Horn of Africa envoy Jeffrey Feltman said Tuesday. Ethiopia’s government imposed a blockade on Tigray since the Tigray forces regained control in June, cutting off almost all access for commercial goods and humanitarian aid. That followed large-scale looting and destruction of food and crops across the region that "has had a severe socioeconomic impact on the civilian population,” the report says.

In addition, some camps for displaced people who fled the war didn't receive food rations for months. And yet the joint investigation "could not confirm deliberate or willful denial of humanitarian assistance to the civilian population in Tigray or the use of starvation as a weapon of war.” It did call for further investigation.

The new report, based on more than 260 interviews with victims and witnesses, said it had received no response from Eritrea’s government or from Amhara regional officials, and the Tigray forces expressed their opposition to the involvement of the Ethiopian Human Rights Commission.

The report acknowledged that the presence of EHRC staffers at times inhibited interviews. The investigation says the Ethiopian government should "consider” setting up a court to ensure accountability and the international community should "support” the government in restoring stability. Ethiopia’s government has said it would pursue accountability for perpetrators, but the new report expresses concern that "investigations conducted by Ethiopian national institutions do not match the scope and breadth of the violations it has identified.”

UN worried over attempts to thwart electoral process in Libya