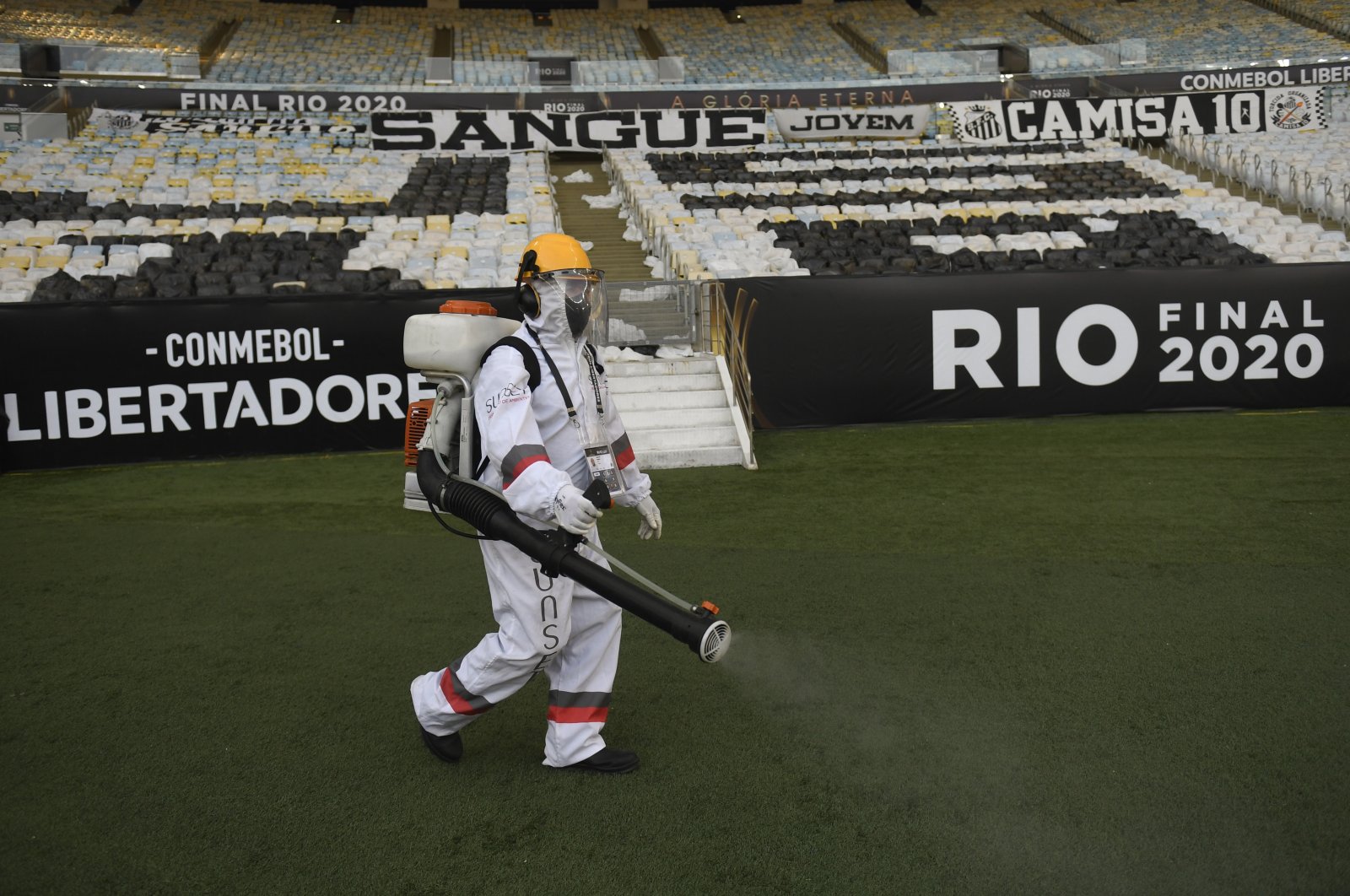 A worker wearing protective gear disinfects the pitch as a precaution against the coronavirus during the half break of a Copa Libertadores final soccer match between Brazil's Palmeiras and Brazil's Santos at the Maracana stadium in Rio de Janeiro, Brazil, Jan. 30, 2021. (AP Photo)
by Agencies Feb 12, 2021 11:55 am
RECOMMENDED

The coronavirus variant identified in the Brazilian Amazon maybe three times more contagious but early analysis suggests vaccines are still effective against it, the country's health minister said Thursday, without providing evidence for the claims.

Under pressure as the coronavirus variant hammers the jungle city of Manaus with a devastating second wave of infections, Health Minister Eduardo Pazuello sought to reassure lawmakers that the surge of recent months was unexpected but coming under control.

He also told a Senate hearing that Brazil would vaccinate half its eligible population by June and the rest by the end of the year – an ambitious target as the country has barely guaranteed doses for half the population.

Brazil began immunizations with vaccines made by China's Sinovac Biotech and Britain's AstraZeneca about three weeks ago. Pazuello did not explain how their effectiveness against the Manaus variant was analyzed.

"Thank God, we had clear news from the analysis that the vaccines still have an effect against this variant," Pazuello said. "But it is more contagious. By our analysis, it is three times more contagious."

The Health Ministry, which has not provided information about any such analysis, did not immediately respond to a request for more information.

The Butantan Institute in Sao Paulo, which has partnered with Sinovac to test and produce the Chinese vaccine, said in a statement that it had begun studies regarding the Manaus variant but would not have a conclusion for two weeks.

The Fiocruz biomedical center in Rio de Janeiro, which has partnered with AstraZeneca to fill and finish doses of its vaccine developed with Oxford University, said it is studying its efficacy against the Amazon variant, sent samples to Oxford and is awaiting results.

Brazil has had almost 235,000 deaths, second only to the U.S., according to a tally by Johns Hopkins University. In a survey last month by pollster Datafolha, 17% of respondents said they don’t intend to get either of the vaccines approved in Brazil.

That's higher in northern and west-central regions, which are grouped together by Datafolha, and lower in the wealthier southern and southeastern regions. Health care workers, experts and anthropologists say rejection or fear of the vaccine is partly driven by the doubts sown repeatedly by President Jair Bolsonaro about its efficacy.

Bolsonaro, who was infected with COVID-19 himself last year, has said he doesn’t plan to get vaccinated and insists others shouldn’t unless they want to. He initially refused to authorize the purchase of the Sinovac vaccine and said on Facebook that Brazilians would never be anyone’s "guinea pig.” He also declined the Pfizer vaccine, citing a clause that shielded the U.S. firm from potential liability. He joked there would be no recourse if women grew beards, men’s voices became high-pitched, or people were transformed into alligators. His anti-science message has made its way to the remote communities.

"This anti-vaccine movement does not come from them. It’s being brought by certain missionaries, social media, fake news,” said anthropologist Aparecida Maria Neiva Vilaca, who works with Indigenous communities in the northern state of Rondonia. These communities have had greater access to technology and the internet in recent years, but information often arrives in a "very distorted way,” Waldir Bittencourt, a nurse vaccinating Indigenous and riverine people against COVID-19, told The Associated Press (AP).

In the Purure community, inside the Tumucumaque Mountains National Park, some residents asked if they could be injected with the vaccine imported from India because they thought this meant it had been produced by Indigenous people. In Brazil, the word "Indian” is still widely used to refer to Indigenous people. In other villages, some feared they were being used as test subjects for broader vaccination campaigns among non-Indigenous peoples, while others worried it would let the devil into their bodies.

Some evangelical leaders have been another source of misinformation, they said. Evangelicals largely backed Bolsonaro in the 2018 presidential campaign, and some pastors in remote communities have contributed to spreading his message against getting the COVID-19 vaccine. Audio messages circulating on the WhatsApp messaging app told of pastors claiming they could cure the infected.

In one message, a man recalls a pastor informing him that the vaccine wasn’t necessary, because God could cure him. Vilaca, who teaches social anthropology at the Federal University of Rio de Janeiro when she is not in the north, said the rest of Brazilian society is no different when it comes to misinformation.

"A large portion of the population is also informed only by WhatsApp, social media, and have no access to newspaper information,” she said. Nurse Luciana Dias da Costa also has faced some difficulties in Amazonas state.

Vaccination is particularly crucial in the state, where a surge of infections has overwhelmed the already-fragile public health care system in the capital city of Manaus. It has forced a nationwide mobilization to get oxygen to patients struggling to breathe or airlift hundreds to better-equipped facilities in other states.

"We want to vaccinate everybody, but as I said, some accept, and some don’t,” da Costa, 46, said in an interview while traveling by boat to the Sao Joao do Tupe community, 25 kilometers (15 miles) west of Manaus. Many elders there told her that they feared the effects of the vaccine they had heard about on the radio.

Official government data shows a death rate of 224 per 100,000 in Amazonas state – double the national average. Some health experts believe a coronavirus variant that is more contagious and less vulnerable to some treatments has caused the dramatic spike in hospitalizations and deaths.