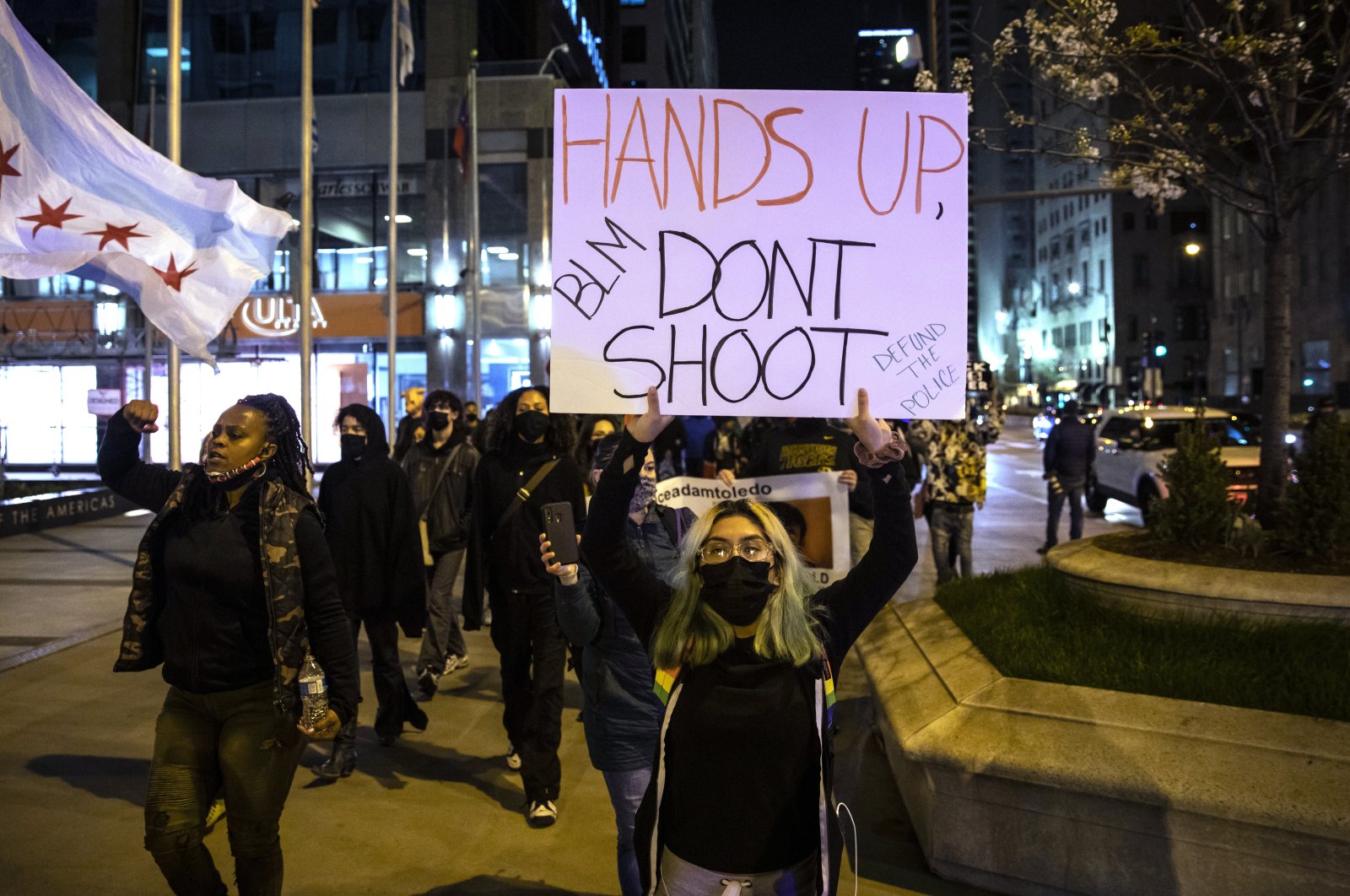 Protesters march down the Magnificent Mile after the city of Chicago released the videos of 13-year-old Adam Toledo being fatally shot by a Chicago police officer, in Chicago, U.S, April 15, 202. (AP Photo)
by French Press Agency - AFP Apr 16, 2021 12:07 pm
RECOMMENDED

The United States officials in Chicago released bodycam footage Thursday showing an officer killing a 13-year-old Latino boy two weeks ago despite the boy appearing to be unarmed and raising his hands to give himself up.

The shocking footage shows teenager Adam Toledo running from officers in the early hours of March 29 and then being hit with a single shot to the chest as he stops and raises his hands. Prosecutors say he was armed, although no weapon is visible in his hands in the video when he is struck.

Tensions over racism and policing are already high in the United States as nearby Minneapolis hosts the trial of a white former police officer charged with murdering African American George Floyd. It is taking place in the same week that a fatal police shooting of an unarmed black motorist sparked violent protests in a suburb of the city.

In a news conference Thursday ahead of the latest video's release, Chicago Mayor Lori Lightfoot called for a peaceful response from residents, describing the footage as "excruciating to watch." Small groups gathered in downtown Chicago on Thursday for peaceful protests over the teenager's death after the footage was published. "Lock the cop up!" some chanted, according to local media.

Lightfoot would not comment on whether Toledo was holding a gun when he was killed, despite repeatedly saying earlier in the week that he was. "I don't think it matters whether Adam is a choir boy, whether he is involved in some other untoward activity – the fact of the matter is that he was walking in the street and he was shot unarmed," Adeena Weiss-Ortiz, the Toledo family attorney, told reporters.

Toledo, who reportedly has American Samoan heritage, was laid to rest last week. The Civilian Office of Police Accountability is reviewing footage from body cameras worn by the responding officers and other videos, along with audio recordings from surveillance sensors.

Police responded to a report of shots fired at 2:30 am on the Midwestern city's predominantly Latino and black West Side. They chased Toledo and 21-year-old Ruben Roman – who had fired the originally reported shots, according to prosecutors – on foot.

Roman was quickly apprehended as the pair fled down an alley and the bodycam footage shows an officer cornering Toledo. Prosecutors say the boy was armed, although no gun can be seen in the footage as Toledo raises his hands.

"The officer tells (Toledo) to drop it ... as (Toledo) turns toward the officer," Cook County assistant state's attorney James Murphy said Saturday in a bond hearing for Roman. "(Toledo) has a gun in his right hand. The officer fires one shot at (Toledo), striking him in the chest," Murphy said.

The gun Toledo was allegedly holding, a Ruger 9mm, landed against a nearby fence, Murphy said, and the officer immediately rendered aid – but the 13-year-old was pronounced dead at the scene. There was gunshot residue in the youngster's right hand, and shell casings that were found where Roman had allegedly been firing the weapon matched the Ruger, Murphy added. Prosecutors have not indicated the point at which they say the gun ended up with Toledo.

"An attorney who works in this office failed to fully inform himself before speaking in court," Sarah Sinovic, a spokesperson for Cook County State's Attorney Kim Foxx, told WGN Investigates Thursday.