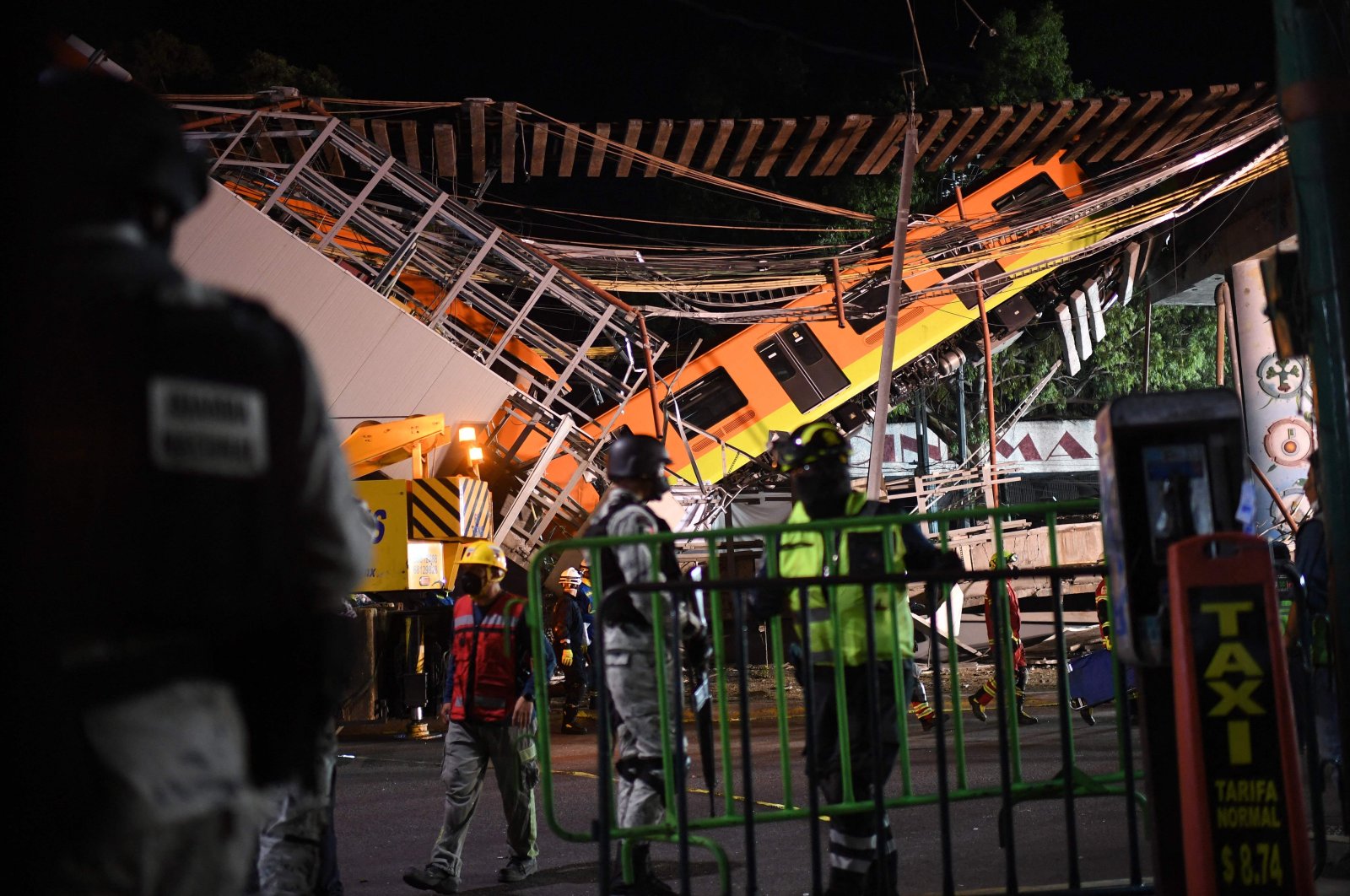 Rescue workers gather at the site of a train accident after an elevated metro line collapsed in Mexico City, Mexico, May 4, 2021. (AFP Photo)
by French Press Agency - AFP May 04, 2021 11:43 am
RECOMMENDED

At least 23 died, dozens were injured when an elevated metro line collapsed onto a road in the Mexican capital Monday, authorities said Monday.

Carriages were seen hanging from the overpass in a tangle of twisted cables with the ends pointing toward the ground in a V-shape.

"Unfortunately there are 23 deceased," including minors, Mexico City Mayor Claudia Sheinbaum told reporters at the scene in the south of the capital.

At least 79 others were injured in the dramatic accident, one of the worst to strike the Mexico City metro since it was inaugurated in 1969.

Anxious relatives gathered at the site awaiting news of those believed to have been aboard the train.

Efrain Juarez said that his son was in the wreckage.

"My daughter-in-law called us. She was with him and she told us the structure fell down over them," he told Agence France-Presse (AFP).

Another man who did not give his name said that his brother was among those trapped.

"He came with his wife and they managed to get her out, but he was crushed there and we don't know anything," he said.

Dozens of emergency workers were seen trying to rescue victims from the carriages.

But the work later had to be paused because of fears the wreckage was too unstable.

"For now the rescue has been suspended because the train is very weak. A crane is coming to continue" the work, Sheinbaum said.

A car was trapped under the rubble, but a person inside managed to get out alive, she said.

The police, who brought rescue dogs, urged onlookers to move back in case of falling debris.

"Suddenly I saw that the structure was shaking," an unidentified witness told the Mexican television network Televisa.

"When the dust cleared we ran... to see if we could help. There were no screams. I don't know if they were in shock," she added.

Medics were seen taking the injured away on stretchers.

The casualties were rushed to different hospitals in the city, Sheinbaum said.

The accident occurred when a section of the elevated tracks collapsed at the Olivos station at around 10 p.m. (3 a.m. GMT), she said.

One man, Jose Martinez, told reporters that he had a miraculous escape because he was unable to leave work in time to catch the ill-fated train.

"I was saved by like 15 minutes. It's good that nothing happened to me," he said.

The Mexico City subway has 12 lines and carries millions of passengers each day.

Line 12, where the accident struck, was inaugurated in October 2012 by then-mayor Marcelo Ebrard, who is now the foreign minister.

Writing on Twitter, Ebrard offered his cooperation with the investigation to establish the causes and responsibility for what he called a "terrible tragedy."

In one of the worst accidents on the network, two metro trains rammed into each other leaving 23 dead and 55 injured in October 1975.

The latest incident comes just over a year after two subway trains collided in Mexico City, leaving one dead and around 40 injured as panicked passengers escaped through dense smoke.

In another incident in January of this year, one person died and 29 suffered smoke inhalation injuries in a fire in the metro's control center.

The latest accident comes at a time when Mexico is struggling to cope with the coronavirus pandemic, which has left more than 217,000 people dead in the country – one of the world's highest tolls.