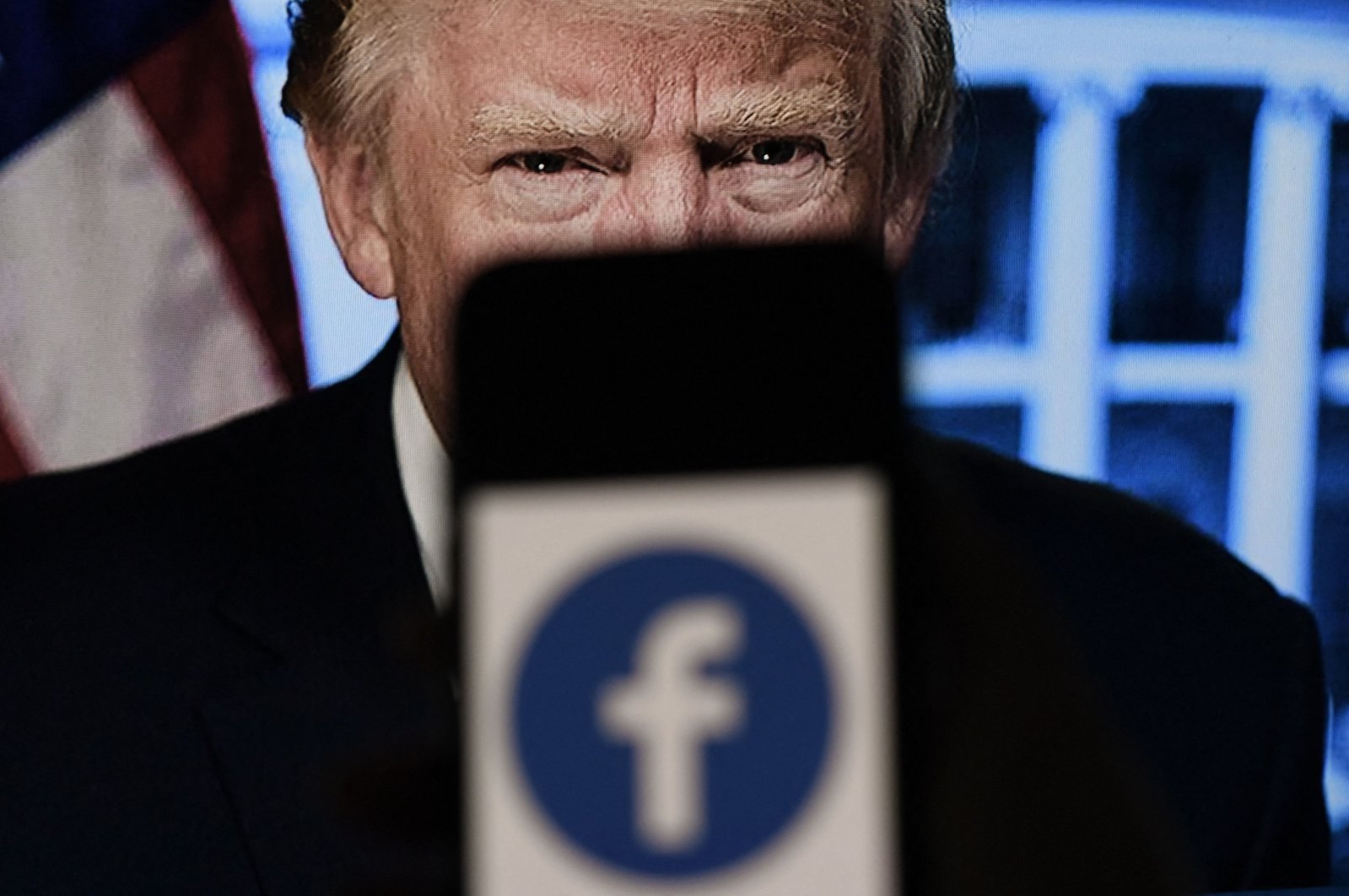 In this file photo illustration, a phone screen displays a Facebook logo with the official portrait of former US President Donald Trump in the background, Arlington, Virginia, on May 4, 2021. (AFP Photo)
by Associated Press May 05, 2021 5:38 pm
RECOMMENDED

Facebook’s Oversight Board on Wednesday voted to uphold Donald Trump’s ban from the social media platform, which was handed to the former president four months ago for inciting violence that lead to the Jan. 6 Capitol riots.

While upholding the suspension, the board faulted Facebook in a statement for the way it made the decision.

The board said the ongoing risk of serious violence justified Facebook’s suspension at the time, but said it “was not appropriate for Facebook to impose an ‘indefinite' suspension.”

The board said Facebook was seeking to avoid its responsibilities by applying “a vague, standardless penalty” and then referring the case to the board to resolve.

“Indefinite penalties of this sort do not pass the international smell test," oversight board co-chair Michael McConnell said in a conference call with reporters. “We are not cops, reigning over the realm of social media.”

“We love you. You’re very special,” he said to the rioters in the first post. In the second, he called them “great patriots” and told them to “remember this day forever.” Those violated Facebook’s rules against praising or supporting people engaged in violence, the board said.

Helle Thorning-Schmidt, a former Danish prime minister who sits on the board, said in the call that Facebook shirked its responsibility to enforce its own rules. “Facebook should either permanently disable Trump’s account or propose a suspension for a specific period of time,” she said.

Thorning-Schmidt said Facebook can’t just invent “new unwritten rules” for special users when it suits the company while everybody else has to follow their standards. “They did get it right, but they can’t have a penalty that’s indeterminate because that’s not in their own rules,” she said.

The board says Facebook has six months to reexamine the “arbitrary penalty” it imposed on Jan. 7 and decide on another penalty that reflects the “gravity of the violation and the prospect of future harm.”

It didn't say exactly how Facebook should do this, but offered a number of recommendations. One advised against drawing a firm distinction between political leaders and other influential users because anyone with a big audience can potentially cause serious risks of harm.

Among the board’s recommendations is that considerations of a political leader’s “newsworthiness” shouldn’t take priority when the company must take urgent action to prevent harm. Facebook has said it didn’t consider newsworthiness in its Trump decision, but the board said there remains widespread confusion about Facebook’s handling of influential users.

The board also says Facebook should publicly explain the rules that it uses to sanction influential users, and emphasized the need for time-bound suspensions and clear rules on how they can be lifted.

The board says the new penalty must be “clear, necessary and proportionate” and consistent with Facebook’s rules for severe violations.

The board says if Facebook decides to restore Trump’s accounts, the company must be able to promptly address further violations.

Shortly after the ruling, Trump doubled down on his election fraud claims.

"Had gutless and clueless MINORITY Leader Mitch McConnell... fought to expose all of the corruption that was presented at the time, with more found since, we would have had a far different Presidential result," Trump said in a statement.

Trump, who is mulling another run for the White House, repeated his insistence that there is abundant evidence of voter fraud, and urged his followers to "never give up."