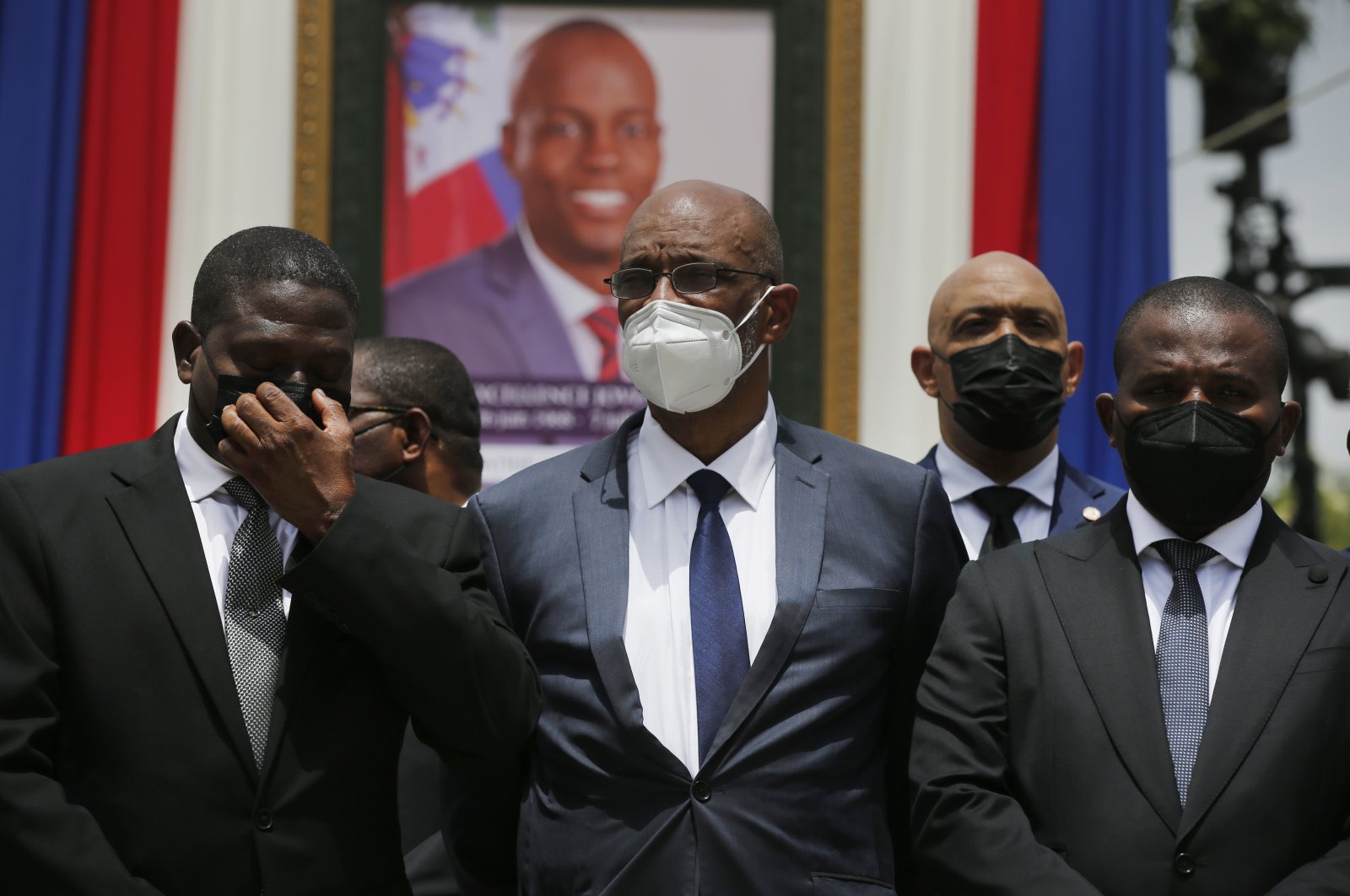 Haiti's designated Prime Minister Ariel Henry (C) and interim Prime Minister Claude Joseph (R) pose for a group photo with other authorities in front of a portrait of slain Haitian President Jovenel Moise at the National Pantheon Museum during a memorial service for Moise in Port-au-Prince, Haiti, July 20, 2021.(AP Photo)
by Reuters Sep 15, 2021 11:00 am
RECOMMENDED

Haitian Prime Minister Ariel Henry on Tuesday replaced the chief public prosecutor who had been seeking charges against him as a suspect in the assassination of President Jovenel Moise, plunging the country into a fresh political crisis.

Moise was shot dead on July 7 when assassins stormed his private residence in the hills above Port-au-Prince. The 53-year old had been governing by decree for more than a year after Haiti failed to hold legislative and municipal elections amid a political gridlock and had faced many calls to step down. His death has left Haiti in an even deeper constitutional and political crisis as it has only a handful of elected officials nationwide.

Henry, a political moderate and neurosurgeon whom Moise named prime minister just days before his death in an attempt to reduce political tensions, has sought to forge a new consensus between different political factions. But allegations over his possible involvement in Moise's killing are now overshadowing that.

Prosecutor Bed-Ford Claude said last week that phone records showed Henry had twice communicated with a man believed to be the mastermind behind Moise's killing on the night of the crime.

That suspect, a former justice ministry official whom Henry has publicly defended, is now on the run. Henry dismissed his request to discuss the matter as politicking and did not respond to the allegations. That prompted Claude to write on Tuesday to the judge overseeing the investigation into Moise's slaying and ask him to charge Henry as a suspect. He also wrote to Haitian migration services ordering them not to let the prime minister leave the country "due to serious presumption relative to the assassination of the president."

Later on Tuesday, a letter from Henry to Claude dated Sept. 13 emerged in which he said he was firing him for "grave administrative error," without going into detail. In a separate letter dated Sept. 14, he named Frantz Louis Juste to the post. It remains unclear whether the order actually is valid as Haiti's 1987 constitution mandates that the prosecutor can only be appointed or fired by the president, a position that remains vacant.

Decades of political instability as well as natural catastrophes have plagued Haiti's development. Its aid-dependent economy is the poorest in the Americas, more than a third of Haitians face acute food insecurity, and gangs have turned swathes of the capital into no go areas.

Claude had invited Henry on Friday to meet with him to discuss the phone calls with the suspect, noting that he could only summon the premier on presidential orders, but the country was without a president. Haiti's Office of Citizen Protection demanded on Saturday Henry step down and hand himself over to the justice system.

Henry retorted on Twitter that "no distraction, invitation, summons, maneuver, menace or rearguard action" would distract him from his work. The prime minister announced on Saturday that Haiti's main political forces had reached an agreement to establish a transition government until the holding of presidential elections and a referendum on whether to adopt a new constitution next year.

The agreement establishes a Council of Ministers under Henry's leadership. A constituent assembly made of 33 members appointed by institutions and civil society organizations will have three months to prepare the new constitution. Moise's own attempts at holding elections and a constitutional referendum were attacked for being too partisan.

Critics called them veiled attempts at installing a dictatorship. His supporters said he was being punished for going after a corrupt ruling elite and seeking to end undue privileges.